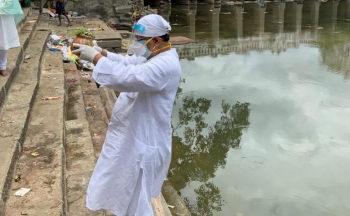 The adage blood is thicker than water seems to have outlived its relevance in Covid times. No longer are Covid patients being taken care of by the relatives and extended family due to its high infection rate and more so because of the lack of will to help and knowledge.
In fact, the help and care are coming from strangers, neighbours and social workers, unknown and unseen to those suffering the disease and loneliness. All of them together are creating a culture of genuine human bonds transcending bloodlines, religion and caste.

One such story of human love was played out in Bengaluru when Congress Rajya Sabha MP Syed Nasir Hussain took charge of ‘Aunty’ Professor Savitri Vishwanathan’s admission into hospital after she was diagnosed as Covid positive and her post-death arrangements after she passed away in the hospital.

On May 5, the hospital conveyed to Hussain the message about Savitri Aunty’s death. He called her relatives living in Tamil Nadu and informed that she would get a decent cremation as per the Tamil Brahmin rituals. He ensured it; further, Hussain and his wife travelled with Aunty Savitri’s ashes to Mysore where they immersed it in the waters of the Cauvery amid chanting of mantras by a Hindu priest.

The last ritual of immersion of ashes is strictly the prerogative of the son or the blood relative of the diseased. Hussain proved to be more than a son!

Hussain told media that Savitri Vishwanathan, a retired professor of Japanese studies from the University of Delhi, “was our aunt, neighbour and a colleague” and he had shared a long bond with her.

Ravi Koul, a diabetic patient living in Delhi NCR, was suddenly hit with a massive responsibility. All members of his family -- aged parents, two grown-up children and his wife -- were tested Covid positive. He was the most vulnerable and yet supposed to take care of everyone including his octogenarian father who suffers from Parkinson’s and is dependent on others for eating, moving and going to the toilet.

He called his sister, who lives in the same city, for help. She backed out. Ravi broke down under pressure and the huge responsibility. As a last resort, he sent out a message in the Residents Welfare Association group of his society, where he had moved only last year and didn’t have many friends.

In no time, Ravi was flooded with messages of assurances and concrete offers of help. Someone arranged a trained male nurse to take care of his father; someone sent food; the chemist in the neighbourhood told him he is just a call away.

Ravi says, “From that moment, I never felt helpless; friends and colleagues would call to keep me in good humour. I was shocked to notice that my sister never called even once.” He said the family switched off TV news and also refused to take calls from relatives most of whom tried to give them unverified tips on health.

Ravi says his perception about life has changed. He is looking forward to his own recovery – he too couldn’t escape the virus – and wants to visit the nearest Gurudwara which offered people like him hope by opening an ‘oxygen langar.’

In Lucknow, an artist couple Nandita and Keshav Pandit tested positive for Covid in the first week of May. They had a teenage daughter to take care of them. Nandita taught violin to neighbourhood kids and she continued her online classes even from quarantine.

To their surprise, every day the family would get packed sumptuous meals with a note “get well soon and home-cooked food” scribbled on it. Someone would keep it on the threshold of their house. In spite of the family’s best efforts, the identity of the person sending them food every day remains a mystery.

Azra Mobin, the 35-year old mother of two from Lucknow, was into small-time social work till one day she received a call from someone identifying himself as Gaurav. He was crying on the phone as he sought her help.

Gaurav’s father Mulchandra Srivastava had died of Covid-19. His entire family was infected with the virus and in quarantine. Gaurav being a diabetic was at the higher risk of contracting the virus and hence advised against attending to the corpse of his father.

Azra wore her PPE kit and took charge of the body of Mulchandra  from the hospital and moved in an ambulance to the cremation ground.

She thought she might faint in front of the pyre in the PPE kit because it was Ramazan and she had been on a fast.

Soon Azra was receiving more calls and she sent her children to her mother’s home. She carried on cremations of people unknown to her in their life. One day she got a call from Aman Srivastava.

He was calling from the roadside in Raibareilley where he had come to see his mother in hospital only to realize she had just passed away. It was late night and he wept bitterly. Azra, a total stranger to Aman, kept consoling and assuring him that she will reach him early morning.

Aman’s desperate cries kept echoing in her mind long after she had helped him cremate his mother’s body.

She called him but he didn’t respond. One day finally a call at the other end spoke. She was Aman’s sister. She broke the news about Aman’s passing away in a road accident.

Azra now keeps in touch with Aman’s sister and has assured her of any help she needs. Who says blood is thicker than water?