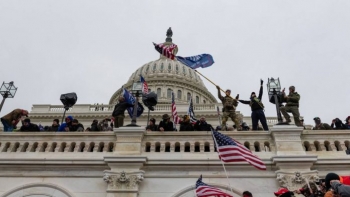 Even a President can incite a mob!
A Lawmaker inciting men and women to become lawbreakers!
What the world saw happening to the greatest democracy on earth should be a lesson they should never forget!
On my visits to the US, and to Washington, standing outside the fence of the White House, I was told that one wrong movement and I was a gonna! That there was no need to show soldiers all around, men in uniform with machine guns, because security was hidden. But on that fateful Wednesday night in Washington, as senators and congressmen ran for cover to hide themselves from a violent mob, what was exposed was the lack of safety! Because the muscle of a mob is more powerful than that of a disciplined police or army.
Obviously, Trump knew that.
But Trump is a mad man, hopefully leaders around the world are made of saner stuff than him, because, though his ego is satisfied, that rioters wanted to reverse his defeat, he couldn’t care less of what the world now thinks of his country!
The rest of America is ashamed of itself. He isn’t!
Like I said, hopefully, other leaders across the world, love their country more than themselves. The lesson they should take home is, when you incite a mob, a mob being headless, will break the very fibre of law and order that a civilized nation is formed of.
Again we also need to understand, that we don’t Like Trump, need tweets and FB accounts to incite people, that when you pass unfair laws, comment scathingly on religious communities, you are actually fueling the fire of violence!
It’s so easy to form a lynching party of a billion!
“Come on let’s string him up. Because if he is around, he will steal our daughters and wives!” shout leaders, and within minutes a rope is tied, and someone hangs. Nobody in the lynching party, thinks that in stringing the man up, they are actually saying their women are incapable of thinking for themselves. Nobody, realizes that in stringing the man up, they are saying they themselves are inadequate to win and keep the love of their womenfolk!
No, because a mob doesn’t think!
It’s not just politicians who incite a mob, it’s TV anchors too. The rampage that happens, may not be as apparent as broken furniture, burnt homes, and victims killed! The destruction could be friendships broken, distrust creeping in and a polarized nation!
What we saw on TV at the Capitol in Washington, though horrible and macabre was still the tip of the iceberg, of the underlying hate that has been incited, nay ignited!
There are many Trumps across our world, not necessarily only in China and North Korea, some closer home, as America found out, let us guard our minds against them..!