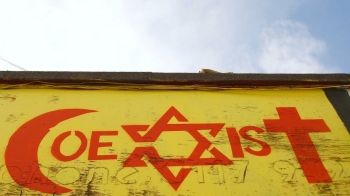 BUILD HARMONY - Mission of the Disciples of Jesus in India Today

“Divide and rule” has been a strategy used for acquiring power and remaining in power by rulers and politicians. Politicians in general are successful in using this strategy because of the disharmony that exists among the different communities. Political parties and political leaders can exacerbate disharmony in a particular society or country by polarizing people on the basis of religion, caste or language. Analysing the causes of disharmony and removing those causes are essential to build harmony in any society. If people are conscious of the means that contribute to harmony and practice them, it would be difficult for the political forces to play the game of identity politics. On the contrary, they will focus on developmental and governance issues like employment generation, improving education, and enhancing health care services. Hence building and fostering harmony among different communities are essential to prevent the political parties from playing religious or caste card.

All the three root causes are interrelated. For example, the Crusades between Christians and Muslims, which lasted for about 200 years, was mainly based on religious identity and had the primary motive of occupying the Holy Lands. St. Bernard of Clairvaux wrote in 1140, “Of mighty soldiers, oh men of war, you now have something to fight for. If you win it will be glorious. If you die fighting for Jerusalem, you will win a place in heaven”. The crusaders were also promised forgiveness of past sins if they took part in the war.

But some historians are of the view that while the primary motive might have been religious, many crusaders were motivated by greed and lust for power. They point out the example of crusaders slaughtering fellow Christians in Constantinople during the first crusade and taking control of Edessa, which was not on the route to Jerusalem and did not contain any holy site. It is evident from historical records that many people took part in crusades with mixed motives, lust for wealth and power being the prominent ones after the religious motive.

The conflicts and wars among the European powers during the colonial period were motivated by greed for accessing the raw materials and wealth of the colonies, and there was stiff competition among them to occupy the colonies and possess their wealth. Between 1689 and 1763 there were no less than four colonial wars that involved France, Britain and Spain and their respective colonial possessions.

In modern times, America under the leadership of President George W Bush declared war on Iraq, accusing Iraq of possessing Weapons of Mass Destruction and supporting and aiding terrorists. According to some geopolitical analysts, the Iraq war was motivated by a desire to establish America standing as the world’s leading power. Hence the real cause of the war was greed for power. The result of the Iraq war was disastrous not only for America but also for the whole world. The war cost trillions of dollars, killed hundreds of thousands of Iraqis, destabilized the region, and helped to create the Islamic State of Iraq and Levant (ISIL).

Climate change and its disastrous consequences, which are highlighted by Pope Francis in his encyclical Laudato Si, are the result of human greed. “The human environment and the natural environment deteriorate together; we cannot adequately combat environmental degradation unless we attend to causes related to human and social degradation. In fact, the deterioration of the environment and of society affects the most vulnerable people on the planet… The impact of present imbalances is also seen in the premature death of many of the poor”. (#48)

The world has seen many conflicts and wars based on identities like religion, ethnicity, race and language. The second Congo War, Second Sudanese Civil War and Sri Lankan Civil war are a few examples for civil wars based on ethnic identity. According to Wikipedia, in the second Sudanese civil war, roughly two million people died as a result of war, famine and disease caused by the conflict. Four million people in Southern Sudan were displaced at least once.

Exaggerated emphasis on a particular identity like, religion, caste ethnicity leads to conflicts among different sections or communities in a society. In many societies, the phenomenon of majority and minority exists. The minority is often afraid of losing its identity, and feel insecure when the majority tries to impose on the minority its religious and cultural norms and practices. The majority, when it becomes too conscious of its identity, can feel threatened by the minority increasing its influence and power. Political parties can easily exploit the mutual fear, suspicion and prejudice of the minority and the majority.

The Bharatiya Janata Party (BJP) enhanced its political power and influence by feeding the fear psychosis of the Hindus that the Muslims will one day become the majority and destroy the Hindu religion and culture. It invented poisonous jargons like “pseudo secularism”, “minority appeasement”, “love jihad etc. to polarize the Hindu votes; it continues the same strategy to win elections. The latest salvo used by Yogi Adityanath, the UP CM, is “Abba Jaan”. While addressing a gathering on 12th September, he accused the previous governments of practising “appeasement politics” and claimed that only “people who say “Abba Jaan” received ration in the state, till the BJP took over the reins. His statement is not only malicious and hate-filled but also blatantly untrue. Still our prime minister was generous in praising Yogi Adityanath for his excellence in governance.

Against this backdrop, the disciples of Jesus have to seriously reflect what their mission today is.  Jesus, through his life and teachings, has shown to the world how the disharmony caused by obsession with identity, greed and competition could be overcome. His vision, ‘Kingdom of God’ or ‘Reign of God’, is broad and inclusive. He called upon his disciples to transcend the lower identities and focus on the highest identity i.e. divine presence in every human being. We also read in the book of Genesis that God created human beings in his image and likeness. It clearly says that God’s presence is primary in human beings althought God’s presence is also experienced in the whole creation. The only prayer Jesus taught his disciples is also an invitation to transcend the lower identities like rite, religion, caste etc, and focus on the highest identity that all human beings are sons and daughters of one and the same God; hence brothers and sisters.

Jesus before leaving this world gave an identity to his disciples, LOVE. “A new command I give you: Love one another. As I have loved you, so you must love one another” (Jn.13:34). This saying of Jesus is to be correlated with Jesus’ statement in Mt. 25:40: “Truly I tell you, whatever you did for one of the least of these brothers and sisters of mine, you did for me.”  The love Jesus has taught his disciples through his own life and teaching is an all inclusive love, transcending all boundaries. The commandment of LOVE by Jesus is the basis of all Christian charitable and developmental activities.

The love Jesus taught his disciples demands unconditional forgiveness and total liberation from hatred, revenge and enmity. A person who entertains hatred towards another person or community is a bogus Christian. ‘If anyone says, “I love God,” and hates his brother, he is a liar; for he who does not love his brother, whom he has seen, cannot love God whom he has not seen’ (1 Jn. 4:20). The followers of Jesus are not expected to be hate mongers and rabble rousers. If the followers of Jesus have to become builders of harmony, first of all, they have to say a firm ‘no’ to identity politics.

While addressing a gathering during his recent visit to Hungary, Pope Francis told the audience, “We shall commit ourselves to fostering together an education in fraternity, so that the outbursts of hatred that would destroy fraternity will never prevail”. He also told them, “If we want the river of the Gospel to reach the lives of people, making a more fraternal and solidarity society in Hungary, we need the Church to build new bridges of dialogue”.

The followers of Jesus also may have the temptation to increase their power by increasing their number, and this can lead to competition with the followers of other faiths. Power is also increased by increasing wealth. Hence greed can be the motivation for institutional expansion by the followers of different religions. Christians also can become the victims of this tendency of institutional expansion under the guise of service for enhancing their material and political power.

Through various examples Jesus has taught his disciples to share their wealth with the needy instead of amassing wealth. The disciples of Jesus are expected to desist from competition to amass wealth and power, but to share their wealth with the needy. The power of a disciple of Jesus should not be based on wealth and number of people under his/her control, but it should be moral power emanating from authenticity. Jesus and Mahatma Gandhi are sublime models of moral power.  Christian leaders are expected to be role models of moral power in order to become builders of peace and harmony.

When fundamentalist forces are spreading hatred, enmity and division in different parts of the world and also in India, the disciples of Jesus are expected to become facilitators of peace and harmony by following the way of Jesus. In order to fulfil this task, they need to be liberated from identity politics, greed for wealth and power, and cutthroat competition. They have to become role models of inclusiveness, generous sharing of resources with the needy, and collaboration and cooperation with people of all faiths and cultures.  Let them listen to what Pope Francis says.

“We Christians bring peace and grace as treasure to be offered to the world, but these gifts can bear fruit only when Christians live and work together in harmony. This makes it easier to contribute to building relations of respect and peaceful coexistence with those who belong to other religious traditions, and with non-believers”.