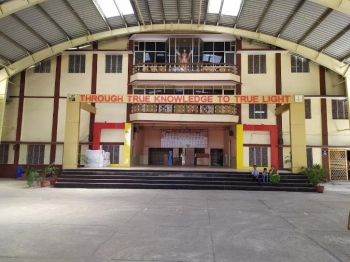 Church attacks on Sundays have become a regular feature these days. A group of fanatics vandalized an independent church in Satna in Madhya Pradesh on October 31 and threatened the congregation of dire consequences if they did not return to Hinduism. On police intervention, the radicals gheraoed the Kholgawa police station and protested against senior police officers and other authorities. The cops resorted to lathi-charge to disperse those indulged in violence.

Pastor Biju Thomas of the Church of God said that the church was functioning for the past 36 years and has been a blessing for the local community. He narrated the incident: “One Vikas, a youth, entered the church along with the congregation and in the middle of the worship called other fanatics inside and interrupted the service. They called for police and tried to lodge a complaint alleging converting Vikas forcibly. To this, the congregation opposed and testified that they voluntarily attend the church service for prayers. Police on interrogation found that Vikas was a mole planted by the Bajrang Dal. The local protesters went over to the police station and pressurized the police to file an FIR against the Church.”

In another incident, Vishwa Hindu Parishad activists, on October 25, had served a 15-day ultimatum to the Christ Jyoti School, run by the Syro-Malabar diocese in Satna, to install an idol of Saraswati, the goddess of knowledge, on the campus. They were told to comply with their demand or face dire consequences. District-level Bajrang Dal leader Sagar Das Gupta justified the demand stating that 98% students are of Hindu faith and thus the statue needs to be installed.

A delegation of the Vishwa Hindu Parishad and Bajrang Dal met Father Augustine Chittuparambil, manager of the school, and pressed for their demand. The activists claimed that the school was built at a place where the idol of goddess Saraswati had existed. The school was built 49 years ago and has been imparting quality education to the local students. The incident seemed to be instigated keeping in mind the by-polls held on October 30 in Satna.

Fr Augustine has denied the existence of any statue inside the campus in the past. After the threat, a Catholic delegation met the SP and the Collector and the police have assured the school management of protection. The church is located at a different place along with the Bishop’s House. “An effort has been made to disturb the social peace in the area. With over 3000 students in the school, the parents have no problems,” he added.

Meanwhile, addressing a three-day workshop of office-bearers in Madhya Pradesh, RSS leader Dattatrey Housbole said, “Conversion should stop in India. People, who are converted, should make it public. There are many who have adopted Christianity, but have not revealed it in the public. They have been taking double benefits and this should stop. RSS will welcome any law on conversion.”

The Constitution of India provides freedom of practicing any faith and adopting any religion. Article 25 says every citizen has the freedom to proclaim, preach and propagate one’s religion. There are enough laws in the country to punish the violators propagating forcible conversion, or for using any unfair means of allurement. Above all, anti-conversion laws have been introduced in several States. The peace-loving Christian community is being treated like terrorists under stringent laws.

In Karnataka, the Backward Classes and Minorities Welfare Department has sent a circular to the police, to take a headcount of the churches of all denominations and collect their contact details. In fact, the minority department has the list of all churches, but post-survey the smaller worshipping places located in houses may be harassed terming them unauthorized.

‘Unauthorised’ could mean lack of all permissions for the building or to conduct a church service. It is not easy to get permission to build churches or places of worship across the country. We have to produce 15-20 certificates, ranging from environment to health, police, municipality or panchayat, fire department, etc. For the smaller churches, it is not easy to get all these due to the bureaucracy. Secondly, based on this survey, the Government may ban the house worships and prayers, terming them ‘unauthorised’ meetings.

Archbishop Peter Machado of Bengaluru Archdiocese says the Christian community is peaceful and sometimes pacifist, they don't speak out loud. “We will not do anything that goes against the Constitution; if you want to check the list of our churches, take the list of our institutions also. Our schools, hospitals, and social service centres are rendering service to the public; take a list of them and judge them. I have even challenged the government and said that in Bangalore alone we have more than two lakh students in our schools and colleges. Give me one example of conversion taken place there. In the corona time, our hospital admitted one thousand patients at one time... They were desperate and dying… any conversions there?” he asked.

Human rights groups which monitor atrocities against Christians in India have documented the violence by Hindutva groups from all states and released a fact-finding report titled ‘Christians under attack in India’. The report highlights over 300 such instances reported from across 21 states, particularly North India, in nine months of this year.

In a rally organised in Chhattisgarh’s Surguja district, Swami Parmatmanand called for targeted killings of minorities involved in the alleged forced conversions. “I am a saint. I don’t care, I will tell you clearly. Keep a lathi at home…In our villages, people keep hand-axes.

Why do they keep axes? Why do you keep a farsa? Behead them – those who come for conversion. Now you’ll say that I am spreading hate, although I’m a saint. But it’s important to ignite the fire sometimes. I am telling you; anyone who comes to your house, street, neighbourhood, village, don’t forgive them,” he said.

What’s more worrying than the swami’s exhortation to hundreds of his listeners to behead Christians is the fact that influential leaders of the BJP in Chhattisgarh like Ramvichar Netam, Nand Kumar Sai and BJP spokesperson Anurag Singh Deo were present on the stage.

“We can’t see these attacks in isolation of the nationwide bogey of forced mass conversions being propelled by the Sangh Parivar and the BJP. The Home Minister and his law enforcement machinery must be forced to check violent acts of terror against Christian minorities. Instead, the victims are being threatened and incarcerated. This shows how our institutions have collapsed, both legally and morally,” said William Michael, leader of the United Christian Forum.

While on one side efforts are on to woo the 44 % and 24 % Christian voters in Manipur and Goa respectively by Mr Modi’s meeting with the Pope, on the other hand attacks on the Community are on the rise. It’s up to the minorities and the intellectuals to distinguish between the sheep and the wolf.