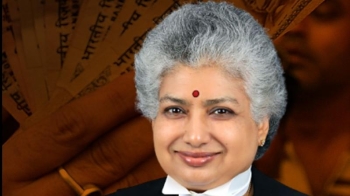 Justice Nagarathna: The Courage of ONE

Justice B V Nagarathna is making waves! In the first two working days of the Supreme Court in 2023, she gave dissenting judgment, not once but twice in quick succession. In both instances, the judgements were given as a member of a Constitution Bench comprising Justices S Abdul Nazeer, B.R. Gavai, V Ramasubramania, A.S. Bopanna and herself; besides, in both cases she was the lone dissenter with the majority view prevailing at 4:1. Not easy to do so!

Justice Nagarathna has, however, been unflinching and undeterred: her views have certainly not gone unnoticed. Both the print and the electronic media ( including the majority pro-establishment ones ) have provided space and given necessary coverage to her views. There are several editorials and op-eds singing paeans to her judgements -- with legal luminaries, academics and other intellectuals vying with each other to critique her judgements, and, at the same time, provide grist to the mill.

The reasons for doing so are obvious and they include:

•    Justice Nagarathna is not one of the runs-of-the mill judges; she thinks and voices her opinion without fear or favour; she is fiercely independent.
•    Her two recent dissenting verdicts (as have many of her previous ones) prove her mettle. She makes it amply clear that she knows the law, that she is an authority on the Constitution and that her judgements are technically sound.
•    India is a democracy and any form of non-violent dissent should be encouraged and accepted for the furtherance of the democratic spirit. The regime that rules the country today does not take kindly to dissent. Those who dissent. take a visible and vocal stand for truth and justice, are hounded and harassed, incarcerated and even killed. The powerful, vested interests stop at nothing! The ruling regime and their ilk tried to ‘celebrate’ the majority verdict in support of demonetization; however, these ‘celebrations’ became rather muted when analysis after analysis on Justice Nagarathna judgement showed that demonetization was not only unconstitutional but patently against the people of India.
•    The country is still very patriarchal; male chauvinism rules the roost. The Supreme Court is still a male bastion. Justice Nagarathna was the lone woman on a Bench with four male Judges. It requires grit and determination to think differently. She seems to have broken the glass ceiling!

In the demonetisation verdict, she disagreed on many aspects with the majority judgment. In the second verdict, regarding hate speech by ministers, she disagreed on a couple of crucial aspects, while agreeing with some of the other conclusions. Nevertheless, hers was a dissenting view.

On ‘demonetisation’ she minced no words. In her minority verdict, she held that the demonetisation of the Rs 500 and Rs 1,000 currency notes was vitiated and unlawful. “In my view, the power of the central government being vast has to be exercised through a plenary legislation rather than by an executive Act by issuance of notification. It is necessary that Parliament, which consists of the representatives of the people of the country, discusses the matter and thereafter, approves the matter.''

She said the proposal originated from the Centre while the RBI's opinion was sought and such an opinion given by the central bank cannot be construed as a ''recommendation'' under section 26(2) of the RBI Act. She stated, ''Parliament is often referred to as a nation in a miniature. It is the basis of democracy. Parliament provides representation to the people of the country and makes their voices heard. Without Parliament, democracy cannot thrive. Parliament, which is the centre of democracy, cannot be left aloof in a matter of such critical importance.'' Her statements are so powerful that it is highly unlikely that this Government or any future one will play with ‘demonetisation’ without the due process of law.

The one on ‘hate speech by ministers’ is another spectacular dissent. Justice Nagarathna proposed to hold the government vicariously liable for some of the statements that ministers make. This was in direct contradiction to the opinion of the other four judges on the bench, who said, "A statement made by a minister even if traceable to any affairs of the state or for protection of the government cannot be attributed vicariously to the government by invoking the principle of collective responsibility”. While concurring with the majority on other issues in the matter, including that a restriction, greater than what already exists under Article 19(2), cannot be imposed on free speech, Justice Nagarathna dissented on this key point.

For Justice Nagarathna if a minister indulges in hate speech in his “official capacity”, then such disparaging statements can be vicariously attributed to the government. She justified this by saying that, “Hate speech strikes at the foundational values of the Constitution by marking out a society as being unequal. It also violates the fraternity of citizens from diverse backgrounds, which is the sine qua non (an essential condition) of a cohesive society based on plurality and multiculturalism such as in India...”

Her minority verdict is important given the fact that senior leaders of the ruling regime indulge in venomous hate speeches with impunity. We saw this in the case of Pragya Thakur in Shivamogga recently. These leaders cloak themselves with immunity and literally get away with murder. In her dissenting view, she emphasised on human dignity, and the preambular goals of liberty, equality and fraternity. The Supreme Court is also presently hearing pleas seeking a curb on the spike in instances of hate speech. In this light too, Justice Nagarathna’s view that public functionaries need to understand "the likely consequences (of their speech) on public sentiment" becomes very significant.

If all goes well and without any interference by the Executive in the functioning of the Judiciary, Justice Nagarathna is expected to become the Chief Justice of India in 2027. That will be a historic moment for the nation, since she will be the first woman who will assume the position of eminence of the Apex Court. However, she will have an extremely short tenure as CJI -- just thirty-six days in office.

But perhaps, at this juncture, she may have to walk alone. One is reminded of those immortal words by our Nobel Laureate Rabindranath Tagore in his ‘Ekla Chalo Re’:

Prophets, pioneers and those who dare to walk the unbeaten path, where angels fear to tread have often to walk alone. We have seen so often in history that the role of these great women and men is only understood and appreciated long after they have gone. These are people who have stood up for what is right, for truth and for justice. It is not easy to do so: but their courage, their conviction and their commitment have stood the test of time.  Justice Nagarathna walks alone today. She epitomises all that the idea of India is about and for what the people of India yearn for. The nation needs the likes of her at this critical moment of the country’s history and will be ever grateful to her. She must continue with her strong voice for justice and for truth – whatever the consequences. She is the courage of one. Satyameva Jayate!