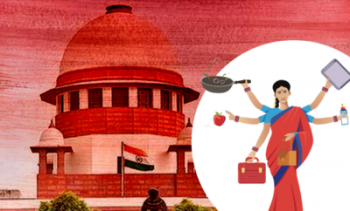 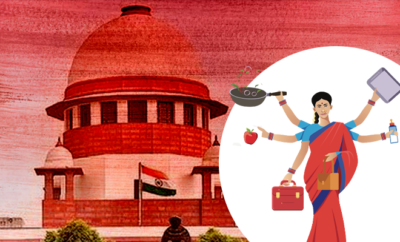 In spite of the enormous amount of unpaid work women do, the conception that homemakers do not ‘work’ and add to the economic value is a problematic concept that must be overcome, the Supreme Court of India ruled in early this month.

Supplementing the judgment of Justice Surya Kant, Justice Ramana drew attention to the bias against valuing women’s work by quoting the Supreme Court judgment in Arun Kumar Aggarwal v. National Insurance Company Ltd. (2010) 9SC218: “This bias is shockingly prevalent in the work of Census. In the Census of 2001, it appears that those who are doing household duties like cooking, cleaning of utensils, looking after children, fetching water, collecting firewood have been categorized as non-workers and equated with beggars, prostitutes and prisoners who according to the Census are not engaged in productive work. As a result of such categorization, some 36 crore women have been classified as non-workers in Census 2001.”

One method of computing the notional income of a homemaker for the purpose of payment of compensation is by using the formula provided in the Second Schedule of the Motor Vehicle Act,1988, which has now been omitted by the Motor Vehicle (Amendment) Act 2019. The Second Schedule provided that the income of a spouse could be calculated as one-third of the income of the earning surviving spouse. The rationale behind fixing the ratio as one-third is not very clear, Justice Ramana pointed out.

There are, however, other rational methods of calculating a homemaker’s notional income. One is the ‘opportunity cost’ which evaluates her wages by assessing what she would have earned had she not remained at home. The second is ‘partnership method’ which assumes that marriage is an equal economic partnership and in this method a homemaker’s salary is valued at half her husband’s salary. A third is the ‘replacement method’ where through careful evaluation one determines how much it will cost to replace the homemaker with paid workers.

The main argument raised by the Insurance Agency against the order of the Motor Vehicle Accident Tribunal concerned the payment of 40 percent of the total compensation for ‘future prospects.’ The argument that no such ‘future prospects’ ought to be allowed for those with notional income is both incorrect in law and without merit considering the constant inflation-induced increase in wages, the Supreme Court order said. The grant of future prospects with respect to homemakers for grant of compensation on a pecuniary basis is a settled proposition of law, the order pointed out.

Courts normally face two kinds of situations to determine notional income. First, where the victim was employed but the claimants cannot prove actual income. In such cases, the court fixes the income on the basis of qualification, general earnings in the field, quality of life being led by the victim and her family. The second situation is with regard to determining the notional income of a non-earning victim/s, like children, students or homemakers.

However, Justice Ramana said that there can be no fixed approach for fixing the notional income of a housewife. In such cases, the attempt by the courts is to fix the approximate value of all the work that a homemaker does. Courts must award just compensation in such cases, he added.

During arguments of the case, it was mentioned that the High Court reduced the compensation awarded by the Tribunal following a consensus reached by the counsels. “…any concession in law made in this regard by either counsel would not bind the parties, as it is legally settled that advocates cannot throw away legal rights or enter into arrangements contrary to law,” the Supreme Court ruled.