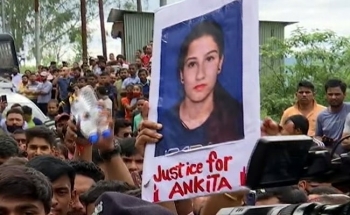 That in economically challenged times many victims seem to believe silence is safer when it comes to reporting sexual harassment at workplace is a cause for concern.

The epicenter was Rishikesh, Uttarakhand. But the aftershocks were national. But for the massive public outrage, the recovery of the body of a 19-year-old from the Chilla Canal in Rishikesh this September 24, after she went missing on September 18, would have been just another death.

Well, her autopsy report found injury marks on her body before death, suggestive of blunt force trauma. However, the cause of death was due to drowning, nonetheless, it has brought to fore a classic real-life case of violation of fundamental rights guaranteed by the Constitution of India. That is the right to practice any profession as also live with dignity and honour.

The deceased teenager, daughter of an anganwadi worker, after securing 88 percent in Class 12, pursued a course in hotel management. To support her elder brother who was aspiring to become a chartered accountant, she became a receptionist at a resort in Rishikesh for a monthly salary of Rs 10,000. But sadly enough, she didn't live to receive her first salary.

What has been disclosed about her is more disturbing. Reportedly she was feeling insecure at her workplace after the owner of the resort where she worked put pressure on her to provide "extra services" (indulge in prostitution) and serve hotel guests. The enraged resort owner, according to his confession, after an altercation, pushed her into the canal. Suffice to say that the ongoing investigation by a specially constituted police team is expected to bring the offenders to book.

The workplace harassment experienced by the deceased teenager is just a tip of the iceberg. Remember five years ago how the daily sexual abuse suffered by women, led to the #MeToo movement and within a year, it is said that the hashtag had been used more than 19 million times. It is a global menace and atrocities against women is on the rise and India is no exception.

What is worrying is that sexual harassment occurs on public transportation, in park and similar public places, in educational and athletic settings, in homes, at social gatherings and in online groups. It gets conveyed in many ways be it face-to-face interactions, through phone, SMS, social media, or by e-mail.

In 1997, the Supreme Court in Vishaka and Others vs State of Rajasthan had dealt with sexual harassment of women. For this purpose, sexual harassment includes such unwelcome sexually determined behaviour (whether directly or by implication) as:

a) physical contact and advances;
b) a demand or request for sexual favours;
c) sexually coloured remarks;
d) showing pornography;
e) any other unwelcome physical verbal or non-verbal conduct of sexual nature.

The Apex Court also elaborated the preventive steps that all employers or persons in charge of work place in the public as well as private sector should take. Most importantly the Court recommended the institution of a complaint mechanism in the employer's organization for redress of the complaint made by victim of sexual in a time-bound manner. Broadening the Vishaka Guidelines, the Union Government enacted the Sexual Harassment of Women at Workplace (Prevention, Prohibition and Redressal) Act in 2013. It has defined sexual harassment and laid down the procedures for complaints, conduct of inquiry and the action to be taken.

If news reports are to be believed, implementation of the law has not been quite effective. Let's take the case where recently the Delhi Commission for Women (DCW) pointed out the “sorry state of affairs” in the implementation of the Act intended to prevent Sexual Harassment of Women at Workplace. According to DCW the Local Complaints Committee supposed to function in every district received 40 complaints between 2019 and 2021. Recommending the need for establishing an efficient complaint receiving mechanism online as well as offline, DCW's grouse is that the small number of complaints received by the LCCs were not dealt with in a time-bound manner.

What is disconcerting is that many women choose to remain silent despite experiencing sexual harassment. It's because the pressure to furnish proof, the fear of fighting a superior, its adverse impact on their career, etc.

Not long ago a 22-year-old woman who was allegedly raped by her employer, a powerful builder, for four years mustered courage and approached the police in Nagpur when she couldn't take it anymore. Though the builder was married, he wanted to continue to maintain physical relationship with her. In spite of repeated requests of the victim, the accused did not desist from sexuality assaulting her. When she started refusing, the accused threatened to defame the victim in her own house and in her family by showing her photographs to her parents.

More recently, a 23-year-old female bus marshal allegedly tried to kill herself after facing sexual harassment at work. The bus conductor, in which she was deployed as a marshal, allegedly started asking her for sexual favours.

As many workplaces still remain unsafe for women, there is an imperative need to follow the Supreme Court's Vishaka guidelines in letter and spirit and create a conducive work environment.