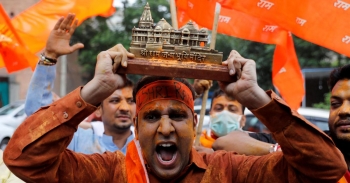 The people look towards the 2024 general elections with mixed feelings. Some are in an expectant mood. They are the right-wing Bharatiya Janata Party members and devotees hoping to get a thumping majority to have another term for their Hindu majoritarian rule.

Many others are in a revolting mode and say ‘enough is enough, move over Modi and Parivar rule.’ There are some others, feeling the weight of unemployment, price rise and poverty, are not in a mood to digest the unfulfilled promises of a Ram Rajya.

The ‘chai pe charcha’ intellectuals scratch their brain to add fire and fuel to heated discussions on what should be and what should not be! The ‘godi’ media, enjoying the cozy shade of the ruling dispensation, is crawling on all fours and bringing to bursting point its vocal chords to sing glories to their crumbs-throwing masters.

There are more ground realities. The house wife in the kitchen is cursing her misfortune of having to use gas stove. Those poor who were taken for a ride by having been gifted with ‘revdi’ gas cylinders as the benevolence of the Modi dispensation feel cheated because they cannot afford to get refills at an exorbitant rate. Those who clapped and cheered when Prime Minister Modi fed their eager ears with the promise of Rs. 15 lakh from the Swiss banks are wondering how to vent their anger at being taken for a jumla ride.

The litany of frustrations is unending. Ever since the Bharatiya Janata Party took over the reins of power at the Centre, the nation has been getting dragged into the quagmire of violence, communal tension, hate mongering, and the like. The so-called fringe elements with politically infused fanatical frenzy went ballistic, got emboldened and became a mainstream bulldozer force and a tool to target members of minority communities, to destroy shrines and churches, to lynch people for the cause of protecting their Gau Mata.

Unleashing visceral hatred particularly against Muslims and treating them as alien enemies have been felt by the Muslim community as an ‘unkindest cut’ in this so-called tolerant India. Christians, Dalits and Adivasis too have been becoming the target of attacks and ill treatment by members of the majority community and its leaders.

One wonders how one can understand the verse from Maha Upanishad: ‘Vasudhaiva Kutumbakam’ (the whole world is a family). This concept is said to arise from the understanding that all human beings are emanated from the divine. However, when it comes to the living reality, we are facing an ever-growing intolerant force that dictates to us how to live, how to think, what to eat, whom to converse with or which religion to follow. Where is the tolerance of the Dharma Samhita when they beat to death a dalit boy who happened to drink water from a pot of water in a school? The pot was reserved to the upper caste teacher under Manusmriti rule in a public school. How do you explain to the world the intolerance when eleven of your comrades did gang rape a 21-year-old pregnant Bilkis Bano and killed her three-year-old daughter in front of her and killed seven members of her family in front of her? How does one understand the act of the state government that had the ignominious audacity to recommend release of those eleven convicts and the court signing on the dotted lines? The convicts, on premature release, were treated as heroes with garlands and sweets. When people’s moral sense goes haywire, one wonders what the so-called tolerance is all about!

Is this intolerant India we want to carry to 2024 and beyond? If ever the Sangh Parviar gets another chance to govern this secular, democratic nation, how sure can we feel about its not wiping away all traces of the secular and democratic foundation?

The national assets and resources are being treated like private property and are sold out like fodder to cronies and crawlers. Even street vendors are speculating whether this nation is going to face another Sri Lankan-type crisis? Freedom of ex

The reported Secret Circular of RSS (Circular no. 411) issued a few years back has sinister implications in the post-2024 election scenario if BJP captures power at the Centre. The circular is evidently targeted to destroy the very identity of all minorities, the Dalits, the Mussalmans and the Christians.  Sample a few: “The Scheduled and other backward castes are to be recruited to the party as volunteers to fight against the Ambedkarites, and Mussalmans... Hindutva should be preached with vengeance among physicians and pharmacists to target SC, ST and Mussalmans with spurious medicines; to cripple with injections the new-borns of Shudras, Ati-shudras, Mussalmans and Christians...Encouragement and instigation should be carried on more vigorously so that the womenfolk of SC/ST, Mussalmans and Christians live by prostitution. During riots, the women folk of Mussalmans and Scheduled castes should be gang-raped...on the Surat model. Publications against Mussalmans, Ambedkarites, Christians and Buddhists should be accelerated. Attacks should be started with more vigour against equality, Communists, Ambedkarites, Islamic teachers, Christian missionaries...” (Ref: https://groups.google.com/g/progressive-interactions/c/GhAkqR9LfQI)

One would ask the Modi dispensation if it would whip up anti-minority hatred? Let the rulers and the ruled of this nation know for sure that India won its sacred freedom by the sweat, blood and tears of our freedom fighters and the masses. This secular, democratic nation cannot and should not be made to dance according to the whims of crass men and women who harp on their skewed nationalist ideology.

The sensible of this sacred nation will not allow the sacred Constitution to be reduced to non-entity and to be replaced by Manuvad and Hindu Dharamsamhitas.

We will demand from any government that comes to power in 2024 the following:

We would not want the nation's financial assets to be looted by anti-national elements with political connivance, or our national resources be sold out to private players. We will demand that the noble time-honoured principles of our sacred Constitution be kept and followed by legislators, judicial officers, executives and bureaucrats. We shall not be submitted to the harassment of bribe at all levels. In the name of development, Adivasis should not be displaced from their land nor the land tenancy laws be flouted. We expect that every politician be honest to the core.

Let not our leaders lie to us thinking they can hoodwink us. Let our bureaucracy and officialdom show clean character and commitment. Let not the police force think that brute force is their characteristic emblem. Let them understand that anyone suspected of an alleged crime is innocent till proved guilty, and that it is for the courts to pronounce punishment.

Let every child enjoy freedom from malnutrition. Let every child enjoy the fundamental right to education. Let our youth feel there is direction and future in their life. Let not peace be piecemeal, but wholesome. Let everyone look upon his fellow citizen as his national brother or sister. Let not colour, caste, religion, education or status divide us. Let not anyone feel left out in the enjoyment of the nation's resources under fair distribution.

Let no political or communal windbag divert our attention away from the nation's serious issues. Let no leader imagine that people have to crawl or prostrate before them in obeisance. Let not the citizens feel threatened or insecure by being forced to give up Indian citizenship and take refuge in foreign countries.

Let religion be stored for private use only, and let every citizen enjoy freedom of space, freedom of ex

And, then, we shall be proud citizens enjoying freedom and fellowship, justice -- social, political and economic; peace and prosperity.

Har ghar me joy, har dil me national pride, har kone kone me integrity! In that heaven of freedom let us hold our heads high!