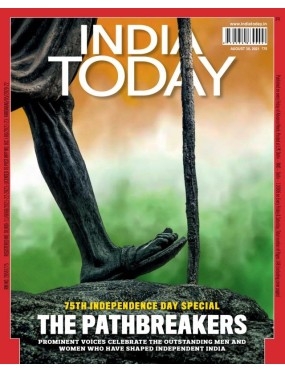 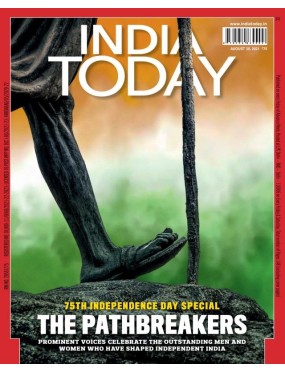 Married men are supposed to suffer from the 40 year itch when, though hitched, they start looking for greener pastures. A body continues to twitch for some time as the muscles and nerves relax. Does a nation also itch or twitch in the course of its history?

India Today magazine tried to stitch together this itch or twitch in its 75th Independence Day special, with the headline “The Pathbreakers”. I picked up this special issue hoping to find in it a barometer of the country’s growth or achievements over the last 75 (actually 74) years since Independence in 1947. Here is what I found.

Aroon Purie, the magazine’s editor-in-chief, says that there is much to be grateful for. In 1947 just 18% of the population was literate. Life expectancy was a low 32 years. Not just life, but everything else was short – like food, healthcare, institutions and industries.

Now 75% literacy has been achieved. Life expectancy has doubled; we are self-sufficient in food and are the world’s fifth largest economy. I cannot help but wonder at those pseudo desh bhakts who shamelessly parrot that previous governments did nothing for 70 years!

Purie says that the magazine has identified 115 titans who were among the Pathbreakers. Why such an arbitrary number? Had it been limited to 75 it would have made more sense. Purie blunders when he refers to this as our “diamond jubilee”! It is actually our Platinum Jubilee, as Diamond refers to sixty years. So the itch and twitch are visible.

The Pathbreakers are classified under Politics (quite predictable), Business, Science, Defence, Sports, Spirituality, Literature, the Arts, Food and Cinema. I fail to see how the last two can be categorised as Pathbreakers. Perhaps this was to glam up an otherwise staid presentation. But I felt that it only served to dilute the contributions of the real Pathbreakers.

I won’t bore you with a rundown of all the categories or titans. I have chosen a few that caught my attention or interest. Politics has 24 titans, four of whom are from the Nehru dynasty alone (thereby reinforcing their contribution to nation building), and just three women.

First on the list is Mahatma Gandhi, though dubbing him as a politician is a disservice.  Raj Chengappa quotes Albert Einstein to say “In our time of utter moral decadence, Gandhi was the only true statesman to stand for a higher human relationship in our political sphere.  Generations to come will scarcely believe that such a one as this ever in flesh and blood walked the earth”.

The Dalai Lama who came to India eight years after Gandhiji’s death, calls him “the model politician, a man who put his belief in altruism above all personal considerations and consistently maintained respect for all great spiritual traditions.  Gandhi was perhaps the greatest of our time”.

P.Chidambaram writes about former Prime Minister Manmohan Singh, who famously said that history would be kinder to him than the present generation.  Chidambaram identifies Singh’s three great achievements – attaining a growth rate of over 9% in three years, quadrupling India’s GDP in constant prices, and lifting 270 million people out of poverty.  By 2014, when he demitted office, the Indian economy was a leaping tiger says Chidambaram.

Next on my list is Narendra Modi, who Shivraj Singh Chauhan describes as “The Deliverer”. He calls him a man of ideas.  He says “I have seen him transform India into a glorious, prosperous, powerful and dignified nation by taking bold decisions such as surgical strikes against Pakistan, use of technology to end corruption, and demonetization to curb black money....There has been no one like him on India’s political firmament.”  He could have added that he held the javelin that won Neeraj a gold medal at the Olympics!

A glaring omission in the magazine’s Pathbreakers is the absence of those who actually hold the levers of power in India – the bureaucrats.  Surely there was place for people like P.N.Haskar, T.N. Sheshan and Julio Ribeiro, to name a few.

It is good that industry and business find place in the list of Pathbreakers.  There are 19 of them, including two Tatas and two Ambanis.  Azim Premji (himself India’s leading philanthropist) focuses on JRD Tata’s contribution to society.  “The India Institute of Science, the Tata Institute of Fundamental Research, the Tata Institute of Social Sciences, the National Centre for Performing  Arts and the Tata Memorial Hospital are just a few amongst the best known ones”. Inspiring  indeed !

Vikram Kirloskar describes Rahul Bajaj as the “Domestic Champ”, the one who made “Hamara Bajaj” synonymous with India.  Normally business honchos are reluctant to speak out against the government or its policies. Not so Bajaj.  Of him Kirloskar says “I learnt it was important to do the right thing, with continued emphasis on good governance and ethics, and to speak your mind confidently”.

Just one woman features in this section.  You guessed right – Kiran Mazumdar-Shaw, who T.V. Mohandas Pai describes as a “Role Model”.  Like Bajaj, “She also speaks her mind – in a constructive way – on matters of policy and social concerns.  She bonds easily, with people seeing in her a very honest, upright person devoted to the betterment of society”.

We boast of India as the mother of many world religions – Buddhism, Jainism, Hinduism and Sikhism.  Yet the magazine could identify only two spiritual leaders.  Yes, one is Mother Teresa; guess who the other one is - Bhagwan Rajneesh.  Does that surprise you?  It surprised me too.  Navin Chawla, Teresa’s biographer, unfortunately adds nothing to what we already know about the Saint of the Gutters.  He says that “she was happiest in the meaner streets or slums of the world.  In the process she had become the world’s conscience keeper”.

Ma Anand Sheela calls Osho Rajneesh “The Taboo Breaker”. She laments that “I think its a shame that some only regard him as a sex guru.  He was a man who understood sex and sexuality, yes, but what he was asking for was the world to give up its taboos”.  She adds, “Bhagwan’s teaching of love, life, laughter and acceptance – appealed to all of us who were young at the time”.

The section on defence has just two, Field Marshal Manekshaw, and General K. Sundarji.  Perhaps there could have been place for war heroes who sacrificed their lives for the nation.  In an era of rabid majoritarianism, the defence forces could have been held up as a truly secular force.  For example, how many of us know that our highest gallantry award, the Paramvir Chakra, went, among others, to those from minority communities like Col Tarapore (a Parsee), Havildar Abdul Hamid (a Muslim) and Lance Naik Albert Ekka (a tribal Christian)?

Post Tokyo 2020 we are gaga about sports, albeit in front of TV screens.  But the magazines choice of sports icons is pathetic.  Of the 8 chosen, 3 are predictably cricketers, and two “also rans”, the fourth place finishers Milkha Singh and P.T. Usha.  The legendary Dhyan Chand, after whom the country’s highest sports award has just been renamed, finds no mention.  Also missing is M.C. Marykom, our best woman sportsperson to date.

I find the category on Cinema obnoxious.  How can these Bollywood gyrators be classified as Pathbreakers for the nation?  I’d rather break by head against a wall.  There are other categories like Science & Technology with the usual suspects like Homi Baba, Vikram Sarabhai, Verghese Kurian and Abdul Kalam.

There are two from Literature, including Salman Rushdie, who doesn’t even live in India.  I’m shaking my head in disbelief.  There is a section on art, music and dance and, would you believe it – gourmet cooking.  Sadly, there was no space for Pathbreakers in the fields of education, health or the judiciary.  Environmentalists like Sundarlal Bahuguna and Medha Patkar were also missing.

While India Today has highlighted what it thought best are the titan Pathbreakers of India, I hope that they will be more judicious and all-encompassing by the time we actually get to celebrate the platinum (not diamond) jubilee of our Independence in 2022.  Till them I am not bewitched of their 75 year twitch.

•    The writer is the Convenor of the Indian Catholic Forum