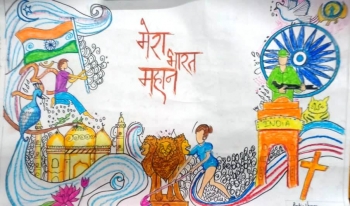 A Call to Freedom Struggle 2.0

As India gears up for celebrating its 75th Independence Day, the Prime Minister appealed to people to strengthen the ‘Har Ghar Tiranga’ movement by hoisting or displaying the national flag in their homes between August 13 and 15. He insisted saying “we recall the monumental courage and efforts of all those who dreamt of a flag for free India when we were fighting colonial rule. We reiterate our commitment to fulfill their vision and build India of their dreams.” On the other hand, the Union Home Minister reiterated that it is meant to strengthen patriotism of the countrymen. Keeping aside all the drawbacks, it is true that hoisting the national flag at my home may ‘recall all those who dreamt and shed their blood for free India and further strengthen my patriotism.’ Though the rulers have made these statements for political gain, I find a dangerous element that would bring back another freedom struggle.

Today, as a citizen of India, I celebrate the 75th Independence Day, but I fear that I am free no more. My fundamental rights like Right to Equality, Right to freedom, Right against exploitation, Right to freedom of Religion, Cultural and Educational Rights and Right to constitutional Remedies are taken away by the rulers. I pay tax for my daily food (GST); my land and minerals are sold to multinational companies; my money may lose its value (Demonetization); my citizenship is under threat (CAA, NRC);  my security is under risk (Agnipath); my education is under peril (NEP, NEET); I can’t eat what I like (beef); I can’t wear the dress I prefer (hijab); I can’t worship whom I like (hindutva); I can’t express what I feel (ED, CBI, IT); I can’t maintain my privacy (Pegasus); I can’t reside at my home (bulldoze);  I can’t pinpoint my rulers’ failures (unparliamentary words); nothing is safe in the country (No Data Available); my state government may go unstable at any time (buying MLAs); I don’t get justice from the judicial system;  bills are passed with no discussion; my country’s first citizen is used as political rubber stamp; my farmers commit suicide; employees go jobless; I don’t get government services free of cost; the bank in which I deposit money may go bankrupt;  and what else and what not… Ultimately my independent, democratic and constitutional rights and values are demolished and bulldozed by the rulers who talk about nationalism and patriotism.

Recalling the monumental courage and efforts of all those who dreamt of a flag for free India, is dangerous for the rulers today.

If the true patriotic spirit of those freedom fighters gets erupted, it will be unbearable for the present neo-colonial rule. If I ‘raise the national flag at my home and recall the dreams of the freedom fighters,’ my true patriotism should propel me to come to the streets fighting so that I may not lose my freedom once again in the hands of today’s ‘dictators’. The freedom is a gift brought about by the freedom fighters by their sacrifice and bloodshed, and it is my responsibility to hand it over to my next generation. For which, I should initiate the freedom fight 2.0 against the rulers who deny my rights and freedom. Obviously, the fear I have today in the prevailing situation was there in Dr Ambedkar too who predicted the present scenario.

After the Constitution came into existence, Dr. Ambedkar expressed his fear about losing Independence in the future. It is rather a prophetic call to be cautious about traitors and who would betray the nation. He said, “My mind is so fear of the future of our country… What would happen to her independence? Will she maintain her independence or will she lose it again? This is the first thought comes to my mind… it is the thought which makes me most anxious for the future. What perturbs me greatly is the fact that not only India has once before lost her independence, but she lost it by the infidelity and treachery of some of her own people.” He substantiated his fear with examples: “The anxiety is deepened by the realization of the fact that in addition to our old enemies in the form of castes and creeds we are going to have many political parties with diverse and opposing political creeds. Will Indians place the country above their creed or will they place creed above the country? I do not know.” He prophesied, “But this much is certain that if the parties place creed above country, our independence will be put in jeopardy a second time and probably be lost forever.”

Dr Ambedkar further said, “What would happen to her Democratic Constitution? It is not that India did not know what is democracy. This democratic system India lost. Will she lose it a second time? I do not know. But it is possible in a country like India, where democracy from its long disuse must be regarded as something quite new, there is danger of democracy giving place to dictatorship. It is quite possible for this new born democracy its form but give place to dictatorship in fact.”

Today, those who talk about patriotism have brought India to such a situation about which Dr Ambedkar feared. Every Indian citizen, on the 75th Independence Day, should undoubtedly re-read Dr. Ambedkar’s dangerous prophetic words that foreshadowed today’s Indian Constitutional and Democratic situation. There is no surprise even if one believes that India is transiting from democracy to dictatorship. Let us rejuvenate and reenergize our patriotism to come to the streets, keeping the dream of our freedom fighters at forefront, fighting for liberty, equality and fraternity.