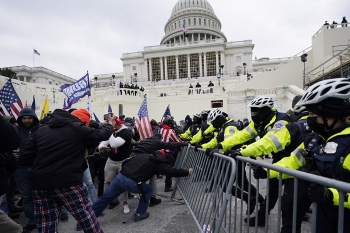 A DEATH KNELL FOR DEMOCRACY?

The ‘Storming of the Bastille’ occurred in Paris, France, on the afternoon of 14 July 1789; this   led to the French Revolution and then( which is widely accepted) to the birth of modern democracy. France, together with the United States, holds the pride of place with regard to this!

If that is so, then, the ‘Storming of the Capitol’, the seat of the US Government on the 6 January 2021 by the supporters of President Donald Trump should be regarded as a death knell for democracy.

When Trump called his supporters to Washington DC for a ‘Stop the Steal’ rally on 6 January, the day Congress would count the votes of the Electoral College, no one expected the violence and the mayhem that would take place in the world’s oldest democracy. The world watched with shock and angst. Such a terrible reality could not be happening in the United States and more so instigated by an outgoing President.

It was clear that right from the word “go” of the 3 November elections, the Joe Biden-Kamala Harris was going to win. The results first trickled in and finally the verdict was decisive. On 14 December, the Electoral College   which met across the country confirmed Biden’s triumph with 306 votes to just 232 for Trump.

He proved to be a bad loser: calling the elections a ‘fraud’ and ‘rigged’; dozens of cases were filed throughout the States – but to no avail. Each and every case was thrown out by an impartial judiciary! But Trump was just not giving up.

On 6 January, hundreds of rioters, pushing past security barriers and Capitol Police officers, breached the Capitol as both the House and Senate were meeting inside, forcing the evacuation of some lawmakers, while others barricaded themselves against the crowds. Four people died, including a woman who was shot in the Capitol building; late night on 7 January, a Capitol Police Officer died of injuries taking the tally to five; several others were also injured. The rioters also indulged in arson and vandalism!

That Trump and his family was responsible for the violence was never in doubt. A video has gone viral on social media. It shows Trump’s family and others dancing in joy, moments before the riots. The family with the President, his sons Donald Trump Junior and Eric, daughter Ivanka, besides advisor Kimberly Guilfoyle and other senior officials at the beginning of the video, can be seen watching the crowds gathered around Capitol Hill on the monitors installed in the tent. Donald Trump Junior then turns the camera on to himself and Kimberly Guilfoyle. The two can be seen urging Trump supporters to “fight” and to “do the right thing”.

The video seems to be recorded right before Donald Trump addressed the gathered crowd and urged them to “to fight! We will never give up! We will never concede!”, he said, before demanding Pence (unlawfully) reject the Electoral College results. “All Vice President Pence has to do is send it back to the states to recertify — and we become President.” He continued, “after this, we are going to walk down, and I will be there with you. We’re going to walk down to the Capitol. You’ll never take back our country with weakness, you have to show strength, and you have to be strong.”. He, however, did not walk with the crowds.

His words were enough to instigate the mob to immediately go berserk! They then scaled the walls of Capitol Hill and breached into the US Congress. This video has been criticised widely by social media users, with many calling it proof that the riots were ‘premeditated.’

That Trump called for an authoritarian putsch in front of throngs of fervid supporters, most of them right wing supremacists, including QAnon conspiracy theorists and members of the Proud Boys militia, was bad enough. But as the day went on, it got even worse.  Later, they stormed the Capitol, clashed with the police protecting it and eventually breaking into the building. Before the event, websites and social media platforms popular with MAGA types lit up with posters’ threats to start killing people after the rally if Congress refuses to make Trump president. One of them had the gumption to tell the media, “they better start worrying about the 80 million people who voted for Trump and are armed. This will be a second American revolution.”

Watching with horror, the apparent falling apart of the great American Democracy- there was universal condemnation and world leaders reacted swiftly with very strong words. Angela Merkel, the German Chancellor said Mr. Trump bore responsibility for the riot by his supporters adding, “unfortunately, President Trump did not accept his defeat since November, not even yesterday, and that has naturally created an environment that enabled such violent events.”  Her foreign minister, Heiko Maas, was even more blunt, drawing a parallel with Hitler’s power grab, “Violent actions come from inflammatory words—on the steps of the Reichstag and now in the Capitol,” he said, in reference to the burning of republican Germany’s parliament building in 1933. “Disregarding democratic institutions has devastating consequences.”

America’s next-door neighbour, Canadian Prime Minister Justin Trudeau tweeted, “the Canadians are deeply disturbed and saddened by the attack on democracy. Violence will never succeed in overruling the will of the people. Democracy in the US must be upheld—and it will be.” Whereas, a long-time Trump ally, British Prime Minister Boris Johnson,  tweeted, “Disgraceful scenes in U.S. Congress. The United States stands for democracy around the world and it is now vital that there should be a peaceful and orderly transfer of power.”   Reactions, comments, editorials from Latin America to Africa, from China to Europe; cartoons, jokes, satires, memes have been flooding the mainstream and social media; for example, ‘Iraq plans to send a peace-keeping force to the US!’ Transcending the ranks, both Republicans and Democrats, joined world leaders, vociferously condemned the “attack on democracy.” Some even demanding his immediate removal! President-elect Biden said, “Don’t dare call them protesters. They were a riotous mob. Insurrectionists. Domestic terrorists. It’s that basic. It’s that simple.”

The President of the US Catholic Bishops Conference, Archbishop Jose Gomez of Los Angeles in a statement said, “I join people of good will in condemning the violence today at the United States Capitol. This is not who we are as Americans. I am praying for members of Congress and Capitol staff and for the police and all those working to restore order and public safety. The peaceful transition of power is one of the hallmarks of this great nation. In this troubling moment, we must recommit ourselves to the values and principles of our democracy and come together as one nation under God.” Several other Bishops and other Christian leaders have also condemned this unprecedented violence. Ironically enough, many of the Christian- right have been ardent supporters of Trump. Many of them though, have proved to be downright racist and xenophobic. Today the Capitol Hill police are accused of treating the ‘white’ rioters who attacked Capitol Hill with a glove hand; whereas for insignificant misdemeanours blacks in the US are killed by white police officers.

Prime Minister Modi took to twitter saying, "distressed to see news about rioting and violence in Washington DC. Orderly and peaceful transfer of power must continue."  Hardly a condemnation!

Modi and Trump have been like two peas in a pod, doing all they can to dismantle democracy by destroying all democratic processes and institutions (fortunately in the US, the judiciary and the media have proved to be objective and non-partisan; but not so in India!).

The ‘Howdy Modi’ rally in Texas in September 2019 followed by the ‘Namaste Trump’ jamboree in Ahmedabad in February 2020, both reek of rank opportunism and artificial flattery. Modi saying in Houston, "Abki baar Trump Sarkar" certainly didn’t go down well with several, across the board and particularly with the Democratic party and their supporters. No visiting head of State/ Government visits another country and ‘campaigns’ for an incumbent or for that matter, anyone else. Every effort to cover up what the PM actually ‘meant’ by some of the godified media and the blind ‘bhakts’ are of no avail because everything is recorded. On the other hand, when Trump came to India, he did not utter a word either about the situation in Kashmir, the massive nation-wide protests for the repeal of the Citizenship Amendment Act (CAA) and for that matter, the consistent attacks on the minorities and human rights defenders!

There are unbelievable similarities between the two. In a lead article on 16 July 2020 the Washington Post said, “it took President Donald Trump 827 days to top 10,000 false and misleading claims in The Fact Checker’s database, an average of 12 claims a day. But on July 9, just 440 days later, the president crossed the 20,000 mark — an average of 23 claims a day over a 14-month period, which included the events leading up to Trump’s impeachment trial, the worldwide pandemic that crashed the economy and the eruption of protests over the death of George Floyd in police custody. The coronavirus pandemic has spawned a whole new genre of Trump’s falsehoods. The category in just a few months has reached nearly 1,000 claims, more than his tax claims combined. Trump’s false or misleading claims about the impeachment investigation — and the events surrounding it — contributed almost 1,200 entries to the database”.   Modi is also well known for his ‘fekuisms’ – whether it is in bringing back black money or providing employment; in rattling out fictitious statements on Nehru and Tagore.

For both Trump and Modi: half-truths, misleading statements and empty rhetoric help in generating populism. Besides, violence is in their DNA: we saw it happening on Capitol Hill, we see it happening in India every day. Their support for weapons, increase in defence expenditure and their total immersion with fascists, supremacists and crony capitalists are blatantly oblivious. The denigration and exclusion of minorities, migrants and refugees are deeply embedded not only in their psyche, but also in what they say and do!

America and the world have had enough of Trump and has decisively shown him the way out! But the moot question at this juncture, that given Trump’s nature, will all be well till 20 January when Biden and Harris are sworn in? Trump is still an existential threat! Hopefully, in the next few years, the tolling of the bells would turn to pealing! Now India and the world has to deal with Modi and his ilk:  no one is prepared to hear another death knell!