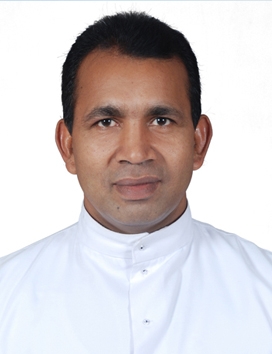 ‘A Fight for Life and Survival’

Fr. Theodacious D’Cruz is one of the core committee members of the Thiruvananthapuram archdiocesan leadership that is with the striking fishers’ community. He is a spokesperson for the protesters. He speaks to Dr. Vincent Pereppadan, SJ, on the issues involved in port construction and how it affects the fisherfolk.

Q: Why is the Latin Archdiocese of Trivandrum taking its people to protest a massive port project?

A: I am the son of a fisherman. 80% of the people of the archdiocese are fishers. The sea is our mother who provides us with our livelihood. If our mother is in danger, who will raise voice for her other than her children? Therefore, this is our struggle for protecting our mother and thereby for sustaining our lives.

Q: The port construction has progressed substantially. Why do you protest now and not before?

A: The proposed port has reached only less than one-third of its completion. We have been submitting various complaints and alerts from time to time to the government. We cautioned the authorities on the immediate consequences that we have been suffering due to the unscientific and huge construction of breakwaters. However, various governments have been pretending deaf to our cries. Now we realize that if we wait more, we and our beaches won’t be there. Therefore, this is our life and death issue.

Q: The Chief Minister says the coast erosion in Kerala is not due to the port construction but climate change. Is it not true?

A: I think the Chief Minister should be speaking for thousands of his people, land, and their protection rather than acting as Adani’s paid spokesperson. The Arabian Sea is as deep as a seven-storied building after 100 meters from the coast. The sediment transportation in the Arabian Sea is an annual phenomenon that moves the sediments up to the Middle East in the Southward wind and returns to the same coasts in the Northward wind. A three-kilometer-long groin construction for the port obstructs this centuries-old phenomenon.

Consequently, it creates immediate and drastic impacts in the thin beaches beyond the groin. We have lost seven houses in Valiathura village alone between 2015 and 2022. A wide football ground where the renowned footballer I.M. Vijayan practiced has disappeared now. Over 4000 families have become homeless, and 300 houses have been washed out in the entire area. All these are the visible and immediate consequences of the port construction.

Q: Is not the groin construction a safety wall for the coastal dwellers?

A: I am born and brought up in a fisheries village of Kannamthura. There were long and wide beaches all along the sea that naturally softened the waves at the coast. When I was a teenager, we used to have many football grounds on the beach. However, gone are the days. We have hardly a 100-meter beach. Our beaches started eroding with the erection of groins. More the groins and breakwaters more the beach erosion beyond it. Yes, apparently the groins seem to safeguard the beaches. In actuality, they are the immediate and continuous causes for beach erosion.

Q: How about the rehabilitation of the displaced?

A: There are as many as 336 families who lost their land and dwelling places in recent years due to natural and human-made calamities. The government has abandoned them into a cement storage shed temporarily. It has been seven years now. Meanwhile, some children are born in that shed. Imagine how their privacy, family life, food, hygiene, and health have been compromised. The government has not yet shown any sign of rehabilitating them elsewhere. It’s a hell-life in the shell. Some have been sheltered by their relatives.

Now, to fight our fate, we rally into the streets of the capital city in front of the Secretariat and lament that we have no shelters, and we want to survive.

Q: Is the strike against development?

A: Development slogan is a strategy against the cry of the oppressed. More than fifty thousand families are directly affected and threatened by the port construction and its impacts on the sea. An NGO called the ‘Friends of Marine’ has predicted that in a few years of time Kerala’s prime tourist destination Kovalam that has been attracting thousands of tourists from abroad would become a memory. Is there no concern for losing tourism revenue and business? The entire coastal land of Trivandrum is on the verge of a catastrophic depletion. While the Adani-funded Green Tribunal and the Indian National Centre for Ocean Information Services (INCOIS) report that there is no beach erosion, fishers’ communities are progressively becoming homeless and beachless. Still, who wants to claim that the port is a developmental project? If yes, whose development does it ensure? We demand stopping the entire port construction works and initiating a thorough scientific study by an independent team that consists of scientists and local experts from the stakeholders. And decommission the project if it is declared dangerous to people’s organic livelihood and survival.

Q: What is the next step if the government is firm in completing the project?

A: Ours is the fight for life and survival. To fail in this struggle is death for us. So, our stand is unambiguous. We will fight till we win.