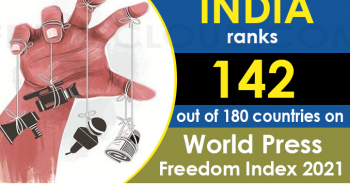 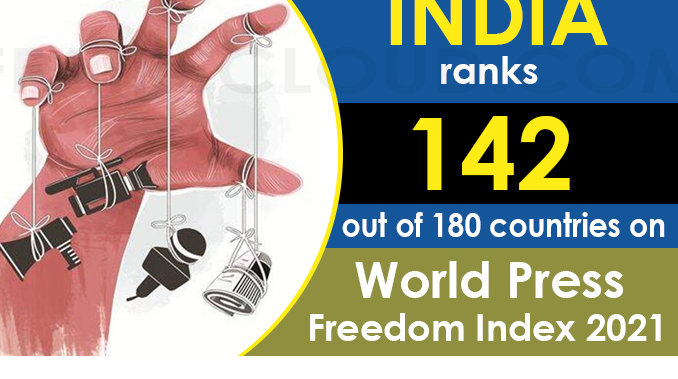 A massive exercise undertaken by an Index Monitoring Cell (IMC) created by the Modi Government to devise ways to improve the ranking of India in the World Press Freedom Index published every year by Reporters Sans Frontiers (RSF) has boomeranged. In 2020 in the World Press Freedom Index India ranked 142 among 180 nations, below Bangladesh and Sri Lanka. In 2021 in spite of efforts by the Cell the ranking remained at 142.

Titled “Modi tightens his grip on the Media”, the 2021 RSF report said, “India is one of the world’s most dangerous countries for journalists trying to do their job properly. They are exposed to every kind of attack, including police violence against reporters, ambushes by political activists, and reprisals instigated by criminal groups or corrupt local officials.

Ever since the general elections in the spring of 2019, which was won overwhelmingly by Prime Minister Narendra Modi’s Bharatiya Janata Party, pressure has increased on the media to toe the Hindu nationalist government’s line. The coordinated hate campaigns waged on social networks against journalists who dare to speak or write about subjects that annoy Hindutva followers are terrifying and include calls for the concerned journalists to be murdered, the report added.

The campaigns are particularly violent when the targets are women. Criminal prosecutions are often used to gag journalists critical of the authorities with some prosecutors invoking Section 124 (a) of the penal code under which ‘sedition’ is punishable by life imprisonment, the report added. The RSF website also carried four India related reports on attacks on the media including the arbitrary raids on the news website NewsClick.

The 13-member cell consisted of mainly of bureaucrats from the Information and Broadcasting Ministry, the Press Information Bureau, the Niti Ayog, Indian Institute of Mass Communication, the Press Council of India, Registrar of Newspapers of India and the External Publicity Division, Ministry of External Affairs. Renowned journalists P. Sainath and Rajat Sharma of India T.V. were also included in the Committee. Even before the cell made its draft report, Rajat Sharma left it citing other pressing engagements.

Ironically, a note of dissent prepared by P. Sainath has brought its activities to full stop. He countered every argument the bureaucrats have made about the state of the Indian media. At the outset, Sainath’s note has pointed out, “A fair and honest ranking would see India plumbing depths below rank 142.”

The Prime Minister had in March 2020 declared media as an essential service but the attacks on journalists, arrests on false charges, abuse of legal provisions to harass journalists, and attacks by vigilante groups had all increased since then, the dissent note pointed out. The note has called for a law for police accountability to ensure punishment of those who register false cases against innocent persons.

On the draft of the IMC report, the dissent note says that there is no description, no recounting or measuring of the situation on the ground in relation to press freedom and there is no mention of accountability of the state.

A committee or Cell convened on the issue of press freedom cannot function in silence or secrecy. We have to be upfront and state plainly about the situation as it exists. If we censor ourselves, imagine what that says about the state of freedom in the larger media canvas of the country, the note pointed out.

Commenting on the use of the Epidemic Diseases Act against Andrew Sam Raja Pandian, founder of the news portal SimpliCity in Tamil Nadu, the note said this “appears to be the only time ever in independent India’s history that a journalist has ever been booked under this law. …. The British used sections of the Act to prosecute Bal Gangadhar Tilak.”

Commenting on the internet shutdown in Kashmir the note said, “They are very grave violations with severe consequences in social, economic, political and human rights spheres. Also they are a very feudal form of collective punishment, punishing an entire region once state, for things claimed to be doings of a handful of foreign-bred terrorists.”

On the arrest of stand-up comedian Munawar Farooqi, the note said: “So now you can be jailed for your thoughts. You can even be jailed for what the police or other authorities claim were your thoughts, regardless of whether those claims were bunkum.” Sainath also said that the Cell should have called for strengthening of the Press Council of India, creation of a Media Council and appointment of a Press Commission.

To assess the real situation of the media in India, the IMC conducted a survey of 18 journalists in India, 10 foreign and 8 Indians. The selection of the sample for the survey, in fact, takes the cake. All the 18 respondents were participants in the four-month diploma course conducted by the Indian Institute of Mass Communication.

The survey concluded that “IN INDIA COMPLETE FREEDOM OF MEDIA EXISTS!”