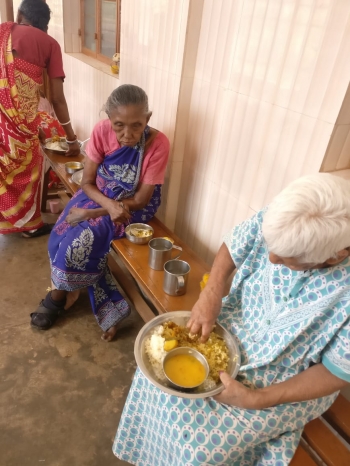 “It’s not about how much you do, but how much love you put into what you do that counts.” -- St. Teresa of Calcutta.

Leprosy was renamed Hansen’s disease after Norweign scientist Gethard Henrik Armauer Hansen who in 1873 discovered the slow growing bacterium now known as Macroacterium leprae as the cause of the illness. World Leprosy Day is observed on the last Sunday of January each year.

Established in 1954 by French philanthropist Raoul Follereau, it aims to raise awareness about leprosy and teach people about this disease that is easily curable today. Many people around the world continue to suffer from this curable disease due to lack of access to basic medical care and continued stigma surrounding the illness. Over several centuries, leprosy had remained a dreaded, incurable disease. Patients were viewed with abhorrence, ostracized and subjected to inhuman treatment.

Most of the ordinary people like me have completely forgotten about this disease believing what WHO and Indian government had declared in 2005. Moreover, we seldom see any leprosy patient limping around begging with crippled fingers and toes, as it used to be frequently seen before the year 2000. It was a surprise to me seeing more than hundred leprosy patients being treated and looked after under the same roof. That is at Missionaries of Charity Leprosy Rehabilitation Centre, Radharani, Ranchi, Jharkhand where we had gone to spend our Diwali holidays.

It was an eye opener for us when we talked to the inmates and the Rev. Sisters that despite the efforts of the government and WHO, 120,000 to 130,000 new cases of leprosy are reported every year in India. The inmates admitted that free medicines are distributed in Government hospitals but those medicines can only give a temporary relief. Early detection of the disease and continuous medicine from the initial stage till it is completely uprooted, can only give a permanent relief to the patients. Most of the cases go undetected, due to lack of proper awareness about the exact symptoms of leprosy. It can take many years to develop symptoms of the disease following an infection. However, people who catch the disease can easily be cured with antibiotics.

The affected people, their family members and the local quacks that they consult initially mistake it for some skin allergy and begin treatment for the same. When the external symptoms disappear, they stop the medicines. Only when it aggravates, they approach qualified and specialised government doctors. Even after the proper diagnosis and the initiation of the medicines most of the patients discontinue the treatment once they get some relief. But effective treatments of severely affected leprosy patients, proper awareness and personal care and their rehabilitation are rare to find.

Missionaries of Charity (MC) founded by St. Therese of Calcutta is doing yeomen services for such people. At present around 100 leprosy patients are being treated by the Sisters at Radharani alone. There is another similar centre at Seemapuri in Delhi which I had visited many times, where too hundreds of leprosy patients and cured but rehabilitated people are looked after by the MC Sisters.  There are many more such centres all over the country by the MC Congregation.

There are a few children, teenagers and youth too among them affected by leprosy and are being treated here.  I closely observed how the sisters and some trained ladies clean and dress their wounds on every alternate day. Chronic tropical ulcers caused by leprosy, if left untreated, may lead to the loss of limbs and amputation. Leprosy ulcers do not readily heal, especially in a tropical climate, even when leprosy infection has been treated. Untreated ulcers may also be the cause of leprosy stigma. Missionaries of Charity sisters may spend a lifetime cleaning and dressing ulcers caused by leprosy. For ordinary people like us it is difficult to look at it for long. My wife had to take her eyes away after a glance.

Another 60 cured but abandoned persons are rehabilitated with shelter, food and clothing and a small salary in lieu of some odd jobs they can do on the campus. Even after completely getting cured, the deformity of limps and face leave them ‘unequals’ in the society.

The social stigma is another reason for their family members refusing to accept them back and hence they prefer to remain here and the Sisters don’t send them away.

Mr. Pandit Baaba (name changed), from Odisha, came there for treatment 27 years back. Though he is cured and does not have any deformity, no girl was ready to marry him when he went back to his native place as he was once affected by this scary disease which is believed to be contagious. His family too didn’t welcome him back. No one employed him too for any work. So, having no other option, he returned and still remains in this centre, helping sisters in gardening and farming. He is now 91 years old and hence doesn’t have to work but is looked after well. Even after living with Christian nuns for long years, he is still a Hindu Brahmin and pure vegetarian. He was never forced to convert to Christianity as Government agencies and some political parties allege. Though there is a big church inside the 6-acre centre, Hindu and Muslim patients or ex-patients are never encouraged to attend any prayer service there. He is one among the 60 rehabilitated cured patients. Most of them I talked had similar stories to narrate.

It was our first experience of seeing silk worm farming for weaving clothes in which some of the rehabilitated ex-patients are engaged in. They weave bed sheets and dhotis for themselves. Farming of rice, seasonal vegetable and fruit trees, coconut palms and even pepper creepers are some of the works the others are engaged in. They follow a daily time table. Whatever is produced here is used for their own consumption. They are given stomach full nutritious food three times every day.

Missionaries of Charity may be the only congregation, at least in my knowledge, which does not have any profit-making institutions, like schools, colleges or hospitals. All their ventures are purely for charity and managed with the donations received from generous people. They are struggling to manage the affairs of the centres. Thousands of helpless, orphaned, sick, mentally and physically challenged, and abandoned people under their care will be in trouble once their benefactors stop helping them. Let’s hope that God’s providence may keep them going.  ‘Effective, compassionate, Christian care is hard to beat.’

Although elimination of leprosy has been achieved to a great extend in India, occurrence of new cases in some states is a matter of concern. Constant vigilance is required to see that the disease does not reappear in the community. It is seen that initially the Annual New Case Detection Rate (ANCDR) showed a significant fall. However, subsequent to 2005, it has more or less remained at the same level. This is a warning sign, and an indication that there should be an active thrust to identify new cases. It is important to identify any hidden infective source cases, trace and treat. A national sample survey was recently carried out to find out any difference in the known and actual cases (Katoch K, 2011, personal communication). Such surveys should be repeated.

Integration of leprosy into the general health service has greatly enhanced the scope of leprosy service. By integration, discrimination against leprosy has been removed and the patients have access to the services of ophthalmologists, surgeons, physiotherapists, and general physicians.

The most important step in eradication of any communicable disease is to knock out the last case. This can be achieved essentially by community participation. Vigorous public awareness campaign should continue as the government has done for Covid 19 awareness, through mobile ringtone, All India Radio, Door Darshan, Newspapers, other TV Channels, Educational institutions etc.  It is only the enlightened public that can provide the solution to any social or public health problem.

With all the remarkable achievements in the fight against leprosy, the stage is now set for the final assault. The disease should be eradicated in the near future. The health authorities are highly capable and are fully armed, with political will that has sustained the NLEP all these years, India could well be leprosy-free in a few years’ time.