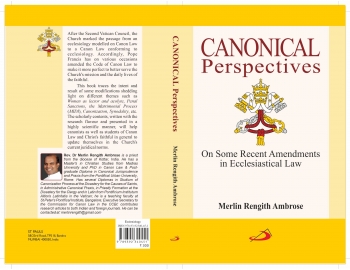 A Look at Laws of the Church

“Canonical Perspectives on Some Recent Amendments in Ecclesiastical Law” by Rev. Dr. Merlin Rengith Ambrose echoes the canonists of the Middle Ages who were the most innovative and creative in the Church of the period; they were ahead of their times both in the Church and in the world. Reflecting contextually and beyond the boundaries of the Church, they sowed the seeds for the modern human rights regime and democracy.

The eight canonical thematics the author has chosen to delve into are significant and pastorally relevant. They are so actual that the readers are bound to vibrate with them. It is about forty years now since the present code was promulgated (1983), and the fast-changing times and the conditions of the Church and the world have triggered a much-needed reform of it.  Pope Francis has dared to bring changes with the pastoral situation of the present times in mind, and the innovations introduced are a prelude to a complete overhaul of the current code, and hopefully promulgation of a new one.

The book starts with the much-debated issue of the participation of women in the life and ministry of the Church. The author deals with the reform, instituting women officially as ministers of lector and acolyte, which was reserved only for male members, thus introducing change in the existing Canon 230. It may not be an earth-shaking reform. Nevertheless, it is very symbolic and hopefully a prelude for more radical changes in the ministerial role of women in the future.

On the other hand, women were actually involved in these ministries. In this case, it is a confirmation of the approval of practice in the spirit of the sense of the faithful – sensus fidelium. The second chapter reflects on the synodal path introduced by Pope Francis based on a solid ecclesiology of the People of God, and the author throws light on this connection in Canons 342-348.

On May 23, 2021, Pope Francis introduced significant changes in the penal norms in the Church and thus reforming Book VI of the code. This was done with the pastoral goals of healing and correction in the Church and removing any traces of the spirit of revenge and retribution. This is the focus of the reflection of the author in chapter three.

Recently we all witnessed the canonization of the martyr St. Devasahayam. It is the auspicious occasion to learn in the fourth chapter of the book about how through the two millennia of Christian history, the process of recognizing and declaring saints developed and understand the various stages involved.

Of late, clerics forming Trusts and engaging in profit-making business activities are widely discussed in the country. In the fifth chapter, the author provides an exegesis of the pertinent Can.  286 and reflects on its nuances and implications.

A painful everyday issue that several Christian faithful encounters is the nullity for which they apply to the ecclesial authorities. The last three chapters go into the various aspects of this question. As the author tells us in the sixth chapter, the declaration of the nullity of marriage is not annulling the marriage bond but rather the declaration of a marriage that was invalid and non-existent right from the beginning, based on invalidating reasons.

The author explains the five different phases in the process of marriage nullity, which would be very helpful to those perplexed by the laws of the Church on marriage and divorce. It also enlightens on the rights the faithful enjoy before the competent ecclesiastical forum.

The author throws much light on these rights in chapters seven and eight. It delves into the significance of proof in the instructional phase (chapter seven) and the publication of the acts (chapter eight).

This book is the fruit of much study and research, as the numerous references testify. It is not a heavy and frightening work on Canon Law. Written in a lucid style and accessible to a broader readership, Dr. Merlin Rengith Ambrose, Professor of Canon Law at St. Peter’s Pontifical Institute & Executive Secretary of CCBI Commission for Canon Law, brings to our doorsteps the laws and norms of the Church, evoking our interest and making dialogue with them possible. The book is pastorally relevant and practical that it is likely to see many editions. I am sure many Christian faithful will benefit by reading this excellent and timely book.

The book is published by St Paul’s Publication, Mumbai, and is priced at Rs. 300.