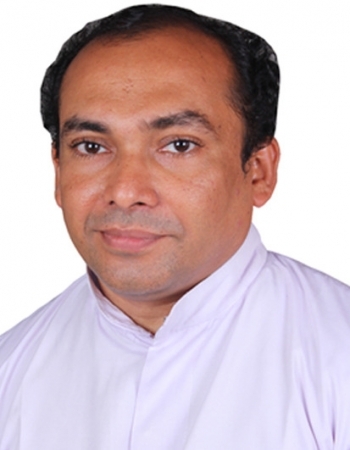 A New Lease of Life for Them 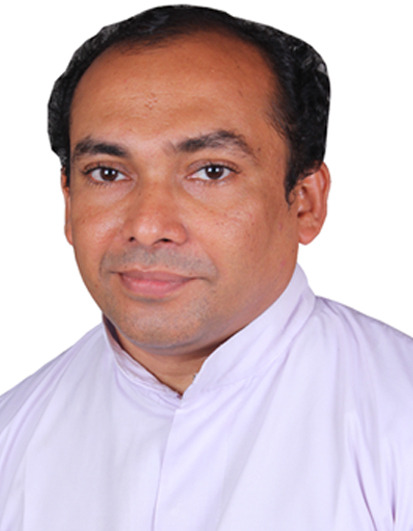 The inspiration to initiate a movement to support persons with disabilities emerged from the life experience of Fr. Kadambat. After five years of his ordination while he was working as the manager of a school in Madhya Pradesh, he faced the problem of blurred vision. When the doctors of a Hyderabad-based eye hospital told him that he was seventy five percent blind, he was shocked. In his own words, “I became completely desperate; in spite of being a religious priest I felt that life has no meaning for me and I foresaw death in front of me”.

In that desperate situation Fr. Solomon was sent to Amala Cancer Hospital, Thrissur, Kerala to function as a spiritual animator. His encounter with a lady suffering from brain tumour was a turning point in his life. While visiting the patients, he heard the loud cry of a woman in the palliative care unit and went to see her.  He saw her struggling with acute pain, but she was not desperate. That scene raised a question in him, “compared to her my situation is far better; although I am losing my vision, I am in a better position than her because I don’t suffer from acute pain. Except for eye-problem, all my organs are functioning well. Why should I be disappointed?” He decided to focus on counselling patients and imparting them solace and comfort. Life became meaningful for him. Simultaneously empathy and concern for persons with disabilities became strong within him.

One day, a small group of visually impaired young people approached Fr. Solomon with a request to start a cricket team for the visually impaired persons in Thrissur district. “Many districts in Kerala have cricket teams of visually impaired persons, but Thrissur doesn’t have one”, they told Fr. Solomon. In order to form a team, they were in need of a place to come together and train the members; they also needed a name. Fr. Solomon did not have any experience in guiding a cricket team, but he had the good will to support the young people. He approached the then principal of Devamatha Public School, Thrissur to get a place. Fr. Edamana the principal of the school, who had a soft corner for persons with disabilities, encouraged and supported Fr. Solomon by providing the facilities in the school. He also suggested making use of the name Darshana for starting a club. Thus, Darshana club came into existence in 2017.

When persons with other types of disabilities came to know about Darshana Club they also approached Fr. Solomon for forming teams and organizing training for basketball, football and swimming. Thus, came into existence the Darshan Wheelchair Basketball Team, Dharsana Football Team, Darshana Cricket Team, Darshana Chess Team and Darshana Swimming Training. The activities of Darshana club were gradually extended to other areas like forming Darshana Orchestra Group, Darshana Shinkari Melam and training and assistance for self-employment. Organizing get-togethers of persons with disabilities, both offline and online, was another important activity that was found to be very motivating for the differently abled persons.

According to Fr. Solomon, various activities started under the aegis of Darshana Club were not planned, but they evolved as a result of responding positively to the aspirations of differently abled persons. It was a kind of evolution during the last five years. According to him, differently abled persons supported by Darshana Club can be broadly classified into four groups: Visually Impaired, Hearing and Speech Impaired, Persons who have difficulty to move and Persons suffering from autism. Fr. Solomon has admitted that except for organizing annual get-togethers and occasional online meetings for people suffering from autism, Darshana Club has not been able to do much for them.

As a response to the question, “what changes have taken place in the differently abled persons?” Fr. Solomon said that the most important change is a positive attitude towards life. A good number of them no longer consider themselves as a burden on their families or the society. They have the confidence that they can make a change in their lives as well as in society.  Because of taking part in different training programmes and competitions, the self- confidence of many increased to a great extent. Involvement in different activities, especially self-employment, made many of them fully occupied. They are also getting recognition from society. For example, eight physically challenged women, who are the members of Darshana Wheelchair BasketBall team, took part recently in the South Zone inter-state state Wheel Chair basketball competition and won the third prize.  After their victory they were given public reception in their respective Gram Panchayats. It was a great morale boosting to all of them.

The activities initiated so far can be categorized as the following. 1) Training and financial support for self-employment and providing marketing facilities for the products prepared by differently abled persons. 2) Financial support for purchase of medicines and education of children with disabilities. 3) Coaching in different kinds of sports and games and supporting the teams for taking part in competitions at different levels. 4) Organizing online and offline motivational programmes and get-togethers for groups of differently abled persons. 5) Helping the differently abled persons to access government schemes and benefits and 6) Networking with government departments and other organizations dedicated to the development of persons with disabilities.

Regarding the source of finance for various activities, Fr. Solomon said that most of the activities are sponsored by people of good will. For example, the wheelchairs for Wheelchair Basketball team were sponsored by different individuals. Each wheelchair costs about Rs. 30,000. In the same way, individuals, organizations and business groups provide financial support for coaching the differently abled persons in sports and games. Darshana Club is also networking with other organizations for organizing different programmes for the differently abled.

With the expansion of activities of Darshana Club it has become necessary to provide a legal basis to it. Hence Darshana Service Society (DSS) was registered in February 2022 and all activities of Darshana Club are brought under DSS. Representatives of persons with disability and individuals committed to the holistic development of differently abled persons are the members of DSS. The membership of DSS is open to all irrespective of caste, religion, status etc. Darshana Service Society is supported by CMI St. Paul Province Bhopal, as the initiative taken by Fr. Solomon is in tune with the priorities of the province.

With regard to the future plans, the desire of Fr. Solomon is to have a place where training for the differently abled persons could be organized. Currently facilities of various institutions like ground, swimming pool, halls, etc. are being made use by Darshana Service Society. Besides the facilities provided by different institutions, a place where different types of residential training and skill training for the differently abled persons could be held, is an important need. So far Darshana Club/Society has been totally depending on the generous support of people and Fr. Solomon wants to continue this dependence on people so that the initiative he launched five years ago would continue as a people’s movement.