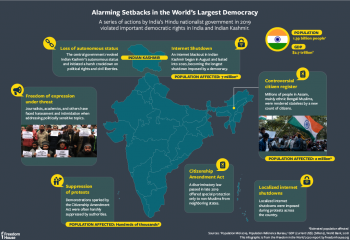 Too often we hear the cliché:  Although India became independent from the British rule, millions of Indians are still not free, because they are very poor, economically and socially. And no one from any political party gets provoked by such utterances. So, why should we be worried if somebody has rated us ‘partly free’?

We need not be; but it is good to ponder why we have fallen from the ‘free’ to the ‘partly free’ category, in the ratings of Freedom House (FH).

What is Freedom House?  It is a non-profit organization incorporated on 31st October 1941 and headquartered in Washington DC with field offices in a dozen countries.   Among the founders were Eleanor Roosevelt (with the quiet encouragement of President Franklin D. Roosevelt) and personalities like Samuel Huntington, the famous American Political Scientist. The organization’s leadership was convinced that the spread of democracy would be the best safeguard against totalitarian ideologies.

Currently, the organization describes itself as a clear voice for democracy and freedom around the world.  In this endeavour, its annual publications like ‘Freedom in the World’ and ‘Press Freedom Survey’, which started coming out since 1972, are very much sought after.  These reports are brought out by the expertise of some 125 Analysts and 40 Consultants, through a very comprehensive process.  The fact that a major part of FH’s budget is financed by the US Government is indicative of the importance the US attaches to democratic values.

According to the Times of India, similar downgrading in the ratings on India’s individual freedom and press freedom had taken place during the 1975 Emergency – refer to its editorial “Junk Sedition” on 5/3/21. That should console the Ministry of External Affairs which has brushed aside the FH report as usual ‘sermons’ which India does not need!  After all, other certificates from monitors and watchdogs, especially from abroad, are celebrated. For example, the trumpeting of QS World University Rankings 2021, in which 25 Courses offered by Indian Universities have figured in the top 100 globally, and of the World Bank’s report on India’s moving up 14 points in the ease of doing business in 2020 are worth citing. Further, as Mr P. Chidambaram points out in his article “Courts sound the bell for liberty” (Indian Express 28/2/21), “during the Emergency (1975-77), the target was political opposition.  Now the target is every voice of dissent – be it political, social, cultural, artistic, or academic”.

In the Human Freedom Index, India is at 111 out of 162 countries and in the World Press Freedom Index, India ranks 142 out of 180 countries.  Freedoms in India have diminished, resulting in the slip from a score of 71 in 2020 to 67 in 2021, the scores for the earlier three years being 77 in 2017 and 2018 and 75 in 2019.  In the process, India, for the first time in many years, has slipped from the “Free” to the “Partly Free” category.  We can derive some satisfaction that we are at the top of that category.  The parameters followed for these ratings remind me of the marks I used to get for different subjects during my high school days!  As explained by Shekhar Gupta, the well-known journalist, in his YouTube talk, under the heading ‘Political Rights’ India gets a score of 34 out of 40 and for ‘Civil Liberties’ 33 out of 60, making up the score of 67 out of 100.

Going further into the details, Shekhar explains that assessment is done under seven broad areas, namely, Electoral Process, Political Pluralism and Participation, Functioning of the Government, Freedom of ex

Under ‘Functioning of the Government’, India gets the same medium level score of 9 out of 16.  Facts which brought the score down are (a) there are not sufficient safeguards against official corruption, (b) dilution of the Right to Information Act, absence of Information Commissioners at Central and at the level of several States. India fares poorly under ‘Associational and Organizational Rights’, getting only 7 out 12, due to shutting down the internet in states like Kashmir, closing down of the office of Amnesty International, the world-famous watchdog of human rights, tightening of Foreign Contributions Regulation Act etc.

Similarly, academic freedom has been severely curtailed due to the unwarranted government interference as in the case of JNU.  Under the ‘Rule of Law’, India’s score is only 8 out of 16, primarily due to the unsatisfactory answer to the question “Does India have an independent Judiciary”, adversely affected by the instances of the retired Chief Justice Ranjan Gogoi being nominated to the Rajya Sabha, apparently as a reward for his Ayodhya verdict and the overnight transfer of Justice Muralidhar (name not mentioned by FH) from Delhi to Haryana to prevent him from adjudicating on a case relating to north-east Delhi riots, which would have gone against certain BJP leaders.  There is a justifiable perception that several verdicts in the High Courts and Supreme Court tended to favour the Government. Also, granting of bail in several instances was inordinately delayed to the staunch opposition of the police.  It is a clear message to the Courts that they are being watched not only within India but also outside.

Under the ‘Personal Autonomy’ area, our score is only 9 out of 16.  Although we get 3 out of 4 for ‘freedom to own property’, on other issues of personal autonomy like freedom of movement, family planning and equal opportunity, the scores are only 2 out of 4 each. Incidents like the sudden movement of the migrant labour, they being forced to walk, the very fact that they cannot eke out their livelihood in their own home states due to non-availability of work or get only low wages due to no/poor implementation of Minimum Wages Act etc., are factors which adversely affected the scores in these areas.

How do we fare in comparison with other countries? Pakistan, gets a miserable score of 37 only!  Russia gets only 20 out of 100 and China 9 out of 100. Sri Lanka and Nepal get 56 each. Kashmir, administered by India, gets only 27 and Pakistan-occupied Kashmir gets 28, a fact we can use to taunt Pakistan.  Israel gets 76, while Canada, the UK and the US get 98, 92 and 83 respectively.

Which are the factors that stand out as having pulled down our ratings? I would say tightening of FCRA, leading to curtailment of freedom for NGOs, impediments in the freedom of movement following the sudden and harsh lock-down, lack of independence of the judiciary and above all overuse of sedition law leading to the arrests and imprisonment of several individuals like climate activist Disha Ravi, journalist Siddique Kappan, labour rights activists like Nodeep Kaur and Shiv Kumar, comedian Munawar Faruqui (for a joke he never uttered!) etc. have adversely affected the ‘freedom rating’. No wonder the Times of India concludes its above-quoted editorial thus: “It is time the Supreme Court treated patently unjustified sedition cases as contempt of its judgements narrowing the applicability of sedition. The chilling effect from frequent political witch hunts is contributing to India’s international embarrassment too”.

(Peter Mundackal is a Development Consultant and can be reached at petermundackal@yahoo.com)