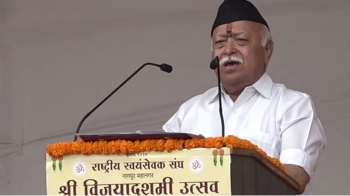 A Reality, not a Spectre

In an op-ed piece in The Indian Express last week titled ‘The Spectre Peddlers”, the RSS ideologue, Ram Madhav, has lashed out at the constant misinformation and lies being spread by “Pakistan-sponsored and Khalistan-inspired groups” to the global audience about minorities in this country facing persecution, discrimination and deadly mob violence, about a partisan judiciary and law and order machinery. He blames the Opposition for seeking to lend credibility to this false narrative.  His jaundiced eye sees the occasional cases of lynching as victimizing both Hindus and Muslims. He makes the outrageous and misleading claim that “the criminal justice system, the law-and-order machinery is controlled by the governments of the Indian states.” His assessment is that all is fine for the minorities in India.

I have a different tale to tell. My story is about inhumanity, contempt, bigotry and unspeakable cruelty. It is about the deliberate, organized and hate-filled othering of the Muslim that is now a plague. After the general elections in 2019, a leading political psychologist had observed that the electoral results indicated that Savarkar’s Hindutva worldview had taken root in the psyche of a large section of people and the Gujarat model of hate had spread all over the country. In the three years since then, it has only got worse.

For starters, allow me to give you a snapshot of a day in the life of a Muslim in present-day India. A few days ago, the world witnessed our version of medieval street justice. In Undhela village of Gujarat, 10 Muslim young men who had been arrested for allegedly disrupting a garba function by stone-throwing were, by turns, pinned to an electric pole and flogged with lathis by police in plainclothes in front of an applauding crowd, before being bundled into a police van for the legal process to begin. One was reminded of criminals and Christians being thrown to the lions at the Colosseum even as the spectators roared in delight.

Around the same time, several Muslim youths were arrested in Indore, allegedly for entering venues where Garba was being performed as part of the festivities to celebrate Navratri. Traditionally, the Garba function embraced everybody, and if one goes by what one of the organizers of Garba told a leading TV channel, this dance event honoring females and celebrating fertility was open to everybody, irrespective of religious affiliation. But this time around, Muslims are being identified and assaulted by Bajrang Dal vigilantes and then handed over to the police. Madhya Pradesh’s Culture Minister fanned the flames with her preposterous observation that Garba pandals are “becoming the medium of love-jihad.”

In Gumla district of Jharkhand, a 22-year-old Muslim was hacked to death by a mob with axes, sticks and rods. A Dussehra crowd in Bidar district of Karnataka barged into the Mahmud Gawan Madrasa, which is a heritage site, and in a defiant act of desecration, performed puja within its precincts.

In what has now become a routine happening, the Gujarat government has been on a devastating demolition drive for almost a week on Bet Dwarka island of Gujarat. Bulldozers accompanied by 1000 security personnel have been razing to the ground allegedly illegal structures that include residential, commercial and religious spaces. Summoning the Manichean imagery of good versus evil, the ruling BJP has released a video identifying the encroachers as kattarpanthis and deshvirodhi, adding that “the land of Lord Krishna has been rid of anti-national organizations and extremists.” No marks for guessing who the extremists are and whose structures have been demolished. For a Muslim the most frightening aspect is not the naked communalizing of the demolition drive by the BJP, but the muted response of the AAP and the Congress to such venomous social divisiveness.  Caught between the flagrant hostility of the right-wing and the sham concern of the secular front, Muslims are India’s outcastes.

We are now a society bereft of a social conscience or insaaniyat. The impunity with which extrajudicial punishments are being meted out to Muslims should worry a nation that has become, to use our leading social commentator’s ex

The proverbial icing on the cake for the Hindutva brigade in this festive season was the RSS chief Mohan Bhagwat’s Vijayadashami speech at an RSS rally in Nagpur, where he expressed his apprehensions about the “population imbalance” which he attributed mainly to conversion by force, allurement and infiltration from across the border. He asserted the RSS worldview quite bluntly: “Without opposing anybody, Sangh organizes all who subscribe to this thought (of Hindu sanghatan or Hindu nation) i.e., organizes the Hindu society for protecting the Hindu dharma, sanskriti, samaj and all-round development of the Hindu Rashtra.” It was a clear, unambiguous enunciation of the Hindutva doctrine of Hindu homogeneity through exclusion.

In reiterating the core philosophy of the RSS, the Sarsanghchalak was also cocking a snook at the five “eminent Muslim intellectuals” who came away from the meeting with him a few weeks ago, sanguinely believing that he was swayed by their arguments that it was impossible for India’s Muslim population to outgrow and dominate Hindus. Confronted by the media about Mohan Bhagwat’s latest statement on the “population imbalance”, one of the five wise Muslim men responded that Bhagwat’s remarks on population policy were ‘balanced’ as he did not point fingers at any particular community. Who then did Bhagwat have in mind for the population imbalance due to conversion and infiltration? The sheer disingenuousness is stunning!

In this traumatic time for Muslims, a leading Muslim public intellectual, in regular columns in the India Express, has been effusive about the RSS chief’s initiative in bringing about perestroika in Hindutva thinking. As proof of the RSS chief’s eclectic intentions, he alludes to Bhagwat’s recent visit to a mosque and interaction with Madrasa students. He, however, omits to mention that the RSS chief had broached the subject of teaching of the Gita and learning Hindi for uniting the country, which was his covert way of propagating the one nation, one language, one culture doctrine of Hindutva. The credulous admirer even endorses Bhagwat’s ahistorical suggestion that the Hindu-Muslim divide was sown by the British although Hindu-Muslim riots and dissensions date back to centuries before the British set foot in India.

What is the way out for a community which is up against the wall? Certainly not the fawning obeisance of Muslim intellectuals before the superior and intimidating might of Hindutva. In the context of the Palestinian problem, Edward Said had observed that only a peaceful, mass political movement has a chance of succeeding in the fight against oppression. One couldn’t agree more!