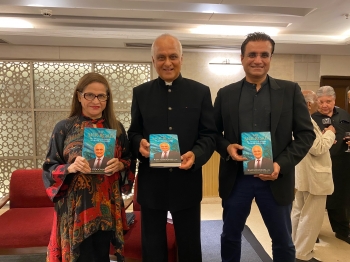 A ‘Shameless’ Fund Raiser for the Poor

Ram Gidoomal lives in the hearts of the people, be it the marginalized, leprosy affected, bonded labour, downtrodden or the oppressed. He has been instrumental in raising funds for them through large corporates and other business tycoons. He has been on the Boards of The Leprosy Mission, International Justice Mission, and several other agencies raising funds to address these issues.

During his run for the position of London Mayor, his punch line was, “If I’m elected, I will work for the homeless, the jobless, and the carless”. The manifesto focused on the principles of social Justice, respect for life, reconciliation, active compassion, stewardship of resources and empowerment.

He was in India recently to release his book “My Silk Road”. According to John Samuel, IAS, “Ram Gidoomal is known worldwide for his Character, Compassion and Commitment.” On behalf of Indian Currents, Manoj Varghese had an opportunity to interview Ram Gidoomal and know the backroom story of the book and the author.

Q: How did you run into a business empire from a corner shop in London?

A: My grandparents had a well-established silk business in the early 19th century and owned the Moti Mahal in Hyderabad. But first we were refugees during the Partition of India, leaving the Sindh for Kenya, and then we had a second flight due to ethnic violence in Africa, which brought us to the streets of London. In Kenya, we lived in a 15-bedroom flat and led a luxurious life. But, in London, we had to open a corner shop in order to try to eat at least two square meals a day. We made it a point to work hard. I remember opening the shop as early as at 4 in the morning and closing late midnight, while the other shops opened only by 8 a.m.

We identified what local people wanted, whether Spanish newspapers or Irish cigarettes, and made it a point to meet their needs. In a short span of time, we expanded our business to another five more corner shops. Later, I worked in Lloyds Bank International, before being recruited to Inlaks, which was founded by my wife’s uncle, Indoo Shivdasani. We Sindhis know how to do our business. In fact, it is in our blood. We were known for ‘Idhar ka maal udhar, aur udhar ka maal idhar’ (trading goods from once place to another).

At the age of 37, I was the CEO of Inlaks UK, and retired at the age of 40 to start up and run a series of entrepreneurial initiatives in the business sector, in the social enterprise sector and in the charitable sector.

Q: What inspired you to write this Memoir/Book ‘My Silk Road”?

A: The covid times created the ambience, and the family provoked me to document my life journey. My friend-cum-publisher Prabhu Guptara accelerated it by setting a deadline to get it published along with the ‘Azadi ka Amrit Mahotsav’ in India. During the corona times, my extended family got together online to celebrate my 70th birthday. The small clippings shared online by them made me to work on the content part and set the historical records right. My grandchildren had collated facts from several people and every corner of the earth. The tight deadline made me to think, recollect and scribble as much information as I could in a short span of time. I dedicate this book to the most vulnerable children in India and wish a ‘silk road’ for each of them.

Q: What created a spark in your life to advocate for the marginalized?

A: On a business trip to India to procure large quantity of seafoods for trading purpose, I had an opportunity to visit Dharavi in Mumbai in 1987. I smelt and touched poverty for the first time and saw the slum areas with my own eyes. I could not sleep in peace, the question boomeranged in my mind: what I am doing on this earth. I was moved to help them out. On my way back home in London, I thought of raising funds for such deprived groups of people. We introduced the concept of ‘Eat less Pay More’ Restaurants on the high streets of the UK where the food was priced high to raise money for India. When it comes to raise funds for a noble cause, I am shameless and ruthless.

Q: Tell me something about the ‘Christmas Crackers’.

A: The Dharavi experience inspired me and three other friends to set up the Christmas Cracker Charitable Trust with a novel approach of raising money for charity and invest it in the developing countries. Christmas crackers are festive table decorations that make a snapping sound when pulled open, and often contain a small gift, a paper hat, and a joke. We aimed at creating a business run by teenage volunteers, which would donate its profits to relief projects. The youth groups marketed their food, with slogans like 'eat less, pay more', 'bite for right', and 'justice not just us'. Over seven years, Christmas Cracker project raised US $10 million for charity, mobilising over 50,000 youth in the process. This campaign was a huge success.

Q: What has been the biggest change in your life?

A: As a student relatively new to England, and with no friends at university, out of loneliness, I went to the university pub hoping to enjoy the music and perhaps have a chance conversation. I found a young group playing the song of Glen Macclean, “Put your hand in the hand of the man from Galilee…”, which touched my heart. But I needed to think through a whole range of things, which required a lot of debate and discussion, and reading and study, so that I began to understand the message of Jesus the Lord, which is to enter into a personal relationship with Him. That made the biggest difference in my life. And, yes, I did go on to complete my Post Graduate Research in Management science and Operations Research. After that, there was a desperate search for a scholarship to pursue higher studies, but I also wanted to marry Sunita and her dad’s condition was that I should have a job!  It was a tough time.

A: I was well versed with Sanskrit vocabulary. I used to tell them, “My Guru is Yeshu Masih, the sanathan satguru. He fulfilled his dharma to pay for my karma to enable me to have Jeevan mukti.” They had question upon question for me.  With time, many members of the family also became followers of Jesus the Lord, while others continue in their own different ways.

Q: What are your views on the recent attacks on minorities in India?

A: Many philosophies and faiths have flourished in India over the last 5000 years, and there have been followers of Jesus in India for the past 2000 years. I doubt that any political or other group can change the deep-rooted tolerance of Indian culture. However, the attacks on human rights are a great setback for India, particularly the attacks on Hindus who disagree with Hindutva.  Also, the attacks on the rights of women, of Muslims, of Christians, of Dalits, of intellectual freedom and so on reflect badly on our civilization. In the popular image of India in the West, these attacks have become more prominent than India’s economic success or our journey towards becoming a superpower.

Q: Did the British rule hamper the growth of India?

A: Well, since the British left, we have had 14 Prime Ministers of our own now, and we have been independent for 75 years – which is three generations! Isn’t it time to ask ourselves, what we have done as against what other ex-colonies such as Hong Kong and Korea have done which have enabled them to do so much better than us?  Even Bangladesh has overtaken us in terms of welfare of people.

For all the damage done by British rule, it enabled India to become an independent country for the first time in our history. And they gave us basic infrastructure, like that of railways, roads, scientific and educational institutes, and indeed our administrative and legal structure.

But talking about the past should be left to historians. Now we have the resources, and should focus on making our people as educated and healthy and entrepreneurial as possible, so that our nation prospers.