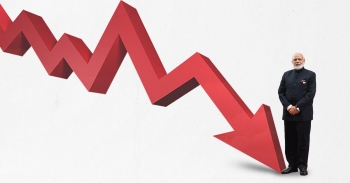 Right from the beginning of January 2020, Coronavirus has become the talk of the year. Many lockdowns and un-lockdowns have happened in the country to safeguard ourselves from the deadly virus. India and the US are having almost ‘neck-to-neck’ competition to reach the highest ‘coronavirus affected number’ in the world. Chances are in favour of India to reach first place in the near future.
Still we did have time to debate on India-Pakistan, Article 370 and Kashmir, Hindu-Muslim tension, CAA, NRC, NPR, Violence in JNU, Shaheen Bagh, Delhi Riot, India-China border, Hathras and Stand with Stan etc. Amidst all these commotions, most of us have missed to notice what is happening to Indian economy. Here are some of the “frightening facts”:

Hard facts:
•    36 largest debtors and bank loan defaulters are missing from the country.
•    Rs.2.4 lakh crores loan of a few corporate giants has been waived off.
•    Café Coffee Day founder VG Siddhartha committed suicide due to huge debt.
•    Constructions stopped due to Mat cost rise (GST at 18% to 28%) – no buyers of new houses - resulting in the suicides of big builders.
•    India is witnessing the highest unemployment in 45 years. Thanks to the Demonetization as the unemployment number rose mainly after it.
•    Rise in ‘brain drain’ and record high of High Net-worth Individuals (HNI) leaving India.
•    Domestic Stagflation - Highest recorded.
•    Every 15 minutes a crime is committed against a Dalit. 1000 Dalits are killed due to caste-based violence every year.
•    Every day 6 Dalit women are raped.
•    Every year 56,000 children of lower castes living in urban slums die of malnutrition.
•    Coronavirus arrived recently. But the ‘caste virus’ has been infecting India for centuries.
•    Caste-based violence in Tamil Nadu increased five times during the lockdown period.
•    Social isolation has been practiced for centuries in the form of ‘untouchability’ although Article-17 of the Constitution of India has abolished the practice of untouchability.
•    As per the official statistics, 282 manual scavengers died between 2016-19. As per NGOs, the actual number of deaths is over 1700. No lockdown has prevented these manual scavengers from their work.
•    Even today 90 percent of Dalits live in poverty.
•    Caste discrimination exists in every nook and corner of the country. Most of the social ills in our country are a direct result of the caste system.

Achhe Din -- For whom?
    The cost of SPG cover for PM Modi has sharply grown to Rs.592 crore in 2020-2021FY.
    The annual expenses of all ministers are 850 crores.
    The annual expenses of Chief Ministers and Governors are 77,000 crores.
    Expenses on all the government employees come to 3.25 lakh crores.
(Source for the above data: Google)
    In spite of the Indian economy touching the rock bottom, the self-made god-men/women like Sant Rampal, Asaram Bapu, Gurmeet Ram Rahim Singh, Radhe Maa, Baba Ramdev, Nithyananda, Sri Sri Ravi Shankar, Jaggi Vasudev and their ashrams are steadily accumulating wealth.
    Nithyananda, native of Tamil Nadu, has set up his ashrams in Karnataka. Jaggi Vasudev, native of Karnataka, has sent up a huge ashram in Tamil Nadu allegedly violating the forest ules. Thanks to the corporate-political patronage extended to these persons.
    While it is still a mystery as to how and when Nithyananda escaped from India, there are many reports of his new country, an island near South Ecuador. He seems to be having a real “gala time” wherever he is.
    Padmanabhaswamy temple, Sabarimala temple (Kerala), Meenakshi temple (Tamil Nadu), Tirupati temple (AP), Shirdi Saibaba temple (Maharashtra), Jagannath temple (Odisha), Somnath temple (Gujarat), Kashi Viswanath temple (UP) and Vaishnodevi temple (Jammu-Kashmir) have no dearth of money and wealth. In the name of God, who enjoys all this wealth?
    In short, the corporate giants, self-made godmen/women, corrupt politicians and criminal bigwigs are the people who enjoy the fruits of “achhe din”.

Challenge: The MLAs and MPs are the elected representatives of the common people. Hence, they need to live like common people. Should they not learn the simple lifestyle of the political leaders of the European countries, Canada and New Zealand? The Presidents and the Prime Ministers there live like common people ‘outside their duty hours’. They travel by public transport like bus, train and even use bicycles, to go to the market and do the shopping by themselves. Why such a system does not exist in India? In what way the Indian politicians are superior to these foreign politicians? Why do our politicians lead a life of pomp and extravaganza when almost 40 percent of the population live in abject poverty?
We need a change in the lifestyle of the political leaders. In order to save the sinking ship, a ‘systemic change’ must take place. Political-Corporate-Criminal-Religious network must be broken. Clean governance is the need of the hour.