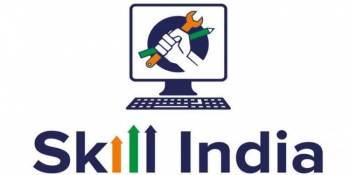 The National Skill Development Mission (NSDM) was launched on July 15, 2015. The mission’s task is to create convergence across sectors and States in terms of skill training activities. Further, to achieve the vision of 'Skilled India', the mission would not only consolidate and coordinate skilling efforts, but also expedite decision-making across sectors to achieve skilling at scale with speed and standards.

What is the field reality? Skill training in India among the unorganised sector, school dropout and illiterate youth attain very significant and crucial importance when the country is having school dropout rate ranging from 65 to 80 per cent. A bitter reality is that Vocational Training is not part of the academic curricula in our educational institutions. No wonder why India has just 5 to 10 percent skilled population (those who have completed formal skill training).

In India, recent reports indicate that over four million young people have lost their jobs. Further, more than 20 million people are expected to face job transitions in the post-Covid-19 employment market. Sectors such as customer service, food and hospitality, have taken a massive jolt while e-commerce and related industries such as warehousing and transport have seen some growth over the past year. However, this growth is not adequate to offset the losses in other sectors.

Here are some excerpts from an article written by Vandana Vasudevan, the Senior Fellow, World Resources Institute India, and Neharika Vohra, the Vice-Chancellor, Delhi Skilling University. “India’s demographic dividend -- the over-62-percent population in the working age-group of 15-59 years -- is expected to propel the nation to high growth in the coming years. But how and where will they find jobs during an unprecedented crash in the employment market triggered by the pandemic?”

“To state the obvious, only those who have skills that are in demand by the employers will be absorbed in the workforce. The demand-supply equations are staggering. The International Labour Organization (ILO) has indicated that India is staring at a 29 million skill-deficit by 2030. A 2019 report by Accenture projected that the existing skill gap, if left uncontrolled, will offset the nation’s GDP by $1.97 trillion (Rs.150 trillion) by 2028.”

“There is a huge skill gap in India as can be seen from the fact that only 30 percent of graduates from Industrial Training Institutes (ITIs), which are the backbone of vocational skill programs in India, get placed. Only a small minority venture into entrepreneurship, and the rest are unable to find jobs. Industry needs to play a vital role here by paying a premium to skilled workforce. While it may be apparently cheaper to hire untrained labour, the costs of training, mistakes, and lower productivity can all be overcome by paying a premium for skilled graduates. In addition, the industry needs to see partnerships with the ITI’s, colleges and universities as an investment in their future productivity.”

“India’s demographic dividend offers a great opportunity, with the proportion of its dependent population decreasing, and that of the working-age population increasing. However, this will not automatically lead to growth, unless there are timely policy interventions. The challenge of bridging the skill gap is urgent and vital to the government’s ambitions of making India a $5 trillion economy.”

Despite the presence of highly qualified people, majority of the workforce in India has very limited education and skills, which severely limit their chances of obtaining gainful employment. The incomes of the majority of workers are low or the quality of work they engage in is such that it is not enough for them to move out of poverty. Access to formal training for those with limited education has been extremely minimal. Institutional support in India to provide vocational training is very weak for both -- youth who have passed 10th class and who dropped out before reaching 10th class.

Even when people can access education and training opportunities, the quality and relevance of the skills obtained are often questionable and many people struggle to find employment as a result. Skills mismatch and limited training opportunities are common problems. The skilled artisans and craft persons are often not formally recognised/certified either. Those skilled crafts are reported to be in decline and calls for an intervention to retain such skilled crafts. A purely technical training aimed only at the professional technical content will not be sufficient to ensure success. It is important to include issues such as entrepreneurship skills, social behaviour, finance mobilization and market analysis along with generic skills.

On the one side, the organised sector professions alone are recognised and most sought after. We put so much pressure on our children to seek white-collar jobs like becoming doctor, engineer, job in armed forces, bank or government employment. Example: Rita (name changed) has completed her B. Ed and works in a private school in Bengaluru. Her monthly salary is Rs.7,000. Like her, there are many qualified teachers who after completing teacher’s training, Bachelor of Education and Master of Education etc. earn pittance – somewhere between Rs.5000 and Rs.10000. Yet, they pretend to be happy because of their status.

On the other side, we never encourage our children to take up professions like plumber, electrician, carpenter, welder, hair-dresser, automobile mechanic, driver, tailor, pottery and handicraft maker, traditional musician/dancer etc. because these do not have “social recognition”. Ramu (name changed), a carpenter from Uttar Pradesh works in Bengaluru. He has studied till 5th class. His weekly earning is about Rs.5000 and monthly earning is about Rs.20 to 25 thousand. Yet, skilled persons like Ramu are considered inferior and cheap.

SKILL has 5 words. If we remove the first letter S, then, what remains is KILL. If we remove the second letter K, then, what remains is ILL. The first lesson is that a person without skill, kills himself and others. The unskilled person is equal to a dead body. The second lesson is that a person without skill becomes ill or sick and a burden to the society. This person can never make constructive contribution to the society. Another important lesson is that Skill and Will need to strike a balance. A skilled person must have will power. These two qualities of Skill and Will pave way to growth/progress.

Skill deficit situation is the darker side of incredible India even after 75 years of Independence. Sadly, a vast majority of population is not aware of this scenario. As responsible citizens we need to create awakening among the people. We need to develop our own skills as well as undertake skill promotion wherever we are.