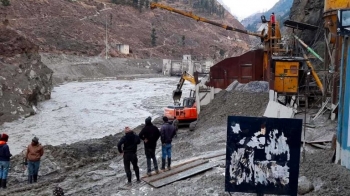 Act of God or Himalayan Blunder

The southern state of Kerala and the northern state of Uttarakhand have been experiencing large-scale destruction of property and loss of hundreds of human and animal lives due to natural calamities like floods, avalanches, landslides and cloudbursts during the last several decades.

Kerala witnessed the worst floods of this century in August 2018. It has been in several respects compared to the 1924 floods which washed away Munnar, the then most modern city in India, situated 6000 feet above sea level.

In its counter affidavit, filed before the High Court, the Kerala Government argued that the 2018 flood was an Act of God and could not have been prevented. The affidavit was filed in reply to a notice on a bunch of petitions filed by the Foundation for Restoration of National Values and others demanding a high-level enquiry into the mismanagement of dams and uncontrolled release of water, aggravating the damage.

Extremely heavy rain and consequent inundation of the State was a direct, violent, sudden and irresistible act of nature occasioned by the elementary forces of nature and totally unconnected in any manner whatsoever with the agency of man, the affidavit added.

Reading the affidavit, one is reminded of an oft quoted sentence in the Bible, “For in those days people were eating, drinking, marrying and giving in marriage right up to the day Noah went into the arc, and they suspected nothing till the flood came and swept them all away.”

However, advocate Jacob P Alex, the amicus curie appointed by the Kerala High Court in his report concluded that the 2018 Kerala flood was aggravated due to the mismanagement of dams and uncontrolled release of water.

For better flood and dam management in future there should be proper flood plain zoning, preparation of inundation maps, finalization of Emergency Action Plan (EAP), evolving of specific Operation and Maintenance Manual and proper Flood Forecast Systems, the report added. Dams in Kerala neither added to the flood nor helped in reduction of the flood fury is a misleading and incorrect assumption, the report concluded.

On February 7, 2021, in a glacier burst in Chamoli district of Uttarakhand, several people were killed and two hydroelectric power plants on which nearly Rs. 500 crores were spent were washed away. More than 150 workers are missing even one month after the tragedy and they are believed to have been buried deep under tones of debris of rocks and slush brought down by the glacier burst.

In the 2013 Kedarnath floods, some 6,000 people had died. Following the calamity, an Expert Body was set up by the Supreme Court to examine (a) the cumulative impact of the existing and under-construction hydro-power projects to environment degradation in Uttarakhand; (b) whether the projects have contributed to the Uttarakhand flood disaster, if so to what extent.

Disposing of a bunch of petitions, Justices K.S. Radhakrishnan and Deepak Mishra in their order in August 2013 directed that no environmental clearance be given to any project in the Himalayas either by the Ministry of Environment and Forests or the government of Uttarakhand until further orders.

The expert body report submitted in 2014 said that there has been irreversible damage to the Himalayan ecology of the Ganga river system due to the construction of the Hydro Electric projects. This was the main cause of the 2013 floods. The report prepared under Ravi Chopra, Director of the People’s Science Institute, Dehradun recommended among other things no construction be allowed above 2000 metres above the sea level.

Soon after the February 7 tragedy, Mr Chopra wrote to the Supreme Court: “Last Sunday’s tragic disaster has confirmed our fears and warnings. Hundreds of crores spent in the last seven years for constructing the dangerous dams have ended up with the loss of over 200 people, domestic animals and destruction of property.”

Kerala is currently ruled by a Communist government. The Bhartiya Janata Party is in power in Uttarakhand. However, on matters that concern the environment both governments have so far ignored warnings from environmentalists and have refused to learn lessons from past disasters. In 1924, Kerala had only one dam and in 2018 the small State had 79 dams. To claim that the sudden, simultaneous release of huge amounts of water from many dams did not aggravate the flood fury is on the face of it unreasonable.

Successive Uttarakhand governments, it has been documented, have been violating environmental regulations and court rulings to push for hydro-electric projects in the ecologically fragile and sensitive Himalayas. Though governments may claim the disasters were not man-made it is a fact that we have invited most disasters by encroaching on what rightfully belongs to the forests and rivers.