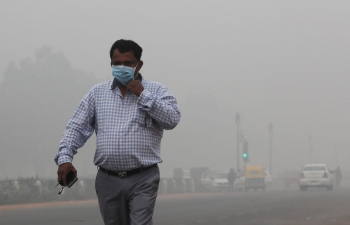 Air Pollution : Towards an Ethical Way Out

We are passing through difficult and trying times of the human history. There has already been a lot of suffering due to climate change and environmental pollution. Now, there is a respiratory virus ‘corona’, covid 19, around that has put the entire world almost upside down. The world in general and India in particular is feeling the terrible pinch of the same, in diverse ways. It is true that several laudable attempts across the globe are on for evolving an effective vaccine against it. But, all possible curative and preventive measures have to keep going on war footing till this menace, along with other connected ones, come under a clear control, obviously so.

Well, the creator has given us a beautiful creation to live in. This very same creation is the environment for us to have our being. As rational beings, we humans are supposed to be taking good care of the nature around us. But, by and large, we have not been rational enough in our behavior towards the environment. May be, we are too intelligent for ourselves and foolish for others, the country and the society as well as for the nature and the environment. No wonder, we are paying a heavy price for the same, to the point of being helpless victims of the environment, tragically so.

We know too well that air is one of the basic components of life. We are also aware that without air life is not possible and without clean air a healthy life is next to impossible, too. All the same, we are too much in the habit of polluting the environment and the air, by throwing dirty, harmful and poisonous things in to the open. We seem to feel so much at ease in spitting and doing away with other types of waste in the public space, anywhere and everywhere, very much like animals. We celebrate our festivals in such a way that we leave our neighbourhoods, roads, market places and parks filthy and stinking.

If this is the way we humans behave, it is not surprising that we find air quality in India much above the danger level, as Air Quality Index indicates. As a result, polluted air is the fifth major killer in India. The capital city Delhi has become the ‘capital of foul air’ and appears to be bent on breaking its own records as well as of the entire world. According to the survey, living in Delhi is understood to be reducing the span of life by 10 years, if not more, too. I think, it is high time we humans realized that many of our habits are not sustainable, at all. A lot of our behaviour and tendencies do not really suit human beings in any way either.

The logic is simple that ‘if we pollute the air, the air will pollute us’ in return, will make us sick and suffer very badly and even kill us. Therefore, as good caretakers of the environment, we have to ‘handle the air with care’. But, unfortunately, as of now, it does not seem that this good sense is coming to us very easily, just like common sense is not very common. Obviously, such a sorry state of affairs is not only idiotic but is an insult to the dignity of the human life as well as of the creator, who is the owner of that life.

We Indians are never tired of boasting that India is a religious country. It is true that almost all the major and minor religious traditions of the world are present in India. All these traditions put together, we have at our disposal a very high volume of beliefs. The amount of time and money we spend in pious instructions, devotions, observances and pilgrimages are really beyond measure, too. But, all these ceremonies and performances do not seem to produce much result for life. It appears that religion in India is more part of the problem than of the solution. To say the least, religion and religions in India do not seem to have equipped us with the basic good sense required for keeping the atmosphere clean and healthy. I think, this is a major setback for our country and is a matter of serious concern. No doubt, it requires being attended to, on a priority basis.

I think, the way we have understood religion and the way we engage with it require being revised, from the angle of the concerns of our collective living. Religion is not a mere passport to go to heaven. Religion has to produce a vibrant faith that is capable of making ‘good human and social beings’. Faith has to motivate the humans towards behaving in an ethical and responsible manner, in the public space in special. Faith has to be understood on realistic terms. It has to necessarily contribute to the quality of life and its surroundings. In other words, faith has to build up in human beings good values that have the power of sustaining the health, wellbeing and wellness of human and other forms of life on earth.

A ‘good, enlightened and responsible conscience’ is the need of the hour. Faith is not all about heaven and life after death. Faith has to be situated ‘here and now’, in life on earth, in the creation, in the environment and in the good air. Faith has to be in oneself, in others, in the country, in the society and in the creator, too. Such an applied and reasonable faith would develop positive thinking and awaken a sense of duty towards life. Manifestly, only clean thoughts can make a clean environment with good air possible. ‘Spiritual awakening’ is the most substantial measure in combating the menace of environmental pollution. Only self-motivated persons are capable of behaving in a responsible manner. Only accountable behavior can contribute to sustainable living. A strong ‘ethical fibre’ is required for mending the unclean habits that have become part of our lives.

‘Cleanliness is next to Godliness’. The sacred is not compatible with anything that is unclean. Our search for God will never reach its intended destination in unclean premises and surroundings. We have to live our faith here on earth, in the given environment, in such a manner that we are able to spontaneously think for the good health and wellbeing of others, of the country, of the larger society and of the entire creation. We have also to learn to collaborate with people of good faith in all communities, in view of making the social living clean, healthy, harmonious and happy. Well, polluted air is the wakeup call for the leaders and believers of all faiths in India, religious and not religious, to stand up on their feet and act in favour of the wellbeing of one and all.

Only such a larger and down-to-earth faith can keep us ‘ethically, spiritually and humanly fit’ and make it possible for the environment and the air around us to be clean and dignifying. Only a religion, a faith and a spiritual awakening that is grounded in an empowered conscience, along with its ethical fibre, can ensure the sustainable living of the humans in the creation and in the environment. Good air and environment has to take the shape of a major campaign with the application of all possible means for arriving at the intended effect. That would amount to state that we humans are called upon to commit ourselves to building a better tomorrow for our country and beyond, by mending our foul ways today, in terms of the environmental and air pollution that is the burning the lives of the humans as well as is the burning concern of our times.

(The author is Founder Director of Institute of Harmony and Peace Studies, New Delhi, and can be viewed at ‘www.mdthomas.in’ and ‘www.ihpsindia.org’ and can be contacted at: mdthomas53@gmail.com)