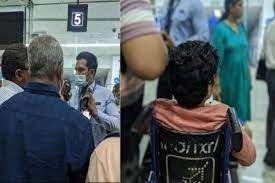 On May 7, the Indigo Airlines did not allow a specially-abled child and his parents to board its flight to Hyderabad at the Ranchi airport. The incident came to light after other passengers posted about it on social media.

Although the child and his parents were frequent fliers, on the day of the incident, he was said to be in a state of panic when the family arrived at the airport. However, his parents had quickly brought the situation under control.

Nonetheless, the ground staff of Indigo refused to let him board till he became more normal. Reportedly, though he had calmed down before the take-off time, the airline staff stuck to his stand saying that his behaviour posed a risk to other passengers. Indigo Airlines did provide the family hotel accommodation for the night and flew them to Hyderabad the next day.

No sooner than the incident had generated sharp reactions from several quarters, Civil Aviation Minister Jyotiraditya Scindia was quick to respond to a social media post. He stated, “There is zero tolerance towards such behaviour. No human being should have to go through this. Investigating the matter by myself, post which appropriate action will be taken.”  In line with the Minister’s assurance, the Directorate General of Civil Aviation (DGCA) has deputed a three-member fact-finding team to probe into the Ranchi airport incident.

Notably, unruly passengers can pose a serious problem for airlines. They can delay flights and in the worst-case scenario hurt other passengers or crew members. So, in all such situations they are a nuisance to the people around them.

But in this case, it was a child with special needs who was a frequent flier and not unruly.

After the matter received public attention, the Indigo Airlines while expressing “sincere regrets” and offering an electric wheelchair for the child,  defended the action of its staff for having taken the best possible decision under difficult circumstances.

Under the Aircraft Rules, 1937 (Part III General Safety Conditions - 24A. Carriage of persons suffering from mental disorders or epilepsy in aircraft) the relevant extracts as under:

No person shall knowingly carry or permit to be carried, or connive at the carriage of, a person suffering from any mental disorder or epilepsy in any aircraft:

Provided that this prohibition shall not apply if the person to be carried is certified by a registered medical practitioner to be fit to travel by air without being a risk to other passengers or to the aircraft, and in addition:-

(a) has not taken or used any alcoholic drink or preparation within twelve hours of the commencement of the flight;

(b) is kept under proper sedative, if in a state of excitement, during the flight and stops enroute; and

(c) is accompanied by an attendant, provided that in case he has been in a state of excitement requiring sedation within the two weeks preceding the date of commencement of the flight, he shall be accompanied by a registered medical practitioner and adequate escort who shall individually and collectively be responsible for ensuring that no alcoholic drink or preparation is taken by the person in their charge and that such person is kept suitably sedated during the flight and stops enroute.

Well, the ongoing DGCA instituted inquiry is expected to unravel what exactly happened but the cause for concern is that when there are guidelines as well as court orders to ensure rights and equal treatment for people with special needs why are they not being followed in letter and spirit?

Even though air travel is most preferred for a plethora of reasons, in recent times, the operating environment in airports across the globe has been seeing lots of changes. The ground experience before boarding an aircraft can be frustrating for several people. Many passengers tend to arrive quite early to get inside the airport but the greatest uncertainty they can face is the time spent at the security checkpoint. Thereafter, finding the gate and getting past the queue for boarding the flight all makes it tiring at times especially for the old and persons with special needs.

This March, a professor complained that he was not allowed to board an Air India flight from Bengaluru to Kolkata for his refusal to remove the batteries of his wheelchair. According to him the wheelchair was designed to be taken by air without removing the batteries which were fitted with dry-lead acid sealed cells. The airlines, however, justified its action stating that leaving the batteries in the wheelchair flouted safety guidelines.

Way back in 2012, Jeeja Ghosh, an eminent activist involved in disability rights, born with cerebral palsy, was to fly from Kolkata to Goa on 19 February 2012 by a Spice Jet flight. She was invited to participate in an international conference related to her field of work.

After being seated on the flight, she was approached by the flight crew who requested to see her boarding pass, which she gave them. Then they proceeded to order her off the plane. Despite her tearful protestations and informing them that she needed to reach Goa for the conference, they insisted that she de-board. After returning to the airport and arguing with airlines officials, she later discovered that the Captain had insisted that she be removed due to her disability.

She moved the Supreme Court in respect of the treatment meted out to her by the crew of Spice Jet. In the judgment of 12 May 2016, the Apex Court noted: “It is the common experience of several persons with disabilities that they are unable to lead a full life due to societal barriers and discrimination faced by them in employment, access to public spaces, transportation etc. Persons with disability are the most neglected lot not only in the society but also in the family. More often they are an object of pity. There are hardly any meaningful attempts to assimilate them in the mainstream of the nation's life. The apathy towards their problems is so pervasive that even the number of disabled persons existing in the country is not well documented… Jeeja Ghosh herself is a living example who has, notwithstanding her disability, achieved so much in life by her sheer determination to overcome her disability and become a responsible and valuable citizen of this country. A little care, a little sensitivity and a little positive attitude on the part of the officials of the airlines would not have resulted in the trauma, pain and suffering that Jeeja Ghosh had to undergo. This has resulted in violation of her human dignity and, thus, her fundamental right, though by a private enterprise (Spice Jet)”. For acting in a callous manner and violating Aircraft Rules, 1937 and Civil Aviation Requirements (CAR, 2008 Guidelines) resulting in mental and physical suffering experienced by Jeeja Ghosh, Spice Jet was directed to pay Rs 10 lakh as damages to her.

The Court had also observed that suitable amendments are required to be made in those CAR, 2008 guidelines in order to effectively take care on persons with disability. By its judgment of 1 December 2021, the Supreme Court has ruled that differently abled persons with prosthetic limbs/calipers are required to be checked for the purpose of security in a manner where no such person is asked to remove prosthetic limbs/calipers to maintain human dignity while ensuring the requirement of security checks.

But then human behaviour is rather complex. So, was the Indigo Airlines staffer who did not permit the child from boarding the flight at Ranchi ignorant of the rules? Or does it reflect a lack of empathy? Was he speaking up and standing up for himself? What one can infer from the social media video grab of the incident is that he was simply not listening to the public who were in favour of the child boarding the flight. Why can’t some people to be tolerant for another’s opinion? Studies have shown that stress associated with certain occupations can have a host of consequences and airline crew can face penalties for not enforcing safety regulations. So, is it better to err on the side of caution?

Instances galore where some passengers have been very rude and nasty to the airline crew. A recent online survey of 5,000 flight attendants across 30 airlines in the US found more than half had experienced at least 5 incidents with unruly passengers. The survey data found 71 per cent of the flight attendants who filed ‘incident reports’ with their management didn’t receive a follow up and a majority didn't observe efforts by the airlines to address issues with unruly passengers.

There is an imperative need for airline companies to train their employees for cultivating a measured response in the face of stress at the workplace. But most importantly, they must treat passengers with empathy, especially the old and those with special needs. To forestall situations like the Ranchi airport incident, it is necessary that besides the availability of a senior officer of the airlines for escalation of unsolved issues, deploying a government-approved medical practitioner at airports merits immediate consideration.