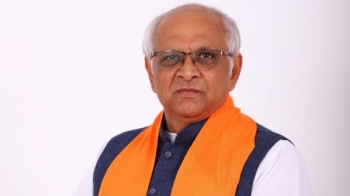 All is not Well in Gujarat

In a major surprise, like the demonetization to scrapping of Kashmir’s special status to the lockdown, low profile first-time MLA Bhupendra Patel was selected as the new Chief Minister of Gujarat. The name of Patel was announced after a meeting of BJP leaders and MLAs, and is believed to be the personal choice of Prime Minister Narendra Modi. With almost all the ministers dropped, is the Gujarat Model in shambles?

The oath-taking ceremony of Bhupendra Patel scheduled to be held on Sept 15 was deferred to 16th owing to the high-level resentment on the part of the MLAs and Ministers. According to political experts, the rift between Amit Shah and Narendra Modi has come to the fore with the appointment of the new Chief Minister in Gujarat. Outgoing Chief Minister Vijay Rupani, a close aide of Shah, has been replaced by Bhupendra, a confidant of Anandiben and Modi. Has Shah paid the price for his failure in West Bengal poll campaign, or on Kashmir issues, or for certain internal moves that have damaged the image of Modi.

Bhupendra is a legislator from Ghatlodiya Assembly seat in Ahmedabad and bagged the seat with the highest margin of votes after his mentor Anandiben moved away as a Governor. In 2016, Rupani, from the Jain community, had been selected as the Chief Minister at the instance of Amit Shah. Patel has his roots in north Gujarat and is a Kadwa Patel. Most of the other Patels in BJP are Leuva Patels who belong to Saurashtra. With the entry of Bhupendra Patel, a question mark has been put on the future of present deputy Chief Minister Nitin Patel who is also a Kadwa Patel.

The choice pf Bhupendra came like a wild-card entry in the Gujarat BJP's power equation as he is the first-time MLA. He held the positions of the president of Memnagar municipality in Ahmedabad, was the chairman of the standing committee of the Ahmedabad Municipal Corporation (AMC) and Ahmedabad Urban Development Authority (AUDA) in the past.

BJP wants to continue its winning spree, come what may. The three major reasons for the change of guard seems to be that of Rupani’s bad administration to handle the Corona menace, a move to please the Patidar community and covering up the anti-incumbency, keeping the forthcoming Assembly elections in mind.

The state of Gujarat is ruled by a three engine BJP Govt in the Centre, State and local MCD. Rupani was just a puppet in the hands of Central leadership and he has been made a scapegoat for the misrule and bad equations with the state party chief C.R. Patil. Based on the performance, the BJP is unlikely to return to power.

Earlier, parties like NCP, SP, and BSP were sponsored to contest in Gujarat so that the Congress votes were split in favour of BJP. The recent win of 27 AAP councilors is an indication that it will again split the Congress votes, leading to the BJP win. Gujarat is the laboratory of BJP politics and will certainly not give up so easily. Only time will reveal if the Congress is capable of giving a tough fight to BJP under the leadership of a very popular but an acting president Hardik Patel.

The Patels comprising about 17 percent of the voters are very homogeneous and conscious of their own identity and status. They are also prosperous and entrepreneurial, which make them very influential. Earlier, it took years to convince the former Chief Minister Keshubhai Patel, a strong Patidar leader, to fall in line and make way for Modi in Gujarat. The thinking at that time was that the BJP in Gujarat was over-dependent on Patel votes and this did not augur well for the party. Evidence of this at that time (around 2015) came in the form of the Patel agitation that brought BJP on the back foot at that time. Therefore, Modi with the help of Amit Shah tried to break the Patel stranglehold. This is why Vijay Rupani was anointed as the Chief Minister.

In the past five months, four BJP CMs have been changed, including that of Assam, Karnataka and twice in Uttrakhand. Changing chief ministers is a new trend in the BJP. Assam saw an electorally successful Chief Minister being dropped in the state. Karnataka saw an age-bar-defying Chief Minister replaced. Uttarakhand saw two Chief Ministers taking over and then relinquishing the post in a short span of time.

Gujarat Congress working president Hardik Patel says the party’s relentless campaign against Vijay Rupani government’s mishandling of Covid-19 pandemic and unemployment in the state “made the BJP nervous”, which is why he had to quit. With the BJP choosing a Patel Chief Minister ahead of the 2022 Assembly polls, he says a CM belonging to one particular community “doesn’t matter to the people of Gujarat”.

Nitin Patel was a chief ministerial aspirant not only this time but also previously when Vijay Rupani was appointed. But Nitin did not meet the BJP high command’s approval both times. After Bhupendra Patel called on him ahead of the swearing-in ceremony, Nitin said, "Bhupendra Patel is an old family friend. I congratulated him. We will be happy to see him take oath as the CM. He has also asked for my guidance whenever needed." "I'm not upset. I have been working in BJP since I was 18 and will keep on working. Whether I get a position in the party or not, I will continue serving in the party," he said.

Nitin Patel had tears in his eyes after meeting Bhupendra Patel. He said the party has given him a lot in the 30 years of his association and there are no qualms. While addressing people during a function in Mehsana town on the day of announcement, he said in a lighter vein that he was not the only one who had missed the bus as there were "many others" like him.

Giving a hope to the general public is a well-established poll tactic, be it like a special package for Bihar, providing 2 crore jobs to the unemployed, crediting Rs 15 lakh into every account, bringing in black money from the Swiss account, and the list goes on…These hopes can crown you once or may be twice, but at the end of the day, what matters is the result in the form of development and standard of living. Winning an election, and running a government effectively is altogether a different ball game.