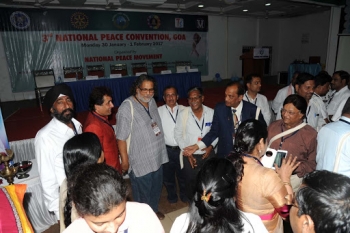 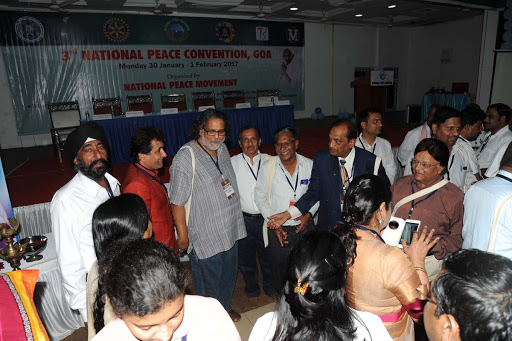 Peace is not the absence of physical or direct violence. There are various factors that lead to violence. The violence that took place on Capitol Hill, Washington on 6th January was not a sudden outburst of the anger of a crowd. The violence was the result or culmination of a process of divisive politics that started with the presidential election and accentuated by the rejection of the election victory of Joe Biden by Donald Trump and his hard core supporters. On further analysis one can find other deep rooted causes for absence of peace in the American society. Prejudice against certain sections of the society, discrimination, injustice and lack of social cohesion etc could be the root causes of the violence that irrupts often.

The United States witnessed widespread violent protests in May-June against the brutal killing of an African American, 46 year old George Floyd, by a white police officer in Minneapolis in May 2020.   The death of George Floyd is seen as an outburst of racially driven police brutality. According to a study conducted by The Guardian in 2016, the rate of fatal shootings by the police per million people was the highest for the Native American (10.13), the Black (6.6), and white people had a rate of 2.9. A Washington Post database showed that African Americans were 2.5 times more likely to be killed by a police officer than white people. Prejudice against African Americans and racial discrimination seem to be a serious cause for conflicts, violence and division in the American society.

“Since wars begin in the minds of men, it is in the minds of men that the defences of peace must be constructed”, states the preamble to the UNESCO’s constitution. The main purpose of the National Peace Convention (NPC) is to contribute to the realization of the vision of the UNESCO and the United Nations i.e. building defences of peace in the minds and hearts of people. In a world that is torn with various kinds of conflicts, hundreds and thousands of small and big efforts are needed to build peace and NPC is one among them.
Peace building can be visualized at four levels: personal, interpersonal, inter-group and peace between humans and the earth. NPC is conceived as a support for building peace at these four levels. First and foremost, individuals have to experience peace within themselves. A person who does not enjoy peace within himself or herself will not be able to become an agent of peace building. On the contrary, he/he can become a cause of disturbance and chaos in the society.  The National Peace Movement and NPC give priority to the establishment of peace within the individual. With this objective ‘peace meditation’ was included as part of the National Peace Convention. This year the convention starts with a prayer for world peace under the guidance of Dr. Paul Poovathingal a specialist in Carnatic music. The members of Peace Clubs are encouraged to pray daily for peace and the meetings of Peace Clubs start with inter-religious prayer for peace.

Respect for the other persons, justice, acceptance of diversity and cooperation are needed to nurture interpersonal peace. One of the goals of NPC is to promote the ideals of Mahatma Gandhi. Gandhiji always insisted, “You be the change you want to see in others”. Pluralism in the form of acceptance, appreciation and celebration of diversity is a significant contribution of Mahatma Gandhi along with truth and non-violence. A core value of Indian constitution is FRATERNITY that guarantees human dignity. One of the action plans of the NPC in the previous two years was disseminating and practising the core values of Indian constitution: Justice, equality, liberty and fraternity that ensures the dignity of the individuals. The schools that had sent their students for the Peace Convention organized various programmes for the dissemination of the values of Indian constitution as a follow up of the convention.

Peace among the various groups within a nation has become very essential in today’s world. Conflicts among the religious and ethnic groups often lead to violence at different places. The communal violence in East Delhi in February 2020 killed 53 people and destroyed property worth crores of rupees. The purpose of inviting persons belonging to different religious and ethnic groups and professions to the National Peace Convention is to create understanding among these groups. One of the action plans of NPC 2020 was celebrating the festivals of all religions in educational institutions and social organizations and using passages from different religious scriptures for conducting inter-religious prayers.

One session of the forthcoming National Peace Convention 2021 is dedicated to the theme, ‘Preserving the Heritage of Unity in Diversity to Sustain Peace and Harmony’. The speakers will be sharing their experience of promoting unity while accepting and appreciating diversity in religion, language, caste, culture etc. When political parties and political leaders often try to polarize people on the basis of religion and caste for creating vote banks, there is an urgent need for uniting people focusing on the issues that affect them. As practice from the very inception of the National Peace Movement, no politician is invited to speak during the National Peace Convention.

During the last four National Peace Conventions, young people, especially students from schools and colleges, were taking part in large numbers and some of them were given the opportunity to speak on various aspects of peace building.  This year also 8 young people will be sharing their ideas and views on peace building. The youth are open and they want people belonging to different communities and groups to live in harmony and work together for the progress of the nation. The National Peace Convention gives them an opportunity to share their views as well as to get inspired to transcend the boundaries of religion, caste, language, culture etc. This is a humble attempt to prevent them from being brainwashed by the communal and divisive forces.

Respect for the environment, sustainable living and simple lifestyle are the means for facilitating peace between humans and the earth. Protecting the earth and its resources has been one of the themes of the National Peace Convention. The forthcoming NPC 2021 will have a talk on the topic, “Invisible Link between Peace and Sustainable Development”.

Underdevelopment as reflected in poverty, hunger, ill health and the widening gap between the rich and the poor is one of the causes of conflicts and violence. Creating sensitivity towards the poor and the needy and motivating the participants to share their resources with the needy has been one of the goals of NPC. One of the action plans of Peace Convention 2020 was to take the students for regular exposure programmes to the situation of the disadvantaged groups  for creating in them social awareness and sensitivity. The fourth session of NPC 2021 is set apart for the theme, Peace and Development.

Antonio J. Ledesma S J in a presentation under the title, ‘Promoting a Culture of Peace: Six Dimensions and Operative Values’ has highlighted six values that are to be inculcated in the people in order to build a culture of peace. They are spirituality, justice, compassion, dialogue, active non-violence and stewardship. The themes and topics selected by the organizers of NPC are aimed at inculcating in the participants these values. For example, four high school students who spoke during the 2020 Peace Convention focused on these values based on the life and teachings of Mahatma Gandhi.

Through the speeches, experience sharing, deliberations and discussions during the NPC, an attempt is made to realize the four goals of peace education or four pillars of education as described by UNESCO. They are 1) Learning to Know –awareness of world issues and their solutions 2) Learning to do  - active involvement in solution building 3) Learning to be - development of attitudes and commitment to global citizenship and 4) Learning to live together - demonstrating respect for self and others.

The core theme that ran through the various sessions of 2020 NPC was ‘defeat hatred with Gandhian and Indian constitutional values’. The year 2020 was highly distressing for almost all sections of society due to Covid 19. It infected more than 9 core people and killed more than 19 lakhs throughout the world, besides shattering the world economy that resulted in millions of job loss and increase in poverty. Instead of joining together to attack the fatal virus, a common enemy of humanity, what the world witnessed was hatred, revenge, division and even violence both within the nations and between the world nations. The most powerful nation in the world, the USA has the highest number of deaths and infections due to coronavirus along with the most belligerent display of a politics of hatred, revenge, division and violence. India remained the second both in coronavirus infection and the practice of the politics of hatred and revenge.   The National Peace Convention 2021 is an occasion to reflect and plan for healing, reconciliation and building bridges.