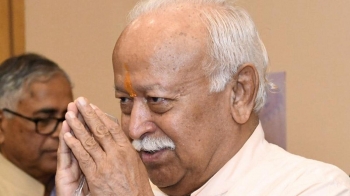 There are constant reminders that we are not a homogeneous nation, but one riven by caste and religious divisions, the most lethal of which is the Hindu-Muslim divide that, like a malignant contagion, has even spread to the Indian diaspora in its most vicious primeval form. The recent violent clashes in Leicester after the Asia Cup India-Pakistan T20 match and the heightened tensions between Hindus and Muslims in New Jersey following the showcasing of a bulldozer at the local Independence Day parade, have not surprised anyone in these “Howdy Modi” times. Nor has anyone been jolted by the Indian High Commission’s official statement condemning the violence but clearly betraying its partisan concerns by highlighting the “vandalization of premises and symbols of Hindu religion”, thereby equating one community’s problems with the nation’s problems, while blotting out the plight of fellow-Muslim Indians.

At home, the cracks are getting wider. As has been happening in the last eight years, the communal cauldron is kept boiling. In a move that will only further exacerbate communal tensions, the government, in the early hours of September 22, swooped down on the Muslim-dominated Popular Front of India (PFI), arresting around 100 members from various parts of the country.

Founded in 2007, the organization describes itself as “a neo-social movement which strives for the empowerment of marginalized sections of India”, and it is no secret that it has fashioned itself on the lines of the RSS in form, incorporating martial exercises and parades as part of the routine for its cadres. It gained notoriety in 2010 when some of its members chopped off the hand of a college professor for alleged scurrilous references to the Prophet. In the past, there have been violent clashes between the RSS and the PFI in Karnataka and Kerala. The latest crackdown on the PFI has provoked a howl of protests by Muslims across the country.

It is in this fraught context of communal disharmony that one needs to view the front-page news of a recent meeting between the RSS chief, Mohan Bhagwat, and five “eminent Muslim intellectuals”, including one who was the hatchet man of this regime till his luck ran out. According to one of the eminences, the purpose of the visit to the RSS Delhi headquarters was to “bring up concerns of the Muslims and to know the issues that the RSS had with Muslims”; in essence seeking to build a bridge of understanding between two hitherto irreconcilable entities.

Anyone who has watched the inexorable, ruthless march of Hindutva to the very center of the body politic under the leadership of Mohan Bhagwat in the last few years, would dismiss such a venture, most charitably, as a fatuous exercise that will change nothing. Hindutva’s lifeblood is an implacable hatred of the Muslim who must pay for historical wrongs committed against Hindus. The relentless hate-mongering of the RSS and its cohorts that has seeped into the minds of an overwhelmingly large section of Hindus is going nowhere, and anemic petitions to the Hindutva papacy are nothing more than so many straws against the storm.

The hush-hush meeting took place at the end of August and the almost three-week-long silence thereafter was broken only when some snoopy journalists made the parleys public with riders such as “According to one of the members of the group who did not wish to be named…” Did they initially have second thoughts about the wisdom of holding such a meeting that achieved nothing and possibly compromised the interests of one community? That’s not how these worthies construed the meeting when they eventually emerged from the closet.

Latching on to the crumbs thrown their way as concessions by the RSS Sarsanghchalak, they noted his acknowledgement that Muslim citizens are not to be called Hindu Muslims but Indian Muslims and that referring to Muslims as jihadis was wrong and hurtful.  They would also like to believe that he conceded the impossibility of India’s Muslims outgrowing and dominating Hindus or that they sought to do so. But they have got very naïve to believe that “Ham paanch hamare pachees” will no longer be a rallying cry of the bhakts because their leader has now been educated by the group on the realities of population growth, a fact that, they think, he was not aware of till this closed-door meeting. Their simple-minded evaluation makes me want to cry!

Playing along with these do-gooders and making concessions purely in the realm of semantic superficialities, the Sarsanghchalak succeeded in his intent of portraying the RSS as the embodiment of rationality, fair-mindedness and simplicity. One member gushed in admiration: “Despite being so powerful, he lives in a very simple room with very simple furniture.” Mohan Bhagwat, and by inference the RSS, emerged from the meeting wearing a halo of accommodation and tolerance.

The meeting with Bhagwat was so choreographed that no substantive life-and-death issues concerning Muslims were raised. The CAA, the abrogation of Article 370, and, most important, the ongoing controversy around the Gyanvapi mosque were clearly out of bounds. On the contrary, Bhagwat upbraided these self-appointed Muslim "spokespersons” for not amplifying his munificent message on the Gyanvapi Mosque controversy, that “there was no need to find a ‘shivling’ in every mosque and start a new dispute every day,” which he believes is a major concession to Muslim sensibilities, as was his imperious assertion that the Court’s verdict in the matter would be honored.

He was not reminded by the five supplicants that he was not above law or that the constitutional bench of the Supreme Court, in its 2019 Ayodhya verdict granting the Babri masjid site for construction of the Ramjanmabhumi temple, had categorically prohibited further conversion of any place of worship and imposed a positive obligation to maintain the religious character of every place of worship as it existed on 15th August, 1947, in terms of the Places of Religious Worship Act, 1991.

One step at a time is clearly the Sarsanghchalak’s strategy. He knows that in the present environment, when faith (of the majority) has been placed above the law as in the Ayodhya judgement, it is more than likely that the Courts will privilege the Hindu hypothesis in the Gyanvapi mosque dispute. Meanwhile, he is working to soften Muslim resistance to change in the status of the functional Gyanvapi mosque. Of course, in the event of the courts delivering justice on the basis of jurisprudence, the extra-constitutional methods, as applied in the Babri Masjid case, are ready at hand, despite his protestations about such a recourse.

It is difficult to fathom the rationale for the meeting between the Sarsanghchalak and the group of five, especially when no substantive issue concerning Muslims was discussed. Their unsolicited intercession on behalf of the beleaguered Muslim community with the RSS chief, was a damp squib. Whether intended or not, the only positive outcome of the meeting is that Mohan Bhagwat has emerged as the voice of reason and moderation, publicly and heartily endorsed by the Muslim interlocutors.

The group of five drew a blank. And yet in a recent interview, one from this elite group stated that 90 percent of Muslims endorsed their interaction with the RSS chief, with his compatriot going further in stating that 99 percent of Muslims he knew approved of the deliberations and their point of view. But surely these gentlemen know better than to think that they could make any headway with the doyen of Hindutva. In any case, as Karan Thapar pointed out, they should have approached the PM or Home Minister who are the arbiters on most issues agitating Muslims.

In the ultimate analysis, it was a meeting of unequals and a classic example of propitiation of the oppressor who calls the shots. And these Muslim luminaries should know that appeasement never works!

(The writer is a former civil servant and Secretary-General of the Lok Janshakti Party (Ram Vilas). Views are personal)