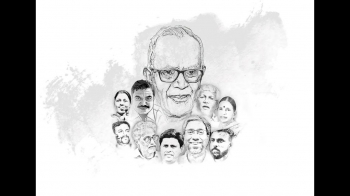 The arrest and imprisonment of 83 year old Father Stan   (Stanislaus Lourduswamy) has created an unprecedented protest from various groups  of civil society  and religious  all over India  and in different countries of the world thanks to the national and international presence and influence of Jesuits. A webinar was organized by the Madhya Pradesh region of CRI and the Forum of Religious  for Justice and Peace on 21 October 2020.

The  participation  of  three excellent speakers who  had  experience  of working  for several years  defending  human rights of the poor and the marginalized  was very motivating. Organizers succeeded to get Teesta Setalvad,  Medha Patkar and  Fr. Cedric Prakash.  All three speakers presented the frightening realities of the present socio-political scenario and called for urgent actions from the part of the consecrated men and women of the Church. I wish to present some of my striking observations, insights, questions and a few proposals for immediate action.

All the three speakers enlightened the participants about the well planned strategies and actions of the Central Government which are detrimental to tribals, dalits, the poor, the marginalized, women and the minorities, especially Muslims and Christians.  All the three spoke in clear terms that the Central Government is following a fascist style of silencing  and terrorizing  all who dissent using law enforcing agencies.  Politicians, bureaucrats and even those in judiciary are forced to toe the line of the government which is controlled by the Hindutva forces.  Speaker after speaker spoke how ministers, bureaucrats and all who are parts of the government violate the very soul of India which is the foundation of the Constitution.

The talks were full of information, spiritual insights, challenging the complacency and ignorance of clergy and religious, the urgency of prophetic life and action, calling for returning to the way of Christ, need for alliance and networking with various organizations to fight against the oppression and exploitation by the government and private firms looting the land and resources of the nation.

At one time 266 participants joined. A few more must have joined as many communities were participating in groups. Going through the list of participants I could see a large majority were women religious. There were only 22 male participants: 2 Lay persons, 3 brothers, 14 priests from religious congregations and Bishop Chacko of Indore diocese.  The organizers had invited maximum priests and religious from all parts of India. It was sad to see that more than 100 participants left in the middle of the meeting. What was the urgency that they had to leave in the middle of such an enlightening meeting which was related to their life and mission?

As the Church is clergy dominated, how can it make any serious action plan when the powerful clergy is neither aware of the threats nor feel the urgency for any change from the routine practices? Despite all goodwill, how do the nuns who participated in the enlightening session act when the clergy doesn’t feel the need for any action? How will they   get involved in any programme unless their superiors approve their action plan?

There were a few major superiors of women congregations present for the session. There are many things which priests and nuns can do even at their personal level. How many of those who heard such inspiring talks from the persons   who spoke from their heart   must have resolved to wake up themselves through contemplation to become aware of the context and make resolutions to change their priorities?

Fr. Cedric Prakash rightly said about the need to become aware of the socio-political context and issues affecting the people especially the poor. This context should be the content of our contemplation and relate the issues to the life and teachings of Christ. Each one shall ask the question: “What Jesus would do if He were here?” Once we are awakened, then we should shed all our fear and anxieties. An awakened person cannot look for the support of any crowd to get into action. Prophets don’t look for any companion to follow them. They are ready for taking any risk and alone. Once Mother Theresa  was awakened   and enlightened  by contemplating  the realities  in the Calcutta streets  around her convent, she did not hesitate to quit the comfort  and security  of the convent  life  for  doing God’s mission. The same is the story of all prophetic persons.  Today we see more such prophets outside the Church than inside it because they are not conditioned by the routine rituals and rules.

Though Fr. Stan had been working for more than five decades for the  rights of the poor Adivasis,  he had to be arrested and imprisoned  for the Church to know   his greatness. Yet how many religious, priests, bishops and laity of this country have taken the trouble to learn lessons from his prophetic life and action?

It is very repugnant to see a section of Catholic preachers spread negative propaganda through YouTube channels against Fr. Stan that justifies the lies of NIA and  the  BJP government. Why don’t the Church authorities stand with Fr. Stan and condemn such preaching?  In the past whenever churches were attacked, nuns were raped  and priests were killed  in different parts of India  the Church in India never stood  united and spoke out.

If the Church in India wants to be loyal to Christ and His mission it should motivate and mobilize its large number of  consecrated persons and laity to become genuine disciples of Christ and get into prophetic action. As Martin Luther King Jr. said, “If you have not identified the cause for which you should die, you have no reason to live”.  Once we identify the cause for which we want to die we will be free from fear of arrest, imprisonment and violent death.

5. Repent, the Kingdom of God is at hand.

Urgency was the characteristic style of Jesus. He was a person in a great hurry. The church leaders and consecrated persons are dead slow. They are bothered about their security and future. They want to protect their institutions and estates. They have done this over the centuries. When the business interest and protection of institutions become the first priority, Christ and His mission are neglected.

It is time to make a paradigm shift in our policies and priorities. Our vision and mission should be in conformity with the life and teachings of Christ.  It is important to understand the meaning of the teaching of Christ, ‘put the new wine in new wineskins’ and learn to make practical applications to reorient our vision and mission.

Protest against the arrest of Fr. Stan and other such incidents, is necessary for finding an immediate solution. However, preparing a long term strategy and action plans are important to preserve the Indian ethos enshrined in the preamble of Indian Constitution. This can be done by focusing on mentoring of the youth. Without taking youth into consideration none of the deliberations and actions plans will bear lasting fruit.

We are already late. If we still remain complacent, lazy and self righteous, we are bound to perish.  The students whom we have educated through our educational institutions will be those who would stand against us, as we have already seen during the last few decades. Even those who receive our charity would not stand with us.  Fr. Cedric Prakash was right when he concluded his talk saying, “we have done enough charity works and social service. Let us stop them now and get involved in political action in collaboration with other prophetic persons and organizations”.

In conflict situations let us look at Jesus and ask, ‘What would Jesus do if He were here? What is the mind of Christ? What is the heart of Christ’?

If we want to “wake up the world” as Pope Francis wants, first we need to wake up to the realities of what is happening around us and in the world. We cannot give what we don’t have.