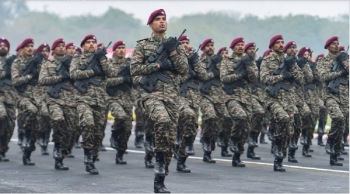 If a British Commander-in-Chief of pre-independence Indian Army were to walk out of his grave, he would find it as “British” as he left it, more ‘British’ than today’s British Army. It is as if the Indian Army is frozen in the time frame of 1947 when the forces were transferred to the Indian (and Pakistani) national governments.

The reasons for this are several. Almost all colonial struggles for independence were violent armed conflict. Only India opted for Gandhiji’s Ahimsa and Satyagraha. Therefore, the mainstream independence movement constituted passive resistance, ‘injure ourselves’ rather than the oppressors. The freedom fighters confronted bullets, lathis and imprisonment. But the British administers were not wounded, at least bodily. Of course, many times, their conscience was injured; but then, that was what Satyagraha was all about.

It is a fact that apart from the non-violent stream, there were militant and subversive patriotic groups who attacked the empire. The British dealt with them mercilessly and the armed forces and the police were let loose on them. They were shot dead, those who were caught alive were hanged, and their near ones were tortured and terrorized. This was a field in which the British could cope with more easily than with the non-violent freedom fighters.

Normally, the national liberation movements of colonial countries had an influence on the native armies. But in India, the Army was left alone by the non-violent as well as the violent streams of the freedom struggle. The British, chastened by the 1857 mutiny, did their best to alienate the Army from the civil. The troops were quarantined in cantonments, their interaction with the civil population was strictly restricted and the spirit of caste, religion and region was promoted to undermine the patriotic sentiments of the soldiers. As such, the national movements had very little effect on the armed forces till the World War II.

During the war, the Indian armed forces saw tremendous expansion. The British authorities could no more be choosy in having recruits for the forces. A large number of middle class youth had to be inducted into the technical wing of the Army, Navy and Air Force.

The experience of the Indian troops who fought in the theatres of war in Europe and other parts of the world helped to widen their vision and inspire their patriotic sentiments. The joining of Soviet Russia with the Allies against the Nazi-Fascist Axis turned the imperialist war into a ‘peoples war’ for the communists all over the world. This removed the stigma of supporting the British in the war effort for a considerable section of the Indian political left. But they turned against the British when the war was over. They came out in open support of the national movement and against the racial discrimination by their British officers as happened in the Royal Indian Navy (RIN) mutiny and revolts in Air Force units.

The Indian National Army (INA) too caused the breakdown of army men’s colonial mindset. Thousands of Indian soldiers captured by the Japanese on the Eastern front joined the INA to fight the British. Of course, these men had to surrender to the British when the Japanese were routed from Burma, Singapore and Malaya. But the defeat did not tarnish the image of INA; instead, they became the symbol of patriotism and national unity. The trial of INA officers by the tottering British regime in India became the rallying point for the national upsurge in 1945-46, in which the armed forces too took part.

All these show that, when India became independent, there were two streams in the armed forces – the mainstream military machine that the British handed over to the governments of India and Pakistan and the amalgam of rebels who took part overtly or covertly in the freedom struggle who were dismissed by the British. Naturally the two segments were antagonistic to each other.

No doubt, the national leaders who inherited power from the British had a soft corner in their hearts for those in the armed forces who had rebelled against the British and strengthened the freedom struggle. At least Jawaharlal Nehru, who became first Prime Minister, had justified the patriotic actions of the members of the armed forces. During the RIN revolt, Nehru said: “Our armed forces have every right to revolt against foreign ruler in order to achieve the freedom of the country. The C-in-C in his broadcast has said that he will not countenance any political intrigue in the armed forces and that discipline is the essential thing. I do believe in what he says. But that army should be a free army of a free country. Our boys cannot divorce politics and work as mere automatons of the foreign government.

Our army, in my opinion, should be fully politically conscious, because besides being soldiers, they had to be the citizens of the country, they have to discharge that duty to the people. I have all sympathy for the RIN boys.”

Nehru had the clear vision of what free India’s government should do to the freedom fighters of armed forces. He said the INA had fought well and he would use his good offices to reinstate them and place them in the correct order of seniority. India now required a national army with national outlook and hinted that Mohan Singh might become the C-in-C. Captain Mohan Singh of the Punjab Regiment was the organizer of the Indian National Army and became the General of the INA.

However, Nehru’s vision was never fulfilled even though he remained Prime Minister for long 17 years. The reason was the Indian officers of the Army and the Navy resisted the freedom fighters of the armed forces in free India’s forces and the British C-in-C who continued to command the Indian Army supported their resistance.

The King’s Commissioned Indian Officers (KCIOs) who surfaced to the top when hundreds of British officers left the country in 1947 were panicky that INA officers may usurp them from top posts when the British officers left. However, the exigencies of the post-independence developments and the Pak invasion of Kashmir, made the political leaders totally dependent on the then existing Indian officers. The senior officers, who were catapulted from colonels to generals, ensured that the freedom fighters of the forces never rejoined the armed forces of free India. They made rules that blacklisted the INA personnel and Naval mutineers and all servicemen dismissed by the British as undesirable. The politicians in power, who were themselves freedom fighters, ditched their colleagues in uniform when they made ICS and KCIOs as trustees of the administration of the country.

The civil-military bureaucracy in India prevailed upon the politicians in power to keep the Army in its colonial character on the excuse of keeping it apolitical. Communal regiments, devised by the British for their ‘divide and rule’ policy, still continue. It is caste and ethnic traditions rather than patriotism that motivate the Indian soldiers. The excuse for not effecting any radical changes has been that the system is time tested.

What path the Indian authorities should have taken to make Indian Army to come out of the colonial groove and would the Modi Government’s Agnipath be the right path for the change? This can be discussed in another article.

(The writer is a journalist, and an ex-serviceman, who had served both in the British Indian and independent India’s Army)