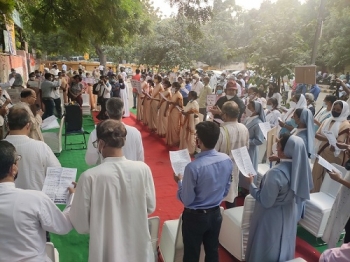 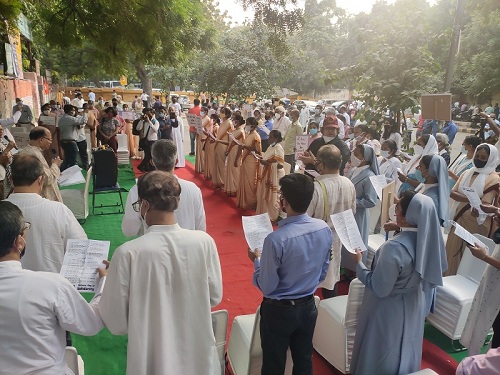 The Catholic Church in India expressed its ‘deep sorrow and anguish’ at the arrest and imprisonment of Fr. Stan Swamy and it demanded his immediate release. The statement recalled the work of Fr. Stan Swami for decades to protect the rights of the tribals of Jharkhand.

The CBCI, Kerala Bishops’ Conference, the Jesuits and some other religious congregations also appealed to the authorities to release Fr. Stan Swamy. Besides Stan Swamy, 15 activists, lawyers and academics are jailed in connection with the violence that broke out in Bhima Koregaon on January 1, 2018.

Some of them are in Jail for more than two years. As advocate Vrinda Grover termed, the case against the activists is ‘criminalization of dissent’, as those arrested had raised their voice on various issues. Stan Swamy has never gone to Bhima Koregoan and he has nothing to do with this case. The government is annoyed with him for exposing the human rights violations of the tribals in Jharkhand and has used the Bhima Koregoan issue to fix him.
Forum for Justice and Peace held its national convention in Ranchi in February 2018 on the theme, ‘Challenges to Secular Democracy in India Today’ and Fr. Stan Swamy was one of the speakers and he spoke on the topic “Possible Response by the Church and the Religious Groups”.

In his speech he shared with the participants the opposition, threats and the harassment he and his colleagues were facing from the then BJP state government. It is pertinent to recall some of the points raised by Fr. Stan in his address to the consecrated women and men.

Local church’s top functionaries had openly told him that the Church would not be part of any people’s movements’ especially, if they question the powers that be. A consolation prize the Church and Religious groups offered was that they allowed a few individual clergy and religious to participate in people’s movements and people’s organizations, but always with a caution that they don’t become too radical or ‘political’ in their involvements.
Fr. Stan had warned that the institutions of the Church would increasingly become millstones around the neck of the Church. He appealed to the Church and the religious congregations to de-institutionalize the institutions by opening them up to people’s movements and offering them logistical support in their actions. He also told them to actively participate/become members of Human Rights Networks. The communities and residences of the Religious should become “open houses” for the people in the neighbourhood, especially the poor and activists involved in taking up justice issues.

Above all, he appealed to the consecrated women and men to evolve a spirituality based on the on ‘Jesus of Nazareth and not on Jesus of the Christians’. “The historical Jesus of Nazareth was a revolutionary whereas the Jesus of the Christians has been deified and imprisoned inside our churches and tabernacles”. Fr. Stan started his speech with a quotation of Bishop Desmond Tutu. If you are neutral in situations of injustice, you have chosen the side of the oppressor.

Fr. Stan took the side of the victims of injustice. His efforts to organize the tribals against their land alienation and displacement and to free about 3000 tribal youth who are falsely implicated in criminal cases and languishing in jails made the government angry and as a result he is linked with the Maoists. Before his arrest Fr. Stan had said in a statement, “During the past three decades I have tried to identify myself with the Adivasi people and their struggle for a life of dignity and self-respect. As a writer, I have tried to analyze the different issues they are faced with. In this process I have clearly expressed dissent with several policies, laws enacted by the government in the light of the Constitution. I have questioned the validity, legality, justness of several steps taken by the government and the ruling class.” While speaking at a protest meeting in Delhi on 13th October Professor Apoorvanand said Fr. Stan was continuing the work of Jesus, i.e. fighting against injustice which is the ‘most sacred task’.

It is heartening to note that a good number of consecrated women and men participated in the protests against the illegal arrest and imprisonment of Fr. Stan in different parts of India. ex

Political dissent is treated as a crime. All those who criticize the government and the ruling party or having dissenting views are branded as anti-nationals and they are put behind the bars under the draconian laws like Sedition Law, National Security Act, UAPA and Public Safety Act. From terrorism to dacoity, all kinds of charges are being made on them. A good doctor in Uttar Pradesh, Kafeel Khan, was in jail for many months because he dared to speak against the Home Minister of India in the context of the Citizenship (Amendment) Act (CAA). The 16 activists, lawyers and academics are put behind the bars linking them with Bhima Koregoan violence because of their dissent.

The investigation agencies like CBI, NIA, NCB, ED, Income Tax Department etc. are being misused and abused by the government to target and persecute the opposition party leaders, critics and human rights activists.

NGOs and Civil Society Organizations are being harassed through filing false cases against them.  The latest amendments to the Foreign Contribution Regulation Act are one of the means adopted by the Central government for paralysing the NGOs.

Consecrated women and men, who have left everything for the sake of the mission of Jesus of empowering the people of God, have a greater responsibility at this crucial juncture to make the people aware of what is happening in the country and to motivate them to respond effectively. The far and wide support and ex

As many consecrated women and men came to the streets and participated in the protests against the arrest and imprisonment of Fr. Stan, they have to do the same whenever the human rights are violated and injustice is done to any citizen or any group of people. It is to be appreciated that a good number of women religious in North India took part in the protests against the gang rape in Hathras, UP. Let the whole world see their prophetic action of standing up and speaking out against the politics of oppression, division, exclusion and hatred and religious nationalism.