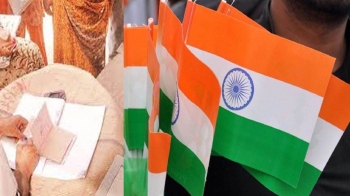 The Amrit Mahotsav is over. This 15th August I had to hoist the flag at one event and arrange for it at another. At both events I spoke on the “Har Ghar Tiranga” (The Tricolour in Every home) campaign.

My first thoughts went back to 2020 when Prime Minister Narendra Modi asked us to ring bells and gongs, in the superstitious belief that they would drive Corona away! I see this flag campaign in the same light; as a major diversionary tactic, with the added benefit of whipping up nationalistic fervour (read votes).

My next thought was that the Mahotsav (mega event) is now over, but what about the Amrit (life-giving nectar) part? I don’t see any new life being breathed into the nation with this flag waving hysteria. I did hear some raucous rallies in my neighbourhood that sounded more like street brawls. Ironically, we didn’t have electricity for long periods on the 15th.

What about the Tiranga (tricolour)? I read an article by Brinda Karat, quoting the deliberations of the Constituent Assembly in June 1947. It is commonly believed that the saffron in the flag symbolises Hinduism, the green is for Islam and the white for all those in between.

But the founding fathers chose to steer clear of this religious symbolism. They stated that the saffron stood for the sacrifice that ascetics made to renounce the world. In the political context it symbolised the many sacrifices of our freedom fighters. The white stood for peace among all peoples, and the green was our respect for nature and mother earth. The vision of our founding fathers needs to be echoed even louder today.

Firstly, where is the element of sacrifice in today’s public life? Most politicians and elected representatives are more concerned with self-aggrandisement than with self-sacrifice. For selfish motives they will switch parties at the drop of a hat or a call from the ED. Ideology be damned.

What of peace? We seem to be promoting more of hatred towards the “other”. Most shameful was the introduction of “Partition Horrors Day” on the 14th August. When I visited Jerusalem in 1980 I was shown the museum of horrors. Jewish children are taken there to remind them of the horrors that their forefathers underwent at the hands of the Nazis and perhaps the “Christians”. Young minds were being brainwashed to hate. Does the land of the Mahatma now want to build on a foundation of religious hatred?

Recent events in neighbouring Sri Lanka and Pakistan are stark reminders that religious hatred works to a point. After that it becomes counter-productive. Hate mongering has grown in India ever since the BJP came to power in 2014. The latest news is that some Hindu seers have prepared a new constitution for a Hindu Rashtra. They also talk of Akhand Bharat (Undivided India). That includes Pakistan and Bangladesh. I have two simple questions.

Can India forcefully gain control of these two large neighbours? Hypothetically, even if we did, would it not change the country’s demographic profile? In that changed scenario would the BJP be able to come to power at the Centre? Would it be possible for Narendra Modi to become Prime Minister? By talking of Akhand Bharat is the BJP not digging its own grave?

What would be the fate of religious minorities in a Hindu Rashtra? Will 18% minorities be evicted from the country? If Pakistan and Bangladesh are part of Greater India then where will these “unwanted” minorities be despatched to? And what would happen at the next Commonwealth Games (CWG)? Why such a mundane question?

I studied the results of the CWG 2022 at Birmingham. Our media savvy Prime Minister feted the medal winners as though it was the first time India won medals at an international event. Let us examine the results.

In 2022 we are tom-tomming 61 medals, including 22 Gold. But in CWG 2010 in Delhi we won 101 medals, including 38 Gold. To be fair, that tally included 30 medals in shooting that was not there in 2022. Also remember how some TV channels and anchors went to town criticising the organization of CWG 2010. It contributed in large measure to the downfall of Sheila Dixit, the Delhi Chief Minister, and later that of the Manmohan Singh government. Whatever happened to the so-called CWG 2010 scam?

Back to 2022. We won 61 medals. Of these, 49 came from individual events, while 12 came from team events. Some teams, like hockey, had 18 members each, so the total number of medallists in team events was 83. Together with 49 individual medals this comes to 132 medallists.

Of these at least 26, or 20%, were from the minority communities – Sikh, Christian and Muslim (see Table). Muslims are easily identifiable from their names. Not so Sikhs and Christians. For example, the Men’s Hockey team had 8 players with the surname Singh.

However, just 4 had first names like Harmanpreet, synonymous with Sikhs.

Christians with names like Jeremy, Paul, Grace and Treesa were easy to identify. I was watching the squash singles bronze medal match. The winner, Saurabh Ghoshal, was wearing a cross, so I presumed that he was Christian. Later I saw the squash mixed doubles bronze medal match. Ghoshal was partnering Dipika Pallikal, who was also wearing a cross. I was aware that she was Christian. The commentator announced that Saurabh is married to Dipika’s sister, thereby confirming for me that both were Christian. I would not have highlighted this, but for countering the Hindu Rashtra narrative.

There was a disturbing aside to CWG 2022. I had read that the Chief of Army Staff had felicitated the 8 medal winners from the army. 8 out of 132 is just 6%, nothing to boast about. Has the importance given to sports gone down in the army? Earlier the Army and Railways were the breeding grounds for Indian sportspersons.

Over to green. How much do we care for the environment? The first act of the newly manipulated (not elected) BJP Government in Maharashtra was to fell trees in the Aarey forest, the lung of Mumbai. The Central Government has gone ahead with road widening for the Char Dham Yatra in Uttarakhand, triggering landslides and dam bursts.

What of the common man? Single use plastics were totally banned w.e.f. 1st July 2022. Far a few days, fearing checking, they disappeared. We are now back to “normal”. How many of us carry our own shopping bags? We don’t hesitate to use disposable plastic and Styrofoam even in our church functions. How many trees have we planted? Do we convert our biodegradable domestic garbage into compost? Crackers are banned but we continue to burst them. Just before Eid loudspeakers were banned in U.P. But every temple and jagran is still using them. 30 million kanwarias left piles of garbage in Haridwar recently.

Desh bhakti (patriotism) cannot be worn on one’s sleeve, by flag-waving or chanting Vande Mataram. True patriotism is inculcating the message of the tricolour – sacrifice, peace and respect, into our everyday lives – individual, social, religious or political. Only then will we be able to taste the Amrit. Else the Mahotsav will have ended with the flag-waving, as earlier with the bell-ringing.