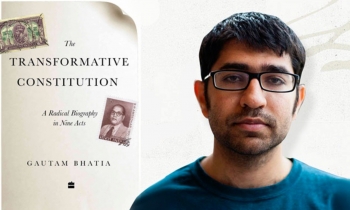 As we celebrate the Constitution Day on November 26 to mark the adoption of the Constitution of India on this day in 1949, it is another opportunity to reflect on the status of the Statute today, not so much our commitment to it but the departures from its vision, ideals and values.

Are we in sync with the original version and vision of ‘equality, fraternity and justice for all’ or are we drifting away from it? Given the increasing frequency of attacks on the minorities on what they wear and eat, how they pray and dress, isn’t it fair to say that we are departing from the vision of the Constitution. This is most visible in the utter neglect and marginalization of some communities (read Muslims and Christians) on one hand and the conspicuous attempts to promote and prioritize the ‘care and comfort’ of one community on the other hand.

In a recent lecture at the Bangalore International Centre, a well-known lawyer and writer Gautam Bhatia said that the ‘Constitutions by their very nature have a story to tell and when we look at the Indian Constitution there are at least three stories that stand out.’

According to him, the three stories that stand out in the Indian Constitution are: a) story of continuity (from the colonial rule to the independent era); b) story of transformation (breaking away, both politically and socially, from the colonial era); and c) story of compromise (to satisfy many competing interests).

While it is difficult to disagree with these stories as features of India’s Constitution, one might like to merge them into one and consider the main story of Indian Constitution as one of ‘unity in diversity.’ This is independent India’s original story, and the ‘original story’ of our Constitution. Unfortunately, this original story has been muddied and is under constant attack with a lot of fake stories. This is orchestrated ostensibly with the embrace of ‘unity’ and the neglect of the ‘diversity.’

The fake stories dominate the discourse today. They are fake stories because they do not represent the original story, and are far removed from its vision and values. In other words, their fake character stems from their constitutional departures. We witness today in more ways than one, the departures from the original story, with attempts to reduce everything to homogeneity -- one religion, one language, one ration, one diet and so on. This is the reality under the New India promised by the BJP dispensation.

During the COVID-19, it was evident from curtailing the powers of the states for the procurement of testing kits, vaccines, the use of Disaster Management Act and the unplanned lockdown.

The Union-State relations have also been damaged with the introduction of policies like the farm laws (now withdrawn due to protests by the farmers), Banking Regulation (Amendment) Act 2020, Dam Safety Bill 2019, National Education Policy 2020, Government of National Capital Territory Amendment Act, 2021, Indian Marine Fisheries Bill 2021, The Electricity (Amendment) Bill 2022, imposition of Hindi and the most recent incident of dropping of ‘Centre-state Relations’ from the agenda of the Parliamentary Committee for Home meetings.

These are only a few examples that show where the centre-state relations stand today and the priority (or the lack of it) that is given to it. It reflects a complete departure from the constitutional mandate, or the spirit of ‘unity in diversity’ and thus widening and deepening the damages to an important constitutional vision of federal structure. Ironically, it was Narendra Modi during his tenure as the Chief Minister of Gujarat who ridiculed the Centre under Prime Minister Manmohan Singh for not practicing cooperative federalism.

As we celebrate the ‘Constitution Day’ it is everyone’s duty to speak and spread this original story of our Constitution and make concrete efforts to reclaim it. The Bharat Jodo Yatra is one such attempt to return to and reclaim the original story. The huge numbers that join this yatra show that there are a lot of people who are tired of fake stories and want to repair the broken system and want to reclaim the original story. While this may be a good beginning, there is a need for more of these efforts to restore and repair the damage done to the Constitution and thus reimagine and build the #NewIndia predicated on the spirit of ‘unity in diversity’.