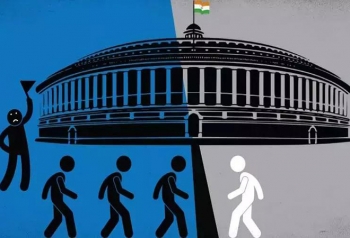 Not just me, but most of the world is astonished as our elected representatives switch sides!

Logically, how can they do this?

They’ve been elected by voters voting for a particular party and its ideology, and the representative is the collective voice of those same people, and cannot have an identity of his own, except that of the voters he represents, then how is he or she allowed to get away?

It’s like wagging a dog’s tail. A dog wags its tail when happy, right? So, the tail is reflective of the dog’s mood. Now when the tail decides to act on its own, it is no more reflecting the mood of the dog, but just the tail itself, which makes it no more useful to the dog, which in this case, is we the voters.

Or let’s take the example of a game of hockey or football. As the game progresses and the crowd watches with frenzy, the referee suddenly blows his whistle seeing a confusing muddle of players in the middle, “What’s the problem?” he shouts angrily as a group of players shuffle past him and walk to the opposing half of the field.

“We have decided to join the other side!” they say even as the other side cheers wildly and welcomes them to their midst even appointing one of them as a deputy captain.

At first the spectators look puzzled at the goings on and at the two or three players who still remain on the side they are supposed to be.

But the next moment there is a giant roar as angry men and women rush onto the field, and with raised fists beat up the players who have switched sides.

This has never happened in a game, but I’m sure if it ever did, this would be the end result. Not only would they beat the players who have crossed over, but also the ones on the other side who spoiled the game by luring them over.

Because that’s not sport, even as what is happening today is not democracy.

It’s wrong, and the only difference here is that unlike the spectators in the stadium, we don’t rush in and beat the ‘switchoverists’!

Knowing the wishy-washy nature of our representatives, the anti-defection law was made but even that is being skillfully bypassed.

There’s only one way out, and that is, that as soon as an elected representative decides to switch sides he resigns from his post or is disqualified. Then he isn’t a spokesman of his people anymore. Not a dog’s tail wagging itself.

Till this happens and such a law for immediate disqualification is passed, these ‘crossovers’ and ‘switchoverists’ represent only themselves and that my dear people of India is not democracy, but some game of football or is it hockey, the world, our referee is extremely puzzled about..!