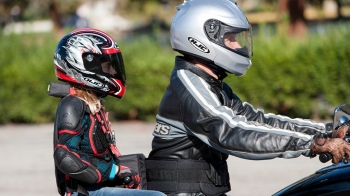 This morning as I looked out of my window, I saw a scooterist skidding. No pleasant sight as the bike rattled like a helpless animal and the rider fell heavily to the ground. Luckily, he was wearing a helmet, but the box he was carrying in the rear flew in the air, and burst open as it hit the ground.

Horror stricken, I wondered, had it been a pillion rider, what could have happened?

Two months ago, the Maharashtra government decided to enforce the rule that it was mandatory for a pillion to wear a helmet. This month, with a new government and a new police chief, they’ve decided to go ‘slow’ on the rule.

“It’s quite a nuisance” it was quoted, “To carry two helmets!”

I could write a couple of columns on the ‘nuisance’ value of two helmets, compared to looking at a dead or braindead pillion, but I won’t today. Instead, what struck me, was that thousands of riders in the city insisted their pillions started wearing helmets, when the rule was being enforced, not because they suddenly started caring for the person behind, but afraid of the policemen.

Only fear of the law, makes us observe safety measures in our country.

Only fear of getting caught makes us obey rules.

Once, while in Austria, everybody in the restaurant I was dining in, ran out. I was puzzled, and thinking something catastrophic had happened, sauntered outside to find people shaking their heads and walking back in, “What happened?” I asked, seeing no signs of an accident.

“A motorist blew his horn!” said my companion.

They had all run out because someone had done the unheard, of ‘blowing his horn’.

In a polite society that was a rude gesture, and something that called for instant disapproval, which they had shown to the driver with their frowns.

I’ve seen this politeness at junctions abroad, while driving on highways and almost everywhere; a politeness that transcends rules, that comes out of a simple thought, that of ‘consideration for the other person!’

We don’t seem to have much of such thinking here. We have loudspeakers that go on, even after the ten- o- clock deadline, and stop only after someone complains and if and when the police arrive! Do we ever think about elders and children spending a disturbed and sleepless night because of that loud sound?

Only when the rider values the head of his or her pillion, only when we do things because we are concerned about others, will we change for the better in our country.

Many years ago, a spiritual leader went about saying, there were only two laws worth following, one about loving God, and the other, “Love thy neighbour as thyself!”

“Rider! Look at your immediate neighbour, riding pillion, and in love, get that second helmet..!”