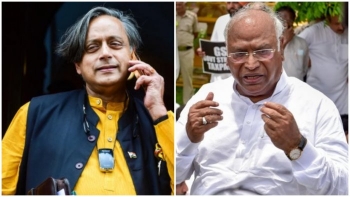 As I hear that Mallikarjun Kharge wants no debate with Shashi Tharoor, for the Congress president elections, I wonder how any candidate can be elected without hearing him speak?

‘’Sir, why are you afraid of debates?”

“I don’t want one, because I’ve already been blessed!”

“By the powers that be!”

“The only power that matters in the party!”

“Well if the party represents people’s power then we need to hear what you have in store for the people sir!”

“But Mr President in the Running, we are the people that matter, we want a debate, and may the best man win! Now will you go ahead and have that talk please?”

“But I cannot speak as well as him!”

“What?”
“Sir, in a debate, it is not just how you speak but what you speak, and that is what we want to hear. What change do you have for the people of India?”

“The powers that matter!”

“But you are the only power that matters Mr Kharge, nobody else in the party except you, once you take over, and are elected!”

“Sssshhh, don’t say that so loudly, you may be heard!”

“I hope I am! We are fed up with having proxy leaders in this country, and when a real man stands up and refuses your suggestion of a consensus, we want to hear what he has to offer!”

“That is not how it works. Here, I am a humble worker, who works according to what I am instructed to do! I listen to orders!”

“The instructions you need to listen to sir, are the instructions of the people, and today the only orders they are giving is to hear what you have to offer. Can you hear the people? Voices clamouring to accept a debate?”

“Yes, I can hear voices, but only that of a mother and son, telling me I’ve already won!”

“Come here and let this man, a simple ear cleaner from Chowpatty beach, clean your ears, so you can hear us the people!”
“No, no, I can’t do that! The only two voices I need to hear are ‘they, the two’!”

And again, we the people are fooled, with a president, whose voice, whose ideas, whose individuality will, I’m beginning to feel never be known. However, I salute one man who had the courage to throw in his hat and say, ‘Let’s debate!”

Let’s give him our vote, if not for voice, for courage..!