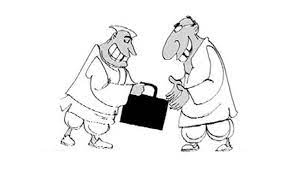 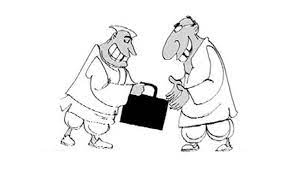 A trend that’s becoming common as political defections take place is for elected representatives to flee their state in hordes and hole themselves up in hotels in far corners of the country, where bereft of any means of communication, they keep themselves occupied in pleasurable activities that include everything except what they have been elected to do, which is to represent the party which their voters voted for.

“We need to build special hotels for our esteemed defecting representatives!” smiled the chairman of the hotel’s association, “hotels that are built to look after their special needs and also cater to what the defecting situation demands!”

“What exactly do you have in mind?” asked the secretary of the hotel’s association.

“First of all, a giant swimming pool!” said the chairman.

“This is a pool just for reflection!” said the chairman.

“Where they can see their reflection?” asked the secretary mischievously.

“You can say that again,” said the chairman, “A pool where they can both see themselves in their new party colours and also reflect on how they will spend all the money they’ve suddenly come into! It’s easy to make money but difficult to spend it wisely, and such a pool will help them solve these financial realities!”

“What about swimming pool chats?” asked the secretary, “We employ permanent Swiss language instructors who teach them what to say when they visit Switzerland! The Swiss have strange words when it comes to ‘fixed deposit’ or ‘secret account’!”

“Excellent!” said the chairman, “Also we need to throw out our chefs and culinary experts!”

“Who will cook?” asked the puzzled secretary.

“As soon as they defect, we pay passage and offer attractive packages to their mothers and wives who we put up in an adjacent hotel, and who will cook for them, so they will not miss their homes. I have seen so many of them looking into the distance as they eat!”

“Missing their wives and mothers?”

“No, only their cooking!” said the wise chairman, “that is why we need to have them nearby but not next to them so they can enjoy their defectors freedom completely! Remember there’s always the chance their spouses will make them see reason and get them back to their old party!”

“Makes sense!” said the secretary happily, “Cooked food, but not the cooks! We are really on the way to create an excellent prototype of a hotel that will earn our members huge incomes!”

The chairman’s phone rang, and he frowned as he listened, then looked sadly at his secretary, “Bad news for us!” he whispered, “There’s a rumour the government has decided to build these hotels themselves, so the income generated can be put back into the same activities! It’s now a public sector enterprise..!”