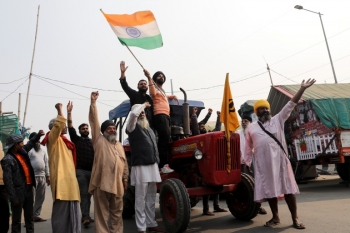 And as I hear that the Prime Minister has repealed the three farm laws, I move into the future and hear people, especially the new historians of our country saying, ‘There was never any farmer protests!”
‘Ofcourse there was!” I shout, “Through days of bitter cold and other days of sweltering heat for over a year they protested outside the gates of the capital.
“That’s what we have been misled to believe!” the new historians say patiently, “But actually, the prime minister in his wisdom, looking closely at the laws felt they were unjust and in an overnight decision, surgically struck them down!”
“But there was an episode! Jeeps laden with men even one carrying a minister’s son mowed down some of the farmers!”
“You believe that?”
“I saw a video of the same, it was horrible!” I shout.
“Videos doctored like the so-called American moon landing!” cry the new historians, “Or doctored like the fake gas chambers of Auschwitz! We are here to set history right. Please understand there were never any farmer protests!”
And even as you chuckle at this absurd scenario and tell me to write my science fiction or fictitious make-believe tales elsewhere, ponder with me for a moment, “Isn’t this what is being repeated about our freedom movement?
“There was no freedom movement! The British, were so happy we fought side by side with them during the world war, they rewarded us with freedom!”
“What about Gandhiji, Nehru and the freedom struggle? Non-violence and satyagraha?”
“All political, so that a particular party could win the elections after we were handed freedom on a platter! Finally the people got fed with all this drama, and a bold man took a toy gun and said plop, plop near the old freedom fighter and the poor man just fainted and didn’t come out of it!”
And that is most nearly how our present historians are speaking, even deciding to erect a statue in honour of the man whose bullets went, ‘plop, plop’ into our beloved Mahatma!”
Did the farmer struggle take place? Yes, it did. Did they win, after struggling for more than a year? Yes, they did. Then we need to tell our children this. Not just write it down, because afterwards our writing will be called, ‘one sided or fake’ but chronicle it through videos and other means.
After the World War, General Eisenhower on visiting Auschwitz said, “I visited every nook and cranny of the camp because I felt it my duty to be in a position from then on to testify at first hand, about these things, in case there ever grew up at home the belief or assumption that `the stories of Nazi brutality were just propaganda.’
The farmers struggled. They won. India struggled. India won her freedom. That is the truth, and remember to keep repeating it, lest it be lied about later as propaganda..!