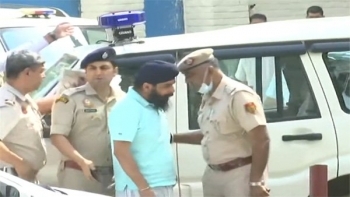 Somewhere in the US, arms manufacturers seemed to be throwing a party. There was the firing of cannon, rifle and pistol shots coming from their estates. The local police were baffled and rode over to see what the commotion was all about, “Good evening,” said the sheriff respectfully as he got off his car and went over to the billionaire’s huge gates where an armed guard stood, “There’s a lot of shooting and firing, hope all’s well!”
“Couldn’t be better!” said the guard, “We are so happy, and I’ve even got a bonus!”
“I guess that’s because of the Russian-Ukraine gun sales right? You guys are raking in the moolah!”
“Nah, that’s chicken feed. We’ve got some big orders come in!”
“From where?” asked the sheriff.
“From India!”
“They going to war with China?” asked the sheriff uneasily.
“Nah, the order’s not from the Indian government but from all the states!”
“You joking?” asked the sheriff, “Who they fighting with?”
“With each other,” said the guard chuckling, “Police from one state have started going to another. One lot arrests a person, the other de-arrests the same person. One captures him, the other sets him free!”
“Ye gads!” cried the sheriff, “this is terrible, this could lead to civil war!”
“Which is why we are going into high speed manufacturing!” said the guard gleefully.
“But…” said the sheriff, who knew a thing or two about guns, “How will all this still make them purchase guns in such huge quantities? I mean the kind of celebration that’s going on, it looks like the whole population in the sub-continent will want to arm themselves?”
“That is what we envisage!” said the guard gleefully, “Today, it’s state police against state police, soon it will be one police station against another!”
“You mean if someone is arrested in one police station, the police across the road will come to set him or her free?”
“Yes,” said the guard at the gate of the mansion belonging to the arms manufacturer, “We know it will lead to that and then bigger buying as the ultimate happens!”
“And what is that?” asked the sheriff.
“The people of the country seeing their cops occupied in fighting each other will soon realise they have no one to keep them secure but their own true selves and will start buying arms…”
“In hordes!” completed the sheriff.
“And do you know something sheriff?”
“What?” asked the sheriff.
“Most of the sounds you think are coming from inside our estate, are not coming from here. They are coming from India; between the Assam police and Tripura, Delhi police and Punjab and UP, and sporadic shots between Maharashtra local police and the Centre’s CBI! Our billionaires have gone to sleep, they just provide the means for others to have fun..!”