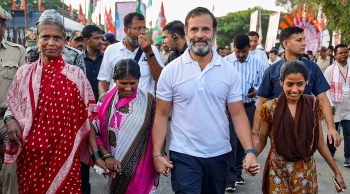 As Rahul carries on his long trek through our vast country, there’s something happening. This isn’t a walk galvanizing people to hate their neighbours as most other recent walks have been.

This is a walk, in which we are seeing compassion at work!

Compassion is simply a kind, friendly presence in the face of what’s difficult. Its power is connecting us with what’s difficult—it offers us an approach that differs from the turning away that we usually do, and that’s what is becoming increasingly noticeable in Rahul’s strides through India.

There’s no turning away from the poor: No, there isn’t as we see in many leaders of today, who have a great disdain for the poor, and are visibly more in love with the rich and influential. But Rahul, he hugs the most insignificant individual, and in the hug we see love, love for the people of India!

Love for the poor!

Love for the human condition!

When we can acknowledge the commonality of the human condition, something beautiful happens: we diminish the subtle cruelty of indifference.

Compassion helps him connect with others, mends relationships, and it seems to be moving him forward while fostering emotional intelligence and well-being. Though he made a statement about a historical freedom fighter that made the Shiv-Sena bristle, still one phone call to Sanjay Raut, smoothened the ruffled feathers as Raut spoke of the compassion Rahul is showing in his ‘great walk’!

His compassion harbors a desire for all people to be free from suffering, and it’s imbued with a desire to help.

It’s going to be a long walk for Rahul, no not this padayatra that he’s doing, but the walk into the hearts of voters, but the impression he makes though it will take long to form, will be deep!

Hate has always lost to love!

Hate wins small battles, but love ultimately wins the war. Another Gandhi, the Father of our Nation, won freedom for our country through a simple method of non-violence. He and India did not react when the British used sticks and guns on them.

All through using the formula of love and compassion!

It’s going to be a long walk for Rahul, but it’s a walk India needs, after being fed on hate for some time now. It’s going to be interesting to watch, because though love will win in the end, hate does take it’s pound of flesh. Will the boy turned man, who India is beginning to love, survive that pound being removed, is what we hope will happen..!