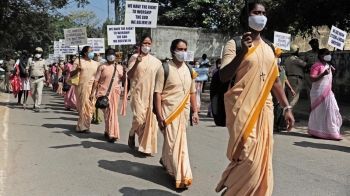 In the island of Lilliput, the people were unhappy; they wanted to change from the gods of their forefathers to another God. “He’s a living God!” they said.

“Well we’ve all been living with the same gods for centuries!” sneered the chief.

“But we would like to try out this new God!” they said.

The chief turned to his aide and asked, “What can we do?”
“File a case they have been forcibly converted!” grinned the aide to the chieftain of Lilliput.

“Forcible conversion!” shouted the judge, “Terrible. This should be stopped!”

“Yes,” nodded the chieftain and his aide, who had not expected an outburst of this magnitude from a learned judge and were overjoyed by the reaction. But they did not expect the poor man who had been converted to speak up.

“Your honour!” said the converted Lilliputian, “Can you tell me why I cannot convert to a God of my choice, when I can elect a chieftain of my choice?”

There was silence in the Lilliputian court, “Because you have been offered bribes to convert!” said the judge bristling with rage.

“Ah your honour, for the last few years, the opposition are joining in hordes the party of the chieftain after being offered astronomical bribes. Have you nothing to say about that?”

“And your honour, may I know what inducement I have been offered?”

“A bag of rice!” roared the judge.

“If, your honour, I can be induced to leave the religion of my Lilliputian forefathers and run to another God for just a bag of rice, then shouldn’t hunger be the issue that should be addressed in this court and not conversion? Especially when the world calls us poor, and we say their measurement methods are wrong? Maybe here’s a measurement method that seems to be gauging right in your sight?”

The judge looked helplessly at the chieftain, who pointed in the direction of the country of Brobdingnag, in the mainland. “Ah yes,” said the judge, “also these conversions can lead to a breach in national security, because Brobdingnag believes in the religion you intend to follow!”

There was a gasp around the court as people wondered whether they’d heard right.

“National security your honour?” asked the poor man from Lilliput, “Are you saying that all those who believe in a God, different from yours, are a security threat? How?”

The judge looked again at where the chieftain and his aide were standing, but found they were gone. They had left the court, and outside the aide turned to his chieftain and said, “Don’t you think our judge exceeded his brief?”

The chieftain of Lilliput smiled and said, “Just see that he gets a good position in our leadership after his retirement!”

Somewhere in an English grave, Jonathon Swift grunted as Gulliver laughed at the antics of the little Lilliputian chief..!