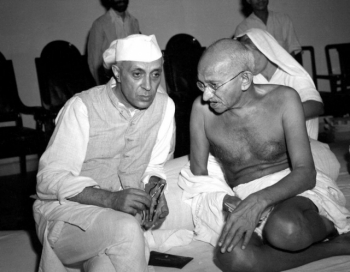 ‘Rebellion!” is the name of the Netflix serial I am watching. Based on incidents just after the First World War when Irish soldiers were used to fight against the Germans, and asked themselves, “Whose war is this? Ours or that of the British?” And then an even bigger question, “Whose freedom are we fighting for? Ours, or that of those who have taken ours away?”
Well, I guess that must have been a question our own soldiers asked as they fought in both the world wars, alongside their British masters, even as we fought for our own freedom. Our leaders like the Irish were jailed, and many were injured. As I watched the movie, and later as I saw the interview Oprah Winfrey had with Megan and Prince Harry, I realized how racist the British were and still are and how important the freedom movement was to us Indians, to be treated as first class citizens of the world!
“I was treated like a beggar and called a half-naked fakir!” laughed a voice close to me.
“With all my Harvard education, even the London cabbie thought he was superior to me!” chuckled another, and I could imagine the red rose on his familiar jacket.
“What a fight you all went through to have won this freedom for us!” I whisper, recognizing the voices from the past.
“Oh, it was worth every bit!” said the Harvard educated voice, “What a moment it was when I spoke that August night and said, ‘at the stroke of midnight when the world sleeps, India will awake to life and freedom!’
“I remember your speech Jawahar!” said the other voice, “I remember thinking, ‘My India is free!’”
“And then!” thundered the voice of the man who had been our Prime Minister for well nigh twenty years, “we saw this report!”
I trembled as I heard the change in tone, “What report?” I asked.
“This Freedom House one, that says, “India is only partly free!”
“Partly free!” shouted, what should have been a feeble voice, but suddenly, there was anger in his tone, “Partly free?”
“You mean, we were nearly killed by those ‘nose in the air’, ‘stiff upper lip’ blighters to make our country ‘partly free?’
“How dare this happen?” asked what should have been a feeble voice, but now anger making it as strong as when it faced the wrath of Churchill. “How dare you let freedom slip away?”
I turn back sadly to my Netflix serial, and see the Irish anger as after a hard-fought freedom movement they are fooled into a partly free provincial government and the look of disbelief on the face of the pretty heroine as she shouts, “We have been betrayed!”
“Yes, we have!” shout the two voices near me, one heavily Harvard accented and the other feeble, as I hear aloud, an assassin’s bullet piercing his chest again..!”