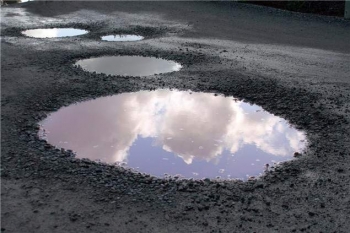 A cry I’m finding across our country, from frustrated citizens is, “Repair the potholes!” Along with this pathetic plea, comes the proud shout, “Make in India!” As from our rooftops and in WhatsApp groups we applaud national leaders spending precious time and tax payers money going from country to country wooing their industrialists to open factories, offices and make huge investments in our country.

What they find when they do arrive are narrow, pothole filled roads, filthy streets lined with un-lifted garbage, sprawling slums and pollution.

“Is there some sinister master plan you are following?” I asked a spokesman from the government,

“How is it you call these foreign companies, then give them such terrible facilities?”

“For their own good my friend, for their own good!” said the smiling spokesman who seemed to be all ready to go somewhere with his bags in tow, “We want to toughen these investors in our country!”

“By giving them filth, rubbish and potholes?”

“It worked for you and me didn’t it? Did you grow up in hygienic conditions and sanitized settings?”

“Told me what?” I asked, confused.

“It was the pot holes and dirt that shaped you!”

“It toughened you. You don’t go about with a hanky to your nose like those Americans and Germans and Britishers. You don’t get sick when you drink tap water and pick up a cough from vehicle fumes! See you even have dirt on the seat of your pants.”

“That’s because I slipped on some muck outside.”

“You are a tough Indian, because of the very muck you slipped on today. Now do you understand?”

“That the muck, the pot holes and dirt shaped me?”

“Yes! And we want to do the same to these white collared, suited booted men and women in their swanky designer outfits, Mercedes Benzes and Cadillacs.”

“You want to give them dirt and grime?”

“To make them world beaters like we Indians are. Guess what happens when their fancy cars hit the first pothole? They get a broken shoulder, ha, ha, ha.”

“They then fly off to Shanghai or Hong Kong and open their companies there.”

“No, they are the weak. We are looking for those who can fight our hurdles and obstacles and come out winners. We want to make men out of boys. Legends out of heroes! We want the world to think of our country as a ‘strength and character building’ destination! We have plans for other exercises!”

“Let’s go farther, no roads at all! No dustbins. Just garbage all over. No buildings, only slums!”

“Aha, our master plan is at work. Goodbye!”

“Where are you going?” I asked.

“Abroad,” smiled the spokesman, “to woo those weak foreign investors to come here and toughen up..!”