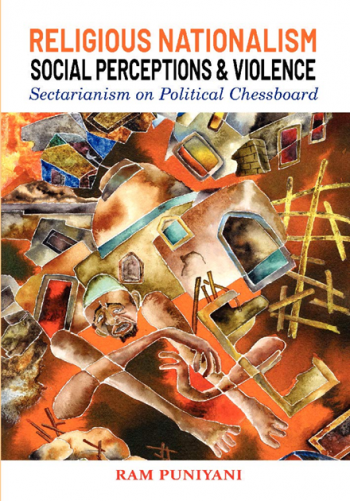 Ram Puniyani, the campaigner for communal harmony and peace, has come out with a new book ‘Religious Nationalism – Social Perceptions and Violence: Sectarianism on Political Chessboard’ (Media House 2020, Delhi, Price Rs 495/-) which adds another dimension to the on-going debate on religious nationalism and the efforts to marginalize minorities.

As the author puts it, the book is ‘an attempt to look at the divisive politics, and its role in creating social common sense, demonisation of minorities and agenda of religious nationalism… The overt part of the agenda is to marginalise the religious minorities; at a deeper level, the victims of this agenda are dalits, women and Adivasis as well.’ (P 36) Underlining the accompaniment of the divisive politics with corporate agenda of exploitation, loot and plunder, the ‘Introduction’ makes it clear that it will focus mainly on the ‘social aspects of the politics.’

The first chapter unpacks the social common sense which it sees as a ‘set of ideas which majority in the society comes to believe’ (P. 41) as true, but need not be true. Beginning with medieval times, it traverses through the anti-colonial period to find out the shaping of social ideas in India. The colonial rule played a key role in the ‘introduction of communal historiography’ (P. 45) which was facilitated by the ‘process of homogenisation’ where ‘whole religious community is painted in the same brush’. It further discusses how with the ‘rise of the freedom movement’ three versions of nationalism came into existence, ‘Indian Nationalism, Muslim Nationalism and Hindu Nationalism’ which also gave rise to three versions of history.

The next three chapters focus on Ancient India which discusses Origin of Aryas, Caste System and Roots of Science; Medieval Indian Kingdoms and how a Shared Heritage emerged during these tumultuous developments.

The chapter on Ancient India makes a revelation which has not been reported widely. It tells how Modi government has appointed a committee to ‘put a seal on this “Hindu first” version of history. The basic idea behind this project is to question the long taught version that people from central Asia arrived in India much more recently, some 3,000 to 4,000 years ago (P 63).

There are 16 members on this committee. All 14 non-ex-officio members are men. All of them are North Indian, Hindi-speaking men. Going by a quick headcount of surnames, they all seem to be Brahmin or upper-caste Hindu men. There is not a single woman among them, nor a single Muslim, Christian, Sikh, Buddhist, Zoroastrian, Jain, Jewish or Animist, no self-identified Dalit or Adivasi, no one from the northeastern provinces of India, not even a token South Indian.

Tony Joseph who has authored an important and much acclaimed book ‘Early Indians’ (2018, Juggernaut), dealing with this subject, had shared his insight in an article which he had written for The Hindu. It had talked about two competing theories about when the first humans appeared in the Indian subcontinent. “The ‘early version’ says they arrived 74,000 to 120,000 years ago from Africa through the Arabian Peninsula with Middle Stone Age tools such as scrapers and points that helped them hunt their prey, gather food, or make clothes,” he wrote. “The ‘late version’ says they arrived much later, around 50,000 to 60,000 years ago, with upgraded technology such as microlithic (tiny stone) tools that might have been used to give sharp tips to arrows and spears.”

In the chapter ‘Shared Heritage’, the author discusses the emergence of syncretism in medieval India which according to J J Roy Burman ‘…conveys the fusion or blending of religions of identification of gods, taking other observances or selection of whatever seems best in each other’ (P. 144) and the celebration of religious diversity and pluralism.

After delineating the features of Indian society which emerged during medieval period, the author moves to the colonial period wherein he takes up not only the changes which were brought in by the Britishers but also the emergence of various political formations and the growing assertion of communal forces – namely Hindu nationalism and Muslim nationalism.

It is interesting to note that in his discussion on Hindu and Muslim communalism he brings to the fore a comparison between ‘RSS and Muslim Brotherhood’ (P 231) which is normally not done. Quoting Rahul Gandhi, it underlines how ‘RSS is trying to change the nature of India’ and how it is ‘similar to the idea that exists in the Arab World of Muslim Brotherhood. The idea is that one ideology should run through every institution and one idea should crush all other ideas.’

In the chapter ‘Communal Violence in Post-Independent India’ the author shares his understanding that ‘Communal violence is predominantly a colonial modern phenomenon’ and provides details of incidents of major communal riots in last thirty-fourty years. He also deals with the oft-repeated perception which says that ‘violence is a spontaneous clash between two communities’ (P 270).

In the chapter Dalits and Contemporary Politics, he explains the challenge posed by Hindu nationalist politics to the Constitution in general and Dalit rights in particular. How this politics is in total contrast and opposition to Ambedkar’s goals and it is trying to co-opt SC/ST through organisatios like Samajik Samarasta Manch-Vanvasi Kalyan Ashram (P 320).

The issue of women’s rights is the theme of the next chapter where it is emphasised that ‘the politics in the name of religion, the politics of RSS combine in India or that of Taliban in Afghanistan, Islamic Fundamentalists, or even Christian fundamentalists all operate on the same wavelength as far rights of women is concerned’ (P 341). In the postscript the author takes up the issue of NRC-CAA and explains how they violate the plural democratic ethos.

Overall, the book makes easy reading and conveys the danger posed by Hindu Nationalism to the values of Indian Constitution and the values of democratic freedoms in a succinct manner.

On re-reading the book, one gets a feeling that it could have been better edited. For example, the last chapter ‘Politics, Religion and Terrorism’ seems superfluous in the overall context of the book.

The author’s celebration of composite heritage and syncretism (see ‘Shared Heritage: Common Aspiration’) can be appreciated more positively in the present ambience which is saturated with hatred of the ‘other’ where one witnesses increasing normalisation of the secondary status accorded to religious minorities. It is quite refreshing to read or listen to our past where apparently such things were absent and there was more bonhomie of sorts between people and people.