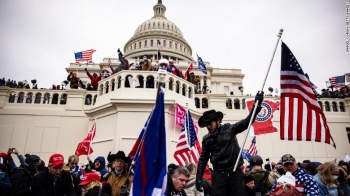 The event that unfolded at the Capitol Hill in the United States of America in the wee hours of the morning of 7th January, 2021 has shocked and shaken conscious people all over the globe.

Harish Khare writing in The Wire on 9th January, 2021 stated that the US can boast of a system of checks and balances which still ensures that the occupant of the White House does not go entirely berserk, but we in India are on a weak wicket. Khare states that Indians are not strangers to the phenomenon of almost all constitutional arrangements acquiescing in a ruler’s authoritarian waywardness. The new ruling clique has draped itself with nationalism, jingoism and militarism; it relies on intimidation against its political rivals, as it is confident of the timidity of various institutional players.

Mob violence has been part of Indian history. In the recent past in the name of cow protection, love jihad and construction of temple, violence, arson and lynching, have been occurring regularly.
Historically speaking, there have been violence of various kinds, types, modes and methods over the years. In 1984, when Mrs. Gandhi was killed by her Sikh security guard, the Congress party carried out violent attacks on the Sikh community. The 1984 riot was carried out for four days in which over 2,000 Sikhs were killed. The Congress party which came to power again did not do anything to punish those who were guilty and redress the grievances of the affected Sikh community. This failure of the Congress party continued to haunt the polity of India for many decades later.

Indian history was blotted by another massive riot in December 1992, when a ‘spontaneous’ as claimed by the perpetrators of this crime,  angry mob demolished, the Babri Masjid, in Ayodhya. This mob, allegedly led by right-wing Hindutva leaders, believed that the mosque was built on the birthplace of the Hindu god, Ram. This act of destruction did not limit itself to Ayodhya but its impact was felt all over India. Especially this was the case in Mumbai. Large-scale rioting ensued then on for days which resulted in the massacre of over 900 Indians out of which the largest number was from the Muslim community.  The Muslims were systematically targeted by right-wing Hindu mobs for protesting the demolition of the Ayodhya mosque.

Once again in 1998 in the Dang area of South Gujarat, Christians mostly from the Tribal communities were brutally attacked. The attacks reportedly started at the end of 1997 before the Christmas of 1998 and after the anti-Christian rallies in the Dangs District. The attacks included assaults and killings of Christians, attacks against Christian schools, institutions and shops, damages, demolition and burning down of Prayer Halls and Churches mainly by members of the Bharatiya Janata Party, Vishwas Hindu Parishad, Bajrang Dal and Hindu Jagran Manch. The culprits were not booked and the victims continue to reel under the fear of being victimised if they practice the religion which is a right provided in the Constitution of India.

In 2002, a riot broke out between the Hindus and Muslims in Gujarat when Narendra Modi was the chief Minister. As reported, a train ferrying Hindu karsevaks was allegedly burnt by a Muslim mob. In revenge, Hindu groups stormed Muslim-dominated residential complexes and massacred them. Then chief minister Modi received national and global condemnation for not acting swiftly or calling the army on time and allegedly letting the rioters to run amok.   According to official figures, 790 Muslims and 254 Hindus lost their lives, while the civil society claims that over 2,000 people were massacred. Those who undertook relief and rehabilitation in the affected areas were shocked to see in Juhapura the writings literally on the walls of house in the same locality – Hindustan and Pakistan.

Another violence is the Kandhamal violence which was unleashed by the Sangh Parivar against the Dalit Christians on the alleged crime of the killing of a Hindu Swami Lakshmananda Saraswati.  According to civil society reports the violence resulted in at least 100 Dalit Christians killed, 40 women sexually assaulted, more than 395 churches vandalized or burnt down, over 5,600 houses plundered or burnt down, over 600 villages ransacked and more than 60,000 people left homeless.

The riots in Delhi in February, 2020,  have brought another bitter reminder of the tinderbox of India’s socioeconomic fabric. It has left bitter taste for the Muslims who are further forced to take the place of second class citizens in India. As known to us, this violence was in retaliation to the peaceful demonstration at Shaheen Bagh, New Delhi by the Muslim women against the controversial Citizenship Amendment Act imposed by the Modi government. This act could potentially take away the citizenship of those who cannot prove their Indian ancestry, but allowed concessions only for members of non-Muslim faiths.

Since the Prime Minister and Home Minister themselves took negative attitude towards the protesting community, it gave boost to the Sangh Parivar goons to run riot. In the riot, 53 people were killed, most of them were Muslims who were shot, slashed or set on fire. More than a week after the violence had ended, hundreds of wounded were languishing in inadequately staffed medical facilities and corpses were being found in open drains. The present government and its communal agents have succeeded in profiling the ‘Muslim Phobia’ and have further destroyed this country.

The last in the list is farmers’ protest. They are opposing 3 Farm Laws, which the government claims are for the benefit of the farmers. Instead of addressing the issues raised by the protesting farmers, the Prime Minister, Modi trained his gun at the opposition parties and accused them of misleading farmers. Talking on 25th December, 2020 he pretended to be humble and said, “We have not claimed that we have all the knowledge. There should be debate. That is how democracy works. We are ready to address all issues in an open mind”. The same Prime Minister did not think is contrary to democratic principles when he bulldozed these ordinances without following any democratic processes. And that too when the country was reeling under the threat of COVID-19.

Taken together, it is dawning on the conscious and concerned citizens of India what unfolded itself on 7th January, 2021 at Capitol Hill is a warning written on the wall to desist any aggressive, authoritarian, communal, fascist, undemocratic and divisive polity. But there is no stopping there. The warnings of Dr. B.R. Ambedkar can be a guide post in this review and the program of action. On November 25th, 1949, Dr. Ambedkar spoke of the need to give up the grammar of anarchy, to avoid hero-worship, and to work towards a social – not just a political – democracy. This project has to begin towards a democratic, secular, socialist and inclusive path of rural reconstruction and nation building. This alone will save India and Indians.