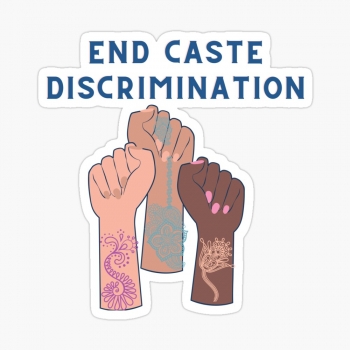 The practice of caste system should go from India. The Sunday Times dated October 2, 2022, said, “Man shoots sister 5 years after inter-caste marriage.” The girl was shot dead because she married a person belonging to another caste. Caste-killings are a reality in India; every now and then we hear of them. Many believe that caste is of divine origin, but in reality it has nothing to do with anything divine. Caste practice came into existence between 1000 and 600 B.C. The Aryan invaders wanted to keep their identity and they found that the only way to keep it was through caste system. Now the question of Aryan identity does not even arise and hence caste has lost all its meaning and relevance and it should go from India lock, stock and barrel.

Now let us see how it all originated in India. Long before the Aryans came to India, there existed in the Indus Valley an advanced civilization comparable to that of Mesopotamia, Sumer and Egypt. This is evident from the excavations at Mohenjodaro and Harappa. Their cities had straight streets, good drains and sewers. The houses were built of fired brick. They used an alphabet that has not yet been deciphered. They knew the use of bronze. They worshipped images. In around 1500 B.C. their civilization came to an end with the advancement of the invading Aryans.

The fusion of the Aryan and non-Aryan traditions went on for a long time. And this process gave birth to some of the worst evils in society and one of them is caste. The word “caste” is a Portuguese one meaning cast or mould. “Caste” is the word that the Portuguese used to designate the strange social practice that they found among the Hindus. “Jati” meaning “race” is the Indian word used for it. Another word commonly used is “varna” meaning colour. The colour of the invaders was different from that of the original inhabitants.

As time passed, the society became more complex with the fusion of the conquerors and the conquered and the duty of offering sacrifice and puja became the privilege and prerogative of the Brahmins. Originally the word “brahma” meant prayers, hymns and poems said in honour of the Vedic gods and Brahmin signified the person who said them. In Vedic times anybody could be a Brahmin. The poets among the Aryans composed the songs and officiated at the sacrificial rituals.

The invading stock had various functions to perform: sacrificial rituals to please the gods, warfare and administration for safety and security, rearing cattle and agriculture for livelihood, and all these functions need helping hands and hence the Sudras or the servant class. In no way these classes can be understood as castes as we mean today. The four-fold division of labour was not anything new; this had already existed in Central Asia, the original home of the Aryans. Moses, the law-giver of the Jews, had divided the people into different classes. Similarly, Numa Pompilius had done the same with the Romans. So, the four-fold division of the people according to the work they did was not anything new.

The Aryan conquest and expansion continued for a very long time and gradually engulfed the whole of India. As the Aryan expansion continued, the number of the non-Aryans greatly outnumbered the Aryans and the fusion of the Aryan and non-Aryan traditions and culture became more complete. Maintaining the Aryan identity itself became an insurmountable problem as inter-marriages had become a necessity or a compulsion because of the dwindling number of the Aryans. To maintain the Aryan identity, the concept of caste was introduced; the existing class distinction or division of labour became caste distinction. Wittingly or unwittingly, the master stroke was dealt by declaring that class was by birth and no one could marry outside his or her class. Thus came into existence the caste system in India. Before this aberration came into existence, a Sudra could become a Brahmin.

To build up a strong and prosperous India, we should do away with caste system. The hallmark of the Indian Constitution is freedom, equality, fraternity, truth, justice and peace, but the practice of caste stands in the way of the actual realization of these basic fundamental principles of human life. If we have to take our rightful position in the comity of nations, if we have to build up a prosperous, powerful, cohesive, peace-loving and non-violent society, we have to do away with this meaningless and abominable practice of caste.

Some believe that caste is part of their religion, but in reality, as we have seen above, it has nothing to do with religion.  The practice of caste system is practically found in all the religions in India. It is found in Hinduism, Islam, Christianity, Buddhism, Sikhism, etc. Caste is an aberration that crept into our society; it is a social phenomenon that came into existence because of the social and historical circumstances. Since it eats into the very vitality of our economic, political, social and human development, it is high that we did away with it.