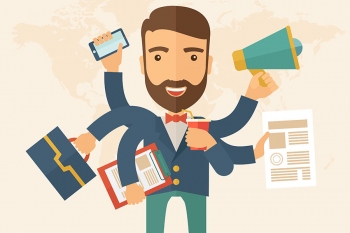 In the post-pandemic era, work from home is fading away and work from office is the new normal.

Any guesses as to what is currently being hotly debated across corporate India? It is moonlighting or the practice of employees having a second job. Simply put, it is holding more than one job.

Remember how the sudden outbreak of the Coronavirus two years ago led to the worst job crises globally since the Great Depression.

In India, too, it triggered mass layoffs, pay-cuts and a hiring freeze across organisations. It further created uncertainty and hysteria among employees. With several people losing their jobs, there have been instances where many people were forced to sell vegetables and fruits for a living during those dark days.

But COVID-19 was also a game-changer. The pandemic is said to have witnessed a 46 per cent rise in freelancing during the lockdown, wherein a number of professionals especially in the IT sector, apart from working from home, also took up second job to secure their position.

However, with businesses inching back to normal, more companies in the corporate sector are making efforts to bring their employees back to office. They have also discovered that some of their employees who had rather secretly taken up secondary jobs during COVID days are somewhat reluctant to return to office.

Not long ago a Delhi-based tech company was in news after some 800 employees resigned in masses after the firm put an end to their work-from-home arrangements.

Although there are some employers who welcome moonlighting because moonlighters are often cheaper than regular employees and are more willing to work flexible hours, the cause for concern among others is the loss of productivity at the primary job as moonlighting can lead to overwork.

Moreover, using company laptops or software by employees for their additional jobs is seen by many employers as unethical. Well, it's another story.

For many working people, a part-time job is a necessity, despite holding a primary full-time job because of financial hardship or as a way to improve their standard of living.

It is not uncommon for such people to take up secondary jobs, for instance, like looking after accounts in another company, conducting tuitions, etc., to name a few after their working hours or on weekends and holidays for various reasons.

Others may take up an additional job as a way of learning new skills or preparing for a career change. Is it wrong for a driver employed in a firm to drive a taxi during his spare time or a maid to work in multiple homes?

Therefore, someone could work a normal job as a primary source of income but work at another night job to earn extra money. Suffice to say that slowly many a part-time job seems to be disappearing.

Many employers are of the view that such employees who hold another job during regular work hours will affect productivity, lead to conflicts of interest and possible data breaches.

There are some employees on the other hand who seem to reason out that low compensation and lack of job security force them towards moonlighting.

Organisations particularly in the IT sector have plans to shift to a hybrid model over a period of time. Others have asked their employees to work in the office for at least three days a week.

According to Microsoft CEO Satya Nadella, companies should not spy on employees to see if they are working. A Microsoft study has shown that 85 per cent managers are afraid employees aren’t doing enough and 87 per cent employees felt they are productive and even burnt out.

Wipro Chairman Rishad Premji reportedly observed, recently, "There is a lot of chatter about people moonlighting in tech industry. This is cheating -- plain and simple".

Shocking isn't it that 300 employees of Wipro were found to be working with their rivals? They have since been sacked.

Another IT giant, Infosys, has advised its employees against moonlighting, warning them that such activities would lead to termination of contract.

For those in support of moonlighting say that "it’s ok for employees to earn extra from side jobs, as long as they aren’t committing fraud".

Mr Rajeev Chandrasekhar, Union Minister of State for Electronics and Information Technology, has said that companies should not put a lid on employees’ dreams. But at the same time, he has maintained that individuals with contractual obligations should follow the contract.

Amidst these developments, Bengaluru-based online food ordering and delivery platform, Swiggy, operating in 500 Indian cities, recently announced a permanent work-from-anywhere policy for the majority of its employees.

Accordingly, its corporate, central business functions and technology teams can work remotely and converge once every quarter at their base location for a week to promote in-person bonding.

This August, Swiggy also reportedly launched its "Moonlighting Policy" allowing its employees to take up external projects for pro-bono or economic consideration based on internal approvals which is available to all full-time employees of Bundl Technologies (which runs the Swiggy app), including subsidiaries, affiliates, associates, and group companies. The intent is to enable Swiggy's employees in pursuing their passions for economic interests alongside their full-time employment.

As such, under the said policy employees are allowed to work second jobs, outside normal business hours of the primary job, under certain conditions. That is any project or activity that is taken up outside office hours or on the weekend, without affecting productivity and does not have a conflict of interest, can be picked up by the employees.

However, the reading between the lines is that such projects which pose a higher risk of conflict of interest or interference with the employees' duties to the company are subject to an approval process.

There has been sharp reactions from some quarters on the contention that unless Swiggy is able to provide proof that moonlighting employees earned a particular amount, it is going to look like a public relation stunt and a talent retention attempt. Be that as it may.

What does the law say? Under Section 60 of the Factories Act,1948, there is restriction on double employment. Accordingly, "No adult worker shall be required or allowed to work in any factory on any day on which he has already been working in any other factory, save in such circumstances as may be prescribed". However, many organisations are outside its ambit.

Even as the debate on moonlighting is on, it needs to be appreciated that working for long hours may augment some extra income but it can also take a heavy toll on an individual's health.

According to the findings of a recent study published in the National Library of Medicine, long work hours can contribute to psychological stress and work stress. The study found that working for 10 or more hours per day, 40 or more overtime hours per month and 60 or more hours per week created stressful feelings. It found an association between long hours and depression. Notably, female workers were found to have a higher risk of experiencing depression and anxiety than male workers when working the same number of hours.

Moonlighting is challenging. At a macro level, perhaps organisations can have a relook at their human resource policies so that employees don't feel exploited. At the same time, employees must realise that money can buy happiness, but only up to a point. However, as the adage goes the greatest "wealth is health". There is an imperative need to recognise and respect the direct correlation between health and wealth. Healthy employees are more productive. Investing in health can bring rich dividends.