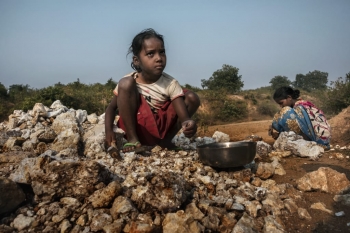 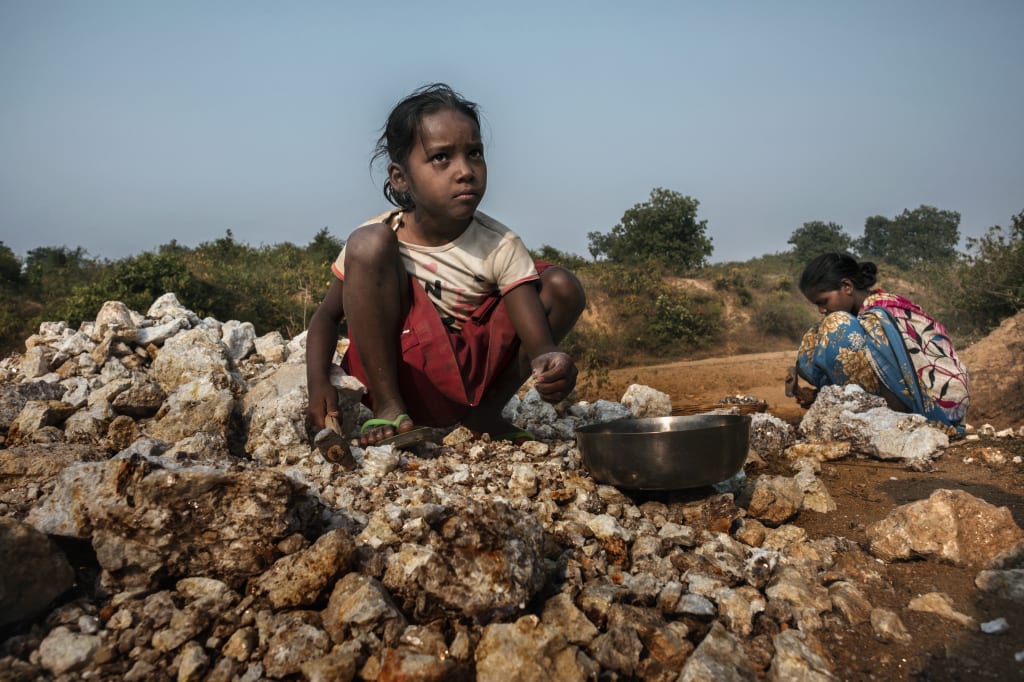 Some years ago, there was a mushroom growth of “English Medium Schools” in every nook and corner of urban areas in India. In the similar manner, there has been a sudden increase in the number of “Beauty Parlours” in the urban as well as rural India. Among the fashion conscious, mineral makeup is all the rage these days. It uses natural minerals and is said to be a healthier for the skin than ordinary products. But the process of extraction of these minerals, particularly mica, using child labour in India is now causing serious concern.

The Bachpan Bachao Andolan (BBA), an NGO working to eliminate child labour, has estimated that over 5,000 children work in these illegal mines. This number has been confirmed by Suresh Kumar Jain, owner of a Koderma-based mica exporting company. Children as young as five years of age are found working in hazardous conditions. These children work for 5-6 days per week, 7-8 hours per day extracting mica and get a meagre payment. They operate sharp and heavy tools. They are susceptible to inhaling dust from stone-cutting and face the risk of getting injured from falling stones. These children are also made to carry more than 15 kg of mica for several kilometres to the intermediaries in towns. Their homes are often several kilometres away as these illegal mines are located in forest areas.

Death-trap: The abandoned mica mines start shimmering under the rising sun in Koderma, Jharkhand, as a group of sleepy children trudges towards the Charki mine holding their tools. Five-year-old Ajay Das hurriedly slips into a narrow hole and starts his day. His tiny hands can barely balance the hammer, but he still hits the glistening wall accurately. Ajay works six days a week and after labouring for seven to eight hours each day in hazardous conditions, he manages to earn a paltry 20 rupees barely enough to kill his hunger pangs.

“The mines were closed two decades ago. Since then, the poor people from neighbouring areas have been involved in scrap mining. This leads to mishaps every now and then. At times, children working with their parents often get trapped and die when the roof or the mine wall collapses” Ramlakhan Paswan, a school teacher working near the Charki mines, told the media person. Miner Karu Das, 26, lost his wife to an accident in Charki mine five years ago. “She had come to collect mica scraps but got trapped in the mine,” Karu said. “By the time we dug her out she was dead.” But Karu continues to risk his own life and the lives of his children as they have no other source of income. “Legal or illegal, it guarantees two square meals a day”, he said.

Soaring demand: A boom in mica – a key ingredient in products such as facepacks, mascara, eyeliner, lipstick, and nail polish – is being fuelled by soaring demand for natural cosmetics, as artificial makeup made of synthetic chemicals have been linked to illness, including cancer. According to the Indian Bureau of Mines, the country officially produces about 15,000 tonnes of crude and scrap mica a year, but surprisingly, in the last few years India exported more than 150,000 tonnes – eight times more than the official figure. About half of India’s export was destined for China, from where it was then routed to several European and US cosmetic giants.

Illegal: It has been two decades since most mica mines were closed on environmental grounds, but the closures prompted many people to resort to illegal mining, pushing children into this hazardous work. According to DanWatch - an NGO that campaigns against the exploitation of workers - most of India’s exports of high-quality mica-flakes comes from illegal mines – and are produced by undernourished children from poverty-stricken families. Jharkhand lost more than 5 billion dollars to illegal mining in the recent past according to a recent federal government report.

Survey: A report by DanWatch said: child labour is being used in the eastern states of Jharkhand and Bihar to extract mica which is used to add glitter to natural cosmetics, produced by at least 12 multinational companies such as L’Oreal and Estee Lauder. “In our research we found illegal mica mining often involves child labour, which is a significant problem in India,” said Louise Voller of DanWatch to the media. He then added saying, “This report confirms that most companies do not give the consumers a clear picture of their supply chain.”

The report on the use of child labour in the cosmetics industry by DanWatch examined 16 companies behind 20 brands. Twelve cannot or will not disclose where they source the mica they use. German company Merck, which supplies mica to cosmetic brands around the world such as L’Oreal, admitted to sourcing the raw material from exporters in Jharkhand and Bihar. However, the company said that the minerals were extracted from legal mines. But research carried out by DanWatch suggests the contrary, pointing out that it was impossible to differentiate between mica extracted from legal and illegal mines. Local exporters have maintained that the number of legal mines has decreased drastically since 1990.

The intermediaries, however, will not name their foreign clients. “We cannot reveal the name of our clients. It is a business secret. All I can tell you is that we process the raw material and ship it to our clients abroad,” said Mohan Modi, an intermediary, who even refused to disclose the name of his company. Merck’s manager of media relations Gerhard Lerch, said: “The Merck Social Charter explicitly bans child labour. We demand that our suppliers act accordingly, stipulating in our contracts with them that they do not employ children. Merck has implemented all necessary steps to ensure compliant-sourcing and to ensure that no children are involved in the processing of the pigment.” Merck said it has reduced dependence on Indian-sourced mica, but it will continue to receive it from mines in Jharkhand. In terms of efforts to combat child labour in mines, Lerch said the company has a tracking system for the mica, and it constantly communicates with the Jharkhand government.

Responses: United Nations conventions make it illegal for children under 14 years- old to work in mining, which the International Labour Organisation said is the worst form of child exploitation. Yet the fact that child labour is used to mine mica in India appears to be well known – even though the government turns a blind eye to the problem. In a face-saving gesture, the pharmaceutical giant Merck opened schools in the villages to prevent children from working. Bachpan Bachao Andolan’s founder Kailash Satyarthi has called Merck’s efforts “window dressing”. He said, “They do not have a sustainable programme. They started the schools with much fanfare, but we have observed that none of the schools and health centres are functioning properly now.”

As a sustainable response, BBA has created “child-friendly villages” in Jharkhand where children do not work.  Satyarthi said that the innovative approach of creating ‘Bal Mitra Grams’ (child-friendly villages) in Jharkhand has proved that eradication of child labour was possible with the joint efforts. He further said, “I am confident that the lustre of cosmetics, glitter of paints and insulation in electrical appliances will not be tainted with blood, sweat and toil of children in mica mining. The strong and serious statement made by Satyarthi is: “The government does not want to stop illegal mining and cares little about the welfare of the children.”

Questions: The serious statement of Satyarthi paves way to other pertinent questions like:

•    Why does the government turn blind-eye to child labour?
•    Beti Bachhao-Beti Padhao is the pet slogan of the present Prime Minister. Yet the National Commission for Protection of Child Rights (NCPCR) has decided to close all ‘child care homes’ in six states (other states to follow). Is this not an irony?
•    If the child care homes are closed, these children will be out on the streets. Their vulnerability will increase manifold. Does the government expect the number of child trafficking, child sexual abuse and child labour to grow?
•    When will these children see the Achhe Din promised by Modi?

A concerted effort of all NGOs, social/human rights activists and responsible citizens is needed to stop child labour in ‘our own locality’ and help the needy children lead a life of dignity.