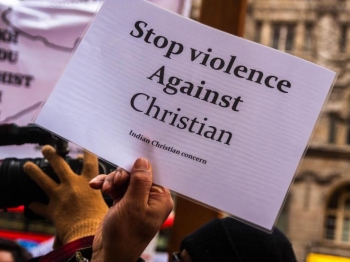 Christians on the ‘Hindutva Cross’

India’s rankings in religious freedom and human rights have been on a slippery slope since the ascension of the Hindu ‘nationalist’ regime of Narendra Modi in 2014. The country’s pride has fallen from 0.58 in 2014 to a pitiable 0.31in 2019, and currently shares the slot with a war-torn South Sudan in the World Bank’s Freedom of Religion index.

The right-wing extremist cadres of Modi’s Bharatiya Janata Party (BJP) have been on a rampage against India’s minorities, especially the Muslims and Christians, and have callously made minority institutions, places of worship and festivals the target of their xenophobic atrocities. Each of these attacks have been unquestionably traced back to the nefarious designs of the militant and subversive Rashtriya Swayamsevak Sangh (RSS) and its off-shoots like Bajrang Dal, Vishwa Hindu Parishad (VHP), Hindu Yuva Vahini and the Hindu Maha Sabha.

The RSS remotely guides the violent activities of its splinter-family, which is collectively referred to as the Sangh Parivar. They have placed senior Pracharaks at the helm of each outfit to plan, execute and control their disruptive agenda, but nimbly disown them after they hit their targets. The organization has a symbiotic relationship with the Nazis of Germany, which has helped them operate dexterously without registration or formal membership for close to a century.

Despite their questionable style of functioning that raises many eyebrows, the RSS has been able to parade itself as the largest ‘cultural’ organization in the world. The fact that the outfit has its Pracharaks strategically controlling all the vital constitutional posts including the President, the Vice-President, the Prime Minister, a majority of the Union Ministers, members of both Houses of Parliament and the Governors of key states is indicative of the absolute desolation of democratic institutions in present day India.

The roots of the relentlessly brutal attacks on Muslim and Christian minorities can be traced back to the scriptures of the RSS, the writings of their second Sarsanghchalak M.S.Golwalkar in particular. Golwalkar, popular among his followers as ‘Guruji’, wrote volumes on the ‘divinity’ of the putrid caste system, the infallibility of the Hindu race, the iniquity of Abrahamic religions and the existential need of the Hindus to decimate religious minorities in order to establish their dreamland of Hindu Rashtra.

In his divisive thesis titled The Bunch of Thoughts, the ‘Guru of Prejudice’ slapped the traitor tag on India’s Muslim and Christian minorities for the sloppy reason that their holy places of worship lay outside India’s territorial boundaries. Despicably enough, Golwalkar also savagely eulogized the Jewish Holocaust by Hitler with the ex

Careful examination of the operations of the RSS & Co in the post-Golwalkar era would demonstrate that the advice was taken seriously by their militant cadres who have since doubled down on their single-point agenda of exterminating the country’s minorities both socially and culturally at all times, and physically where possible. The amplified spate of attacks on the country’s minorities under the myopic eyes of the Modi government stems unmistakably from the adherence of the Hindutva votaries to the spiteful dreams of their vicious Guru.

In We or Our Nationhood Defined, Golwalkar unabashedly peddled pseudo-science to advance the sham that the Arctic was part of India ten thousand years ago! However, Golwalkar’s ‘sons of the soil’ fantasy has been conclusively debunked by several studies, the most prominent being a massive DNA research by 92 eminent geneticists that was published in the prestigious Science journal in 2018. The study narrowed down the lineage of the entire current population of India to four ancestral streams, all of whom had migrated into the land at different stages of the peopling phase.

The Hindutva propagandists have picked a bone with the Muslim and Christian minorities for allegedly undermining their Hindu Rashtra through toppling the sensitive and contentious ‘social balance’. They slyly disseminate fictitious accounts of the so-called Semitic conspiracy to unsettle India’s glorious Hindu heritage and demographic dominance. This is where they bring in religious historiography and historical revisionism by the likes of James Mills and P.N.Oak, to peddle their half-baked stories about Hindu victimization by Islamic rulers and proselytization by the Catholic Church.

The Sangh Parivar have for years, maligned the benevolent and rich cultural synthesis under the Mughals, and the stupendous reformation of education and healthcare under the Christian missionaries due to their pathological blind spot for the non-Hindu shades of the country’s history. The idiocy of their allegation of unrelenting proselytization of the Hindus for 800 years by Islamic rulers in a country that still has nearly 80% Hindu population has lately caused some after-thoughts, resulting in innovative slurs like Love jihad that are more appealing to the contemporary society. Unsurprisingly, the foxy campaigns of the Sangh Parivar that are aimed at instilling minority-phobia into the minds of the country’s Hindu majority yields them lucrative returns consistently on the caste and hate-ridden Indian electoral turf.

The growing anxiety among India’s gullible and emotional Hindu electorate about their ‘ruthless’ Muslim and Christian brethren, purportedly ‘multiplying at a rate of knots’ to overturn the country’s demographic and cultural makeup, is the core of the minority hate that has made India a communal plague spot. Lynching by cow vigilante groups and Hindutva hooligans using violence to elicit the ‘Jai Sriram’ chant from non-consenting Muslims are all perturbing signs of a problem that is far more insidious and ravaging. Lately, the Hindutva hatemongers have spread their vulture wings into places as far as the US, thus making the once-localized anxiety turn into a full-blown pandemic of hate.

Careful inspection of how the RSS family plans and orchestrates violence would reveal an intriguing difference in pattern across the two major minority communities. While assaults on Muslims occur in spurts of large-scale violence which lasts for days and ‘yields’ high casualties, atrocities against Christians proceed almost non-stop in the Hindi belt in the form of sporadic incidents. Muslims are usually targeted en-masse while Christian missionaries and nuns are singled out by right-wing ruffians usually in the pretext of thwarting religious conversion attempts.

In sheer contrast to their Muslim ‘siblings’, the Christians have fared poorly in effectively dispelling majoritarian assaults by the Sangh Parivar. Contrary to popular belief that it is their low share (2.3%) in India’s population of 1.3 billion, which has constantly failed them in this area, the real reason is their erratic demographic spread across the country. In a ‘cosmetic democracy’ like India, with a robust outer shell and a pathetically shallow inside, the combined value of a community’s vote power in a constituency dictates their stakes in power sharing, political representation and social bargaining in that riding.

It is strange coincidence that the States where Christians form a majority are invariably the most scarcely populated in the country. Interestingly, among the top 10 most populous States, Christians make up 1% of the entire state population in just three.

Demographically, the Christian population is not a force of influence in 27 out of the total 35 states and Union Territories in the country where their numbers are reeling under the 10% mark. Speaking from an electoral point of view, this uneven spread has hampered their stake to no end, as political parties in India do not necessarily view them as a sizeable vote bank in a majority of the electorates. Their concerns are not the top priority of the media in those regions either, which explains why most atrocities against them in the northern States do not even get reported for days.

The demographic disadvantage of the country’s Christians is aggravated by many folds by the self-serving and narrow stance taken by the Church in the few states where the community holds some political sway. In Kerala, where the Christian presence is the highest in India, the Church has adopted the pusillanimous position of being totally subservient to the hegemony of the Sangh Parivar. In a state where Christians form 18% of the electorate, the Church has chosen to shrug off the atrocities perpetrated against them in several parts of India at the behest of the Sangh Parivar, and have perturbingly chosen to hug those who have vowed to eliminate them.

They have pathetically played into the devious hands of the RSS which has managed to pit them against the Muslim community with the hope of making a dent in the consolidation of minority votes. Notwithstanding a huge RSS presence and the majority share of their shakhas, Kerala has been the perennial waterloo for their political arm, the BJP. Social fragmentation has been the reliable success mantra of the BJP since the eighties, and preaching hate is what the RSS does best. They are attempting at gaining some foothold in the State by re-creating the political strategy that ensured victory for the Allied forces in World War II (the enemy of the enemy is my friend) to polarize the two powerful religious minorities of the State.

They have nothing rosy to expect from the Muslims who know them well, so their obvious target is the Christian population, a section of which is still bafflingly delusional about the Sangh Parivar. This dreamy lot takes pride in re-christening themselves as ‘Chri-Sanghis’ and shamelessly pander to their saffron masters by indulging in the kind of Islam-bashing that would give the ‘real Sanghis’ a run for their money. They have also started to scream louder than the Sangh Parivar cadres for a Hindu Rashtra while flaunting their Hindu ancestry as a desperate bid to get ‘fair accommodation’ when the castle in the air is actually built.

The Christian leadership of Kerala has pitiably chosen to keep their fellow-minority Muslims at loggerheads, while being illusive about the camaraderie of the RSS, an organization whose scriptures have unambiguously labelled them an internal threat to their Hindu Rashtra alongside the Muslims and the Communists. Thus, while presumably holding out for favors from the federal investigative agencies in the various legal tangles they are locked in, and possibly other handouts and freebies from the RSS regime in New Delhi, the Church has squandered away their irrevocable Biblical mandate to be the pious Shepherd committed to their tortured, beleaguered and crestfallen sheep. I wonder how long they can ignore the divine call to speak up for the mute and impassively hang their Christians to dry on the Hindutva cross!