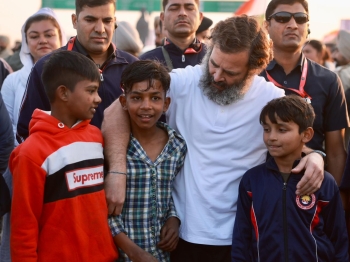 I need to preface this essay with a caveat. I was an unrelenting and downright mean critic of the Gandhi trio for privileging their own interests over everything else and for refusing to cede power within the party when all was lost, which cussedness helped strengthen the tyrant. I wrote desperate emails to the Congress website prior to the Lok Sabha elections of 2019 and again in the run-up to the UP elections of 2022, urging the Gandhis to ally with other parties even as subsidiary partners. That did not happen, and it is now regrettable consequential history! However, the recent election of a seasoned Dalit non-Gandhi as President of the Congress party and, even more crucially, Rahul Gandhi’s coming of age, have forced me to eat my words about him. For one, he is not like his mother, which is a happy augury! All things considered, I am now an unabashed supporter of Rahul Gandhi’s mission to resuscitate Indian democracy. There’s certainly no harm in imagining a better world.

We have never been so disengaged from one another. We seem to have lost the capacity for compassion, for brotherly love, for ordinary humanity. Exploiting our deathless caste, communal and regional cleavages, the bigots have transformed the largest democracy into a schizophrenic nation besieged by hate. Presiding over the psychic wreckage is the most menacingly powerful socio-political dispensation (the BJP-RSS nexus) ever, that has fattened by dividing our society.

Last week, a hawkish Mohan Bhagwat, the reigning pontiff of Hindutva, gave a call to war, throwing down the gauntlet to the very idea of secular India conceived by our founding fathers. He blithely stated that Hindu society had awakened after being at war for over 1000 years and was now ready to do battle to defend Hindu society, Hindu Dharma and Hindu culture, “not against an enemy without but against an enemy within.” In the same breath, he warned Muslims to “abandon their boisterous rhetoric of supremacy”, leaving no doubt who he considered the enemy. And for good measure, he reiterated the majoritarian trope: “The simple truth is this, Hindustan (the land of the Hindus) should remain Hindustan”, where minorities live on sufferance. His was a textbook case of seditious, hateful speech, but then he was merely articulating this authoritarian regime’s creed of governance. As one of our leading public intellectuals put it, what’s on the line is the spirit of fraternity and our democratic national self itself.

Never has a country been so badly in need of awakening and moral re-armament to combat the fissiparousness that is destroying us. In this bleakly joyless period, one constantly reminds oneself of Rajmohan Gandhi’s reassuring certitude that evil cannot last forever, and as evil has reigned for quite a few years, its time for the good to prevail. Ironically, at the grimmest of times, a glimmer of hope has sprung from the most unlikely source – Rahul Gandhi and his felicitously named Bharat Jodo Yatra (BJY), which is turning out to be a hope-filled song of redemption that dares to pitch itself against tyrannical power, against hate, against fear, and speaks for the oppressed and the vulnerable.

No political figure in recent times has faced greater criticism than Rahul. For the last eight years, there has been a relentless campaign of calumny against him -- spearheaded by Modi and amplified by the media -- mocking him as an unintelligent, ill-informed “Pappu (dolt)” and an entitled, spoilt “Rahul baba”. The criticism resonated with the people who watched the Congress party hit the depths of electoral ignominy as Sonia Gandhi privileged the promotion of family over the interests of the Congress party. Even that consummately sophisticated and perceptive Barack Obama, in a fleeting interaction with Sonia and Rahul in January 2011, couldn’t help noting Sonia’s focus on projecting her son in the most favorable light, which left Obama to wonder if “the baton would be successfully passed to Rahul, fulfilling the destiny laid out by his mother.” The fond mother’s aspirational fantasies of dynastic hegemony were the millstone round the neck of her devoted son, Rahul.

Misfortune and bad times can make or break people and organizations. Until a few months ago, the once mighty Congress party, steered by the dynastic trio, was floundering, internally conflicted and uncertain about the future. Virtually at a dead end, there was no option but to do what well-wishers of the Congress party had been demanding for years. After 24 years of family reign, the Congress party elected a Dalit non-Gandhi, Mallikarjun Kharge, as President of the Congress party. This move, that was a long time coming, signaled serious intent to do things differently in order to rejuvenate the moribund party.

But the real regeneration of the Congress party has been triggered by Rahul Gandhi coming into his own, metamorphosing from caterpillar to butterfly. Carl Jung, the renowned Swiss psychiatrist, believed that midlife is a critical period in a person’s life “when a metanoia or a mental transformation, not infrequently, occurs.” This Jungian mutation has, most certainly, happened in Rahul’s case. Emerging from the shadow of his dominating mother’s overweening ambition for him, he has discovered himself. He can no longer be accused of being an entitled family dynast who has everything laid out for him but is proving to the world that he is an accomplished politician in his own right.

The Bharat Jodo Yatra is foremost a peaceful, deadly serious protest march, not in opposition to an ordinary political adversary but against a creeping tyranny that has divided us and threatens our very survival as a secular democracy. At the kick-off of the Yatra in September in Kanyakumari, Rahul stated rather dramatically: “I lost my father to the politics of hate and division. I will not lose my country to it…. Love will conquer hate; hope will defeat fear. Together we will overcome.”

A man who has been ridiculed for his languorous political style and for periodic holidaying, has been trudging across the country for nearly five months, braving the elements in a T-shirt, displaying not only physical fitness but steely determination, single-minded commitment and raw courage, unwavering in his intent to rally round his fellow men, women and children in the cause of an inclusive, democratic and fraternal India. Despite the sheer physical arduousness of the trek, he has won hearts with his calm, stoic and exemplary conduct, his compassion, his unfeigned, authentic human touch in every interaction, his sheer decency – altogether so unlike a politician! Just the other day, reacting to a pesky journalist, he said that he had killed the old Rahul and would not let criticism, good or bad, deflect him from his mission.

Which brings me to the criticism that the Yatra has purely sectarian interests and is all about refurbishing the image of Rahul Gandhi and reviving the Congress party. There is no doubt that these are important objectives and, to quote Aldous Huxley, democracy depends on individuals and groups making intelligent and rational choices in their enlightened self-interest. But the Yatra has stretched infinitely beyond self-serving obsession. The Yatra must be assessed on the basis of the issues raised and their resonance among the common people, and in this regard, it has been an unmitigated success. It has amplified, like no other medium could, the injustices, the hate and the oppression perpetrated by the ruling regime, and the criticality of idealism and decency in politics. Even the Godi media have been sucked in by this momentous political spectacle that has captivated a nation. As a protest march against injustice, the Bharat Jodo Yatra is as historically significant as Martin Luther King Jr’s Selma to Montgomery march of 1965.

The grueling 3,500 kms journey of penitential self-flagellation has presented a panoramic pageant of this beautiful and sad country, sprinkled with unforgettably poignant vignettes – Rahul playing with children, helping a girl wear her sandals, riding a bullock cart, hugging Rohit Vemula’s mother, blowing kisses in the direction of the BJP office, tying his mother’s shoelaces, assisting the elderly, grooving with tribal dancers, consoling the distressed. Such a refreshing contrast from the carefully manicured photo-ops of the Vishwaguru!

The Yatra has succeeded in its primary mission of projecting the potent threats to our secular democracy, but more importantly, appealing to our common humanity and critical need for fraternal re-connection with each other. After all, though “we may not be in the same boat, we are in the same storm” and therefore need to fight unitedly. But it would be a colossal blunder if the positive response to the Yatra is viewed by the Congress party as attestation of its renewal and inspires the foolish delusion that it can now take on the BJP juggernaut on its own.

Judging from what’s happened in America where, even after the horror of the January 6, 2020, insurrection perpetrated by Donald Trump, his constituency of racists is firmly behind him, it is insane to believe that this country will respond differently to evil. Be under no delusion: the bhakts here are steadfast in their loyalty to the authoritarian. The churning and switching of allegiances in the electorate because of the Yatra are happening among those already opposed to the present regime. The inescapable reality is that only a united opposition can take on the Narendra Modi phenomenon, which, indubitably, has been slightly dented by Rahul’s fearless jousting.

In conclusion, it must be said that our country is a more hope-filled place because of the Yatra. And to borrow the incomparably eloquent Nabokov’s Don Quixote critique, the Bharat Jodo Yatra has transformed Rahul and now “the parody has become the paragon.”