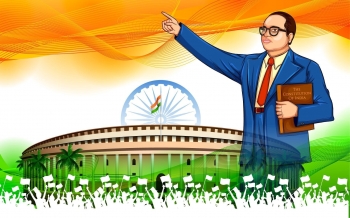 “If it be asked, what is the most sacred duty and the greatest source of our security in a Republic? The answer would be, an inviolable respect for the Constitution and Laws…. A sacred respect for the constitutional law is the vital principle, the sustaining energy of a free government” -- Alexander Hamilton, 1794.

November 26 is designated as the ‘Constitution Day’ to commemorate the adoption of the Constitution by ‘We the People of India’, acting through the Constituent Assembly.  It is an occasion to understand the incredible and miraculous story of our Constitution and to promote constitutional values among citizens.

In the last 73 years of its organic and progressive growth, the Constitution of India has served as the framework and the sustaining energy of the organs of State. Through times of war and peace and amidst other countless challenges, the Constitution, built on the edifice of the sovereign socialist secular democratic republican structure, continues to strive to secure to its citizens Justice, Liberty, Equality and Fraternity. This historic document is the vehicle of life for us and is beautiful in its profound simplicity.

Constitution is the reflection of the vignettes from the different periods of history, ranging from Mohenjodaro in the Indus Valley, the Vedic Period, the Gupta and Maurya empires, the Mughal era, the colonial period to the national freedom movement. It speaks about 4000 years of rich history, tradition and culture of the Indian Subcontinent.

Fundamental Duties are essentially a part of our tradition, mythology, religions and practices and they are responsibilities integral to the Indian way of life. They are intended to serve as a constant reminder to every citizen that while the Constitution specifically conferred on them certain Fundamental Rights, it also requires citizens to observe certain basic norms of democratic conduct and behaviour, as rights and duties are co-relative.

Fundamental Duties have brought our Constitution in line with Article 29(1) of Universal Declaration of Human Rights which says we all have a duty to other people, and we should protect their rights and freedoms and it synchronized with the provisions in several modern Constitutions.

Constitution dictated rule by popular consent with laws enacted by people’s representatives. It introduced novel governmental doctrine and practices such as rule of law, checks and balances, separation of powers, federal and republican form of government, judicial review, and collective responsibility. It has prescribed the principles for guiding our nation, the mother of democracy and the expectations of people from the State. Its influence on the history of ideas and legal thinking has remained strong. However, there is equally a need to educate our citizens in the knowledge required to defend their rights and fundamental freedoms.

Importance of ‘We the People’

Every Society sets rules to live by. The chief aim of drafting the Constitution was to create a government to serve the citizens and with enough power to act at national and state levels, but without so much power that Fundamental Rights would be at risk. One way to accomplish this was to separate the powers of the State into three branches and then to include checks and balances on the powers to assure that no one branch of government gained supremacy. The powers of each branch are enunciated in the Constitution itself.

Constitution has also determined its relationship with the people. The primary consideration of our Constitution, no doubt, is the welfare of all.

The framers intended to establish a firm league of friendship of the Union with States and between the States. They knew well that making the States strong will make the Union strong. The Constitution in Article 1 affirmatively declares that India, that is Bharat, shall be a Union of States. Constitution recognized the importance of liberty. Jose Rizal, a Filipino nationalist and polymath, rightly asserts that without liberty, there is no light.

The soul of India is its Constitution. It is a ‘living tree’ capable of growth and expansion. It is organic and progressive and is the light, path, direction and foundation of its people. It is a great edifice raised with love and care. The amending process made the Constitution a living document that could be changed only with enough support to meet the changing needs of the time, without damaging its basic framework. It is said laws and rules that uplift all people sprout from the womb of a good Constitution. Let the Constitution guide India and its people forward, to be the model nation of the universe.

(The writer is a prominent lawyer, an acclaimed writer and a distinguished academician based in Kochi)